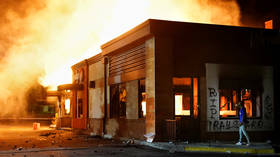 Fulton County District Attorney Paul Howard announced the charges, which include three counts of aggravated assault with a deadly weapon for allegedly firing his weapon “recklessly” in the effort to bring down Brooks, on Wednesday. In addition to felony murder, Rolfe has been charged with violating his oath as a police officer, for not properly arresting Brooks and for standing on his body after he fell to the ground.

Rolfe’s partner, Devin Brosnan, also faces three charges, including aggravated assault. Both have been asked to turn themselves in by Thursday. Howard suggested Rolfe be held without bond, while Brosnan – who has reportedly turned state’s evidence against his former partner – is to be given bail. Felony murder carries a potential sentence of life without parole, or even the death penalty, in Georgia.

Brooks was shot after Rolfe and Brosnan attempted to arrest him for failing a field sobriety test, having found him sleeping in his car in a Wendy’s drive-through last Friday. Most of his final moments were captured from multiple angles on the officers’ body cameras and the security cameras of the fast food restaurant. After wriggling out of the officers’ grasp, Brooks grabbed Brosnan’s taser and fired it in their direction before attempting to run away. Rolfe fired first his taser and then his gun three times, killing Brooks.

The racially-charged incident – Brooks was black, while the officers are white – fueled the unrest already roiling the streets of Atlanta, and some in the community have demanded the police be charged with murder over the incident. Atlanta’s police chief resigned after firing Rolfe and putting Brosnan on administrative duty. Mayor Keisha Lance Bottoms denounced the killing as a “murder.” Others – including Burke County Sheriff Alfonzo Williams, who is black – deemed it justified, since Brooks was armed and had attacked the cops.

The district attorney had a very different view, insisting Brooks never showed any hint of “aggressive behavior” during his interaction with Rolfe and Brosnan. On the contrary, it was Rolfe who treated Brooks unfairly by failing to provide timely medical attention, he said during a press conference on Wednesday, claiming the officer had even kicked the dying man as he lay on the ground.

Arguing the taser Brooks had stolen presented no danger to police because it had already been fired twice, Howard stated that Atlanta police policy prevents officers from firing anything – even a taser – at a fleeing suspect. However, two weeks earlier, the DA had charged multiple Atlanta cops with aggravated assault for allegedly using a taser on two college students, calling the device a “deadly weapon” in the arrest warrant.

The Wendy’s restaurant where Brooks was shot was set on fire on Saturday night, as protesters blocked a nearby highway. While video of the melee shows several protesters breaking the restaurant’s windows and entering the building, participants in the demonstration have attempted to distance themselves from the arson, pinning it on a white woman who is seen in different footage spraying something onto the building as it goes up in flames. Police have offered a $10,000 reward for information on those responsible for the fire.