With Donald Trump due to announce his nominee to replace the late Supreme Court Justice Ruth Bader Ginsburg, Democrats have taken to blaming the current state of affairs on 2016 Green Party candidate Jill Stein… again. 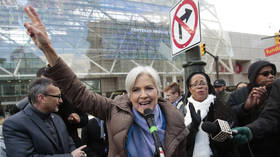 Democrats directed plenty of their ire at third-party voters after Hillary Clinton’s 2016 loss, but the arguments were re-energized on Saturday ahead of Trump announcing his Supreme Court pick – widely expected to be Judge Amy Coney Barrett, a conservative who has been described by critics as “anti-healthcare,” “anti-abortion,” and “anti-gun control.”

“Hope those Jill Stein votes were worth it,” Vox reporter Aaron Rupar tweeted, suggesting that Stein was somehow responsible for Trump’s victory. Liberal commentator Bill Palmer called on Stein voters to “atone” for their misdeed by working to get Joe Biden elected.

Amy Coney Barrett is anti-abortion, anti-gun control, anti-health care, and even seems to oppose same-sex marriage. She could sit on SCOTUS for 40 years. Hope those Jill Stein protest votes were worth it. https://t.co/Yw4ozNweP5

In an election with Trump as the GOP nominee, a vote for any third party candidate, whether it be Jill Stein, Jo Jorgensen or Howie Hawkins, is a vote for more kids torn from their parents, more lies, and more death in America.Raise your hand if you are voting for Joe Biden!

If you voted for Jill Stein in 2016, you should be spending every waking moment trying to atone for it by working to get Joe Biden elected in 2020. And if you don’t think you owe the world that, then go to hell.

“I hope you enjoy carrying your rape baby to term; you can name it Jill Stein,” Maher said in a lengthy diatribe against third-party voters.

Voters who chose to skip out on supporting a Democrat or Republican in the 2016 presidential election and instead cast their ballots for a third-party candidate pushed back on social media, though, slamming the claim that they handed conservatives the opportunity to nominate Supreme Court judges.

“I don’t owe you or the Democratic Party s**t. I’m an independent. No regrets for voting for Jill Stein. Stop nominating war criminals,” one Twitter user said.

Just a reminder that Gary Johnson got over 2x as many votes as Jill stein so actually, a third party saved Hillary from losing even WORSE than she did.

Bernie would cause Trump’s election, because she was THAT bad a candidate. And she CHOSE Trump herself, and had the media elevate him. That’s what happened. You all need to stop blaming everyone else. And you all owe @DrJillStein an apology.

“It’s not the fault of Jill Stein’s or Gary Johnson’s when a two-party candidate gets elected. Stop blaming 3rd parties for DnRs inability to nominate decent candidates, telling us we’re wasting our votes, then blaming us for the outcome,” current Libertarian Party presidential nominee Jo Jorgensen tweeted in reaction to the fresh wave of criticism.

Jorgensen also shared a chart showing that the number of people who opted out of voting altogether in 2016 is much larger than those who supported third-party candidates.

It’s not the fault of Jill Stein’s or Gary Johnson’s when a two-party candidate gets elected. Stop blaming 3rd parties for DnRs inability to nominate decent candidates, telling us we’re wasting our votes, then blaming us for the outcome.#Election2020#VoteGoldpic.twitter.com/9DywQG0flg

The claim that third-party votes lost Clinton the election is a debunked one, as it is based on an assumption that Stein voters would have voted for the Democrat Party had a third option not been available. Many presume that, since the Green Party is considered closer in ideology to the Democratic Party, Green voters would logically support Clinton. It’s a notion that is impossible to prove – and many third-party voters made it clear in 2016 they had no intention of ever casting a vote for Clinton.

One of Stein’s most prominent supporters, actress and activist Susan Sarandon, has made it clear on numerous occasions she does not regret skipping out on supporting Democrats in 2016, as she thought Clinton was “very dangerous” and would have started a new war.