A man shot dead at a protest in Austin, Texas, was armed with an AK-47 rifle, and told a local reporter that opponents of Black Lives Matter are “p**sies.” His death set off a partisan blame game online. 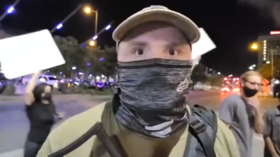 The victim, an adult male, was taken to hospital with “critical, life-threatening injuries” late on Saturday evening, where he died shortly afterwards. A police spokeswoman said he was attending a ‘Black Lives Matter’ protest in the city, and may have approached a passing car while brandishing a rifle.

The driver, who shot the victim from inside his vehicle, was taken into custody by police.

Local journalist Hiram Gilberto caught the incident on camera, and apparently interviewed the victim earlier in the evening. The man, identified as Garrett Foster, was armed with an AK-47 rifle, and told Gilberto that he carried the weapon to “practice some of our rights.”

Garrett Foster, the #BlackLivesMatter protester who was shot and killed tonight in Austin, TX, was interviewed with his AK47 (which he’s been legally open-carrying to protests for a while) by @imhiramlive just yesterday. #2ndAmendmentpic.twitter.com/IBckkkdNYG

Foster also said that “the people that hate us and want to say s**t to us are too big of p**sies to stop and do anything about it.”

The shooting set off an intense blame game online. Some right-wingers said that Foster approached the car with his weapon drawn, pointing to a video still that appeared to show the victim with his gun raised and pointed at the vehicle. They claimed that Foster shot first, as five large caliber shots can be heard first, followed by three smaller rounds, which they said were the ones that struck Foster.

It sure looks like that Austin rioter with the AK-47 is drawing it up as he and the mob approach the car. 🤷‍♂️ pic.twitter.com/qqmzo7LlVX

Others said that the suspect drove aggressively toward the crowd. They claimed that the first five gunshots were the driver’s, and the second volley came from a third party who fired back at the car. According to the New York Times, Foster “was not seeking out trouble,” and was wheeling his paraplegic fiance through an intersection when he was shot, based on interviews with his family and fellow protesters.

The Austin Police Department has not yet stated in detail how they believe the incident played out, but did note that two people opened fire. They added that the suspect is cooperating with their investigation.