ADD ‘BEATEN BY a Grand Duchy’ to ‘Drawing With A Mountaintop’ in the Dictionary of Abject Irish Football. The latter was a draw in Lichtenstein and at least came towards the end of Jack Charlton’s reign; this was a disastrous defeat from which the Kenny era may never recover.

Luxembourg has down just five World Cup qualifiers in their entire history before tonight, but Ireland invited Gerson Rodrigues 85th-minute winner after a torpid, moribund and fearful performance in which they created a single good goalscoring chance in an inflexible, defensive system.

The goal was scored by the only player with Champions League experience this season on the pitch, but Ireland were the higher-seeded side and cowed by the demand to go and win the game. Stephen Kenny stuck with his 3-5-2 from Belgrade and persisted with it throughout the entire game tonight, in spite of mounting evidence as minute after uneventful minute slipped torturously by.

Inconsistency of selection has been a hallmark of Kenny’s stint so far – he has never made fewer than three changes from game-to-game – and he made three tonight, albeit only one was out of his control: James Collins replaced the injured Aaron Connolly. Kenny replaced Jayson Molumby with Jason Knight and, more boldly, dropped goalkeeper Mark Travers for another debutant in teenager Gavin Bazunu.

Bazunu made his senior debut for Shamrock Rovers at 16 and here he made his senior international bow at 19, becoming the first teenage debutant goalkeeper in a European qualifier since Jan Oblak made his for Slovenia in 2012.

All of Kenny’s decisions are under the microscope nowadays, and this game threw up a weirdly specific test of that call, but Bazunu did not get chipped from distance when Gerson Rodrigues tried his luck from range in the closing stages of the first-half; back-pedalling and pushing the ball up and to safety from beneath his own crossbar.

Bazunu was loud, assured and arguably Ireland’s best player: that he was shone unforgiving light on what didn’t work.

Ireland again set up in their 3-5-2 system, but this time the emphasis was on them to be proactive and it was a test they largely failed. Luxembourg pressed higher on their left flank than the right to force Ireland to play out through the left side of their defence, namely Ciaran Clark and Enda Stevens.

Clark began by playing foolish ball into midfield to a heavily-marked Josh Cullen, a move that ended with Ireland losing possession and Vincent Thill warming Bazunu’s gloves from range. 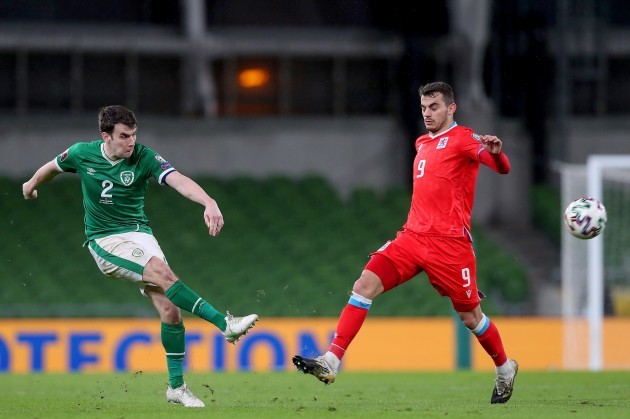 Suitably shook, Clark then played most of his passes up the line to Stevens or, lamentably, directly out of play. Dara O’Shea could be heard more than once telling Clark to play the ball infield for Cullen.

Luxembourg had set a roadblock Ireland couldn’t breach, and it was no coincidence their best chance of the game came from a move that began on the opposite side.

Matt Doherty drifted in side and switched play to Stevens, who cleverly sank into midfield. He fed Robinson out wide, who whipped a perfect cross across the six-yard box for Collins, who saw his effort ricochet off the Luxembourg ‘keeper Anthony Moris.

Ireland created almost nothing else, their passing slow and too often sideways.

Kenny’s answer was to change bodies rather than approach: Matt Doherty was replaced by Robbie Brady but Alan Browne dropped to right wing-back, while 15 minutes later Clark was replaced with McClean; Stevens slotting into Clark’s spot in the back three. It was Luxembourg who almost instantly profited from Kenny’s change however, with Vincent Thill barrelling through the Irish defence to force Bazunu into a save from close range.

Between those changes Alan Browne headed a Brady free-kick wide of the far post, and then, 15 minutes later, James Collins hooked an overhead kick wide of the near post. And…that was it.

Ireland’s passing was desperately hesitant and passive; when Kenny evaded questions as to whether this was a must-win game it was assumed he just wanted to avoid being hung by a headline, but his team played with an utter lack off urgency that suggested they took it to heart.

It was a passivity accentuated by Ireland’s system: why need three centre-backs, two holding midfielder and a pair of wing backs arguably out of position when in a position of desperation?

And then, five minutes from time, everything collapsed. Gerson Rodrigues picked up the ball from range, turned away from a challenge and rifled the ball in from range; it was a knockout blow Ireland’s poverty of ambition invited.

Kenny threw on Parrott and Molumby but Ireland were broken and confused but that point, and Luxembourg threw themselves at a couple of balls into the box and secured their famous win.

Kenny began his reign with the U21s with a win over Luxembourg, defeat tonight may have curdled his senior reign to a state form which it may never recover. Ireland won’t be going to the World Cup and have another six games to play out to prove the point, the only real glimmer of hope that this might be rock bottom.

Not that the lowest and most dejected thing in fortune always no fear: Stephen Kenny has to brace for a hideous post-mortem.