General Michael Flynn seems to be getting a lifeline from the attorney general following his claim that prosecutors in the Mueller investigation “concocted the alleged false statements” he was accused of making. 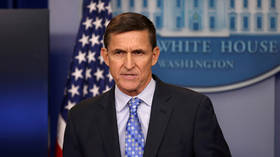 Attorney General William Barr has assigned an outside prosecutor to examine the criminal case against US President Donald Trump’s former national security advisor, according to a report from the New York Times.

St. Louis prosecutor Jeff Jenson is heading the team reexamining the Justice Department’s case against Flynn. The second look at Flynn’s case is part of a larger probe by Barr to go over politically-sensitive national security cases taken on in the last couple years by the Justice Department. Outside prosecutors have reportedly been grilling prosecutors in Washington about past cases and their reasons for taking them, in the hopes of finding political motivations.

Though General Flynn pleaded guilty to making false statements during the Mueller investigation, he filed a motion last month asking for the case to be withdrawn and his guilty plea to be overturned. Flynn claims prosecutors for the Justice Department “concocted the alleged ‘false statements.’”

Flynn claims when he did not want to stand by the false statements pushed on him by prosecutors, they threatened to put his son on the witness stand solely to “harass” him and make things more difficult for his family.

Flynn resigned from the White House in February 2017 and pleaded guilty to lying to the FBI about contact with then-Russian envoy to the US Sergey Kislyak regarding US sanctions. However, oddities have come to light since then like the fact that the FBI did not believe Flynn was lying at the beginning and one of the agents interviewing him was Peter Strzok, one of the infamous ‘FBI: Lovebirds’ who carried on an affair with lawyer Lisa Page during the Mueller investigation and the two exchanged anti-Trump text messages.

The general’s sentencing was supposed to be last month, but his motion for his case to be dismissed has indefinitely postponed the date.

The Justice Department has been put under a microscope by Barr and the president, who has been extremely critical of them since the beginning of the Mueller investigation.

Roger Stone, another Trump ally who was a victim of the investigation, was arrested last month in a raid for lying to Congress. Prosecutors recommended a hefty seven to nine year sentence for Stone, something the president tweeted his disapproval of. Prosecutors then backed off their recommendation, admitting it could be seen as “excessive and unwarranted,” with the lead attorney even withdrawing from the case.

Who are the four prosecutors (Mueller people?) who cut and ran after being exposed for recommending a ridiculous 9 year prison sentence to a man that got caught up in an investigation that was illegal, the Mueller Scam, and shouldn’t ever even have started? 13 Angry Democrats?