China’s top diplomat has shot back after the US and its allies in the G7 called on Beijing to abandon a hot-button national security law slated for Hong Kong, telling his American counterpart to respect Chinese sovereignty. 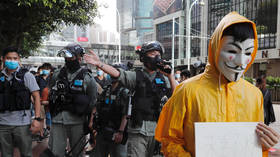 “China resolutely opposes the words and deeds of the US side interfering in Hong Kong affairs and resolutely opposes the statement made by the foreign ministers of the Group of Seven on Hong Kong-related issues,”  Yang Jiechi, the director of Beijing’s foreign affairs, said on Wednesday after meeting US Secretary of State Mike Pompeo for talks in Hawaii.

Earlier on Wednesday, the Group of Seven – which includes Canada, France, Germany, Italy, Japan, the UK and the US – issued a statement urging Beijing to rethink a national security law that critics say will erode Hong Kong’s autonomy and violate the “one country, two systems” principle which has governed the former British colony since its return to China. Yang argued that the G7 had no business lecturing Beijing on how to deal with Hong Kong, which while enjoying broad autonomy from Beijing, is still a part of China.

Hong Kong has been gripped by bouts of demonstrations and unrest since last year, sparked by a proposed extradition bill which would have given Beijing the power to transfer criminal suspects to mainland China for prosecution. While the bill was ultimately withdrawn, the protests continued, with activists – who were openly backed by the West – accusing the mainland of holding too much sway over Hong Kong.

The protests have enjoyed widespread support from American politicians and pundits. Siding with the demonstrators, the US Congress passed a bill last year that envisioned penalties for China if Hong Kong is found to lack autonomy. Pompeo, who was tasked with determining whether this was the case, last month certified before Congress that Hong Kong (according to the US State Department) is not autonomous enough. Washington has yet to announce any sanctions stemming from the bill, however.

Beijing has repeatedly slammed Washington’s support for the protesters, accusing the US of stirring up Hong Kong’s unrest with an ultimate goal of inciting regime change as well as of  “blackmailing” the city’s government into toeing Washington’s line with the new bill.