Protesters returned to the Justice Center in Portland for another night of orchestrated chaos on Thursday. Eyewitness footage from the scene captured the moment apparent Antifa members attacked a black protester calling for calm. 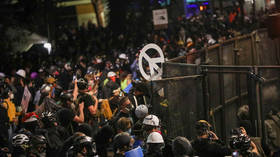 After repeated criticism of heavy-handed tactics, reportedly no police or federal agents were posted on the streets at the beginning of Thursday evening, instead remaining inside the courthouse and issuing repeated orders that protesters not target the exterior fence.

Despite this, several agitators in the crowd threw trash over and set it on fire at the fence, which quickly descended into a flashpoint for scuffles on the front lines among the protesters themselves, as captured by eyewitness video.

Two BLM protesters tried to calm the group assaulting the fence, but they were shouted down. Footage from the scene even shows one of them being attacked.

2 black men are defending the fence guarding the Federal Courthouse in #portlandpic.twitter.com/hzb7f0T80A

Philip Anderson Is In The House. Guarding The Fence From Protesters At The Federal Building . #Portlandprotest#blacklivesmatter#PDXprotests#pdx#oregon#blm#acab#northprecinct#portland#Antifa#BlueLivesMatter#Trump2020#KAG2020#NFAC#SJW#JusticeCenter#RiotRibs#CLATpic.twitter.com/pEJkZRx73Q

Scuffle breaks out on the front lines of federal courthouse Things are escalating pic.twitter.com/iq3KnNHz29

Thousands of peaceful protesters had gathered earlier in the night near the steps of the nearby Justice Center, in a protest organized by the Portland chapter of the NAACP.

Just after 9:30pm in Portland. There’s at least 2,000 in this crowd already. More continue to arrive: pic.twitter.com/qn4ERRUJbQ

“The focus has been moved from where it is supposed to be and made to be a spectacle,” said ED Mondaine, a Portland pastor and president of the local NAACP. This march ended at 9pm local time but some of the crowd remained behind to try and ease tensions. This was to no avail, however, as the situation became increasingly violent as the night progressed.

After barrages of fireworks and assorted missiles were launched at the Federal Courthouse where authorities were holed up, police emerged and began clearing the streets with tear gas and non-lethal munitions as they have done for weeks.

Meanwhile, several protesters with leafblowers created a so-called “tear gas tornado” on the streets while others danced.

Some prankster protesters blared the siren from cult-classic film ‘The Purge’, while others played the ‘Imperial March’ from the ‘Star Wars’ franchise to add some more cinematic flare to the already theatrical chaos.

Portland City Mayor Ted Wheeler was tear-gassed while attempting to show solidarity with the protesters on Wednesday and was branded “pathetic” by President Trump in an interview with Fox News.