A black Trump supporter was reportedly attacked and stabbed by a protester amid increasingly violent demonstrations in Portland that have rocked the Oregon city for weeks. Police have made an arrest in connection to the incident. 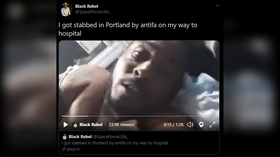 Drew Duncomb, a Trump supporter and anti-Antifa activist, said that he had been stabbed while walking around downtown Portland in the early hours of Saturday. In a brief video message that he made while being transported to the hospital in an ambulance, Duncomb claimed that he had been attacked by an “Antifa dude” who had been “following me around for a while.”

I got stabbed in Portland by antifa on my way to hospital https://t.co/H745d2next

In the clip, Duncomb appears disoriented and confused as he lies on a stretcher. He said that he didn’t know how serious his injuries are.

In a press release, Portland Police said law enforcement responded to a report of a stabbing at around 2:30am. Officers were able to locate the victim, believed to be Doncomb, and transport him to the hospital. A video emerged which purportedly shows the suspect being arrested.

A man, believed to be Duncomb’s attacker, was later charged with felony assault. His bail was set at $250,000.

There was an alleged stabbing At a protest/riot against the police in Portland Can you guess who the protesters/rioters called to respond to the incident? You guessed it: THE POLICE!Then they harassed the officers making the arrestRidiculous! pic.twitter.com/wFXZbI9YaB

However, while responding to the incident police were reportedly subjected to verbal abuse, with one video even showing a protester kicking the door of a police vehicle.

Antifa has no respect for the law. The police in Portland are effectively useless thanks to the city. Officers were responding to a call about an alleged stabbing situation and here’s how they were treated. pic.twitter.com/Ayt0WZHOKr

In an update video from the hospital, Duncomb said that the stab wound miraculously missed vital organs and arteries. He said the attack shows that there’s no free speech allowed in Portland and blamed Twitter for allowing Antifa activists to dox him. He added that, if he found any link between the man who stabbed him and Portland’s Rose City Antifa group, he would “rain hell” on the organization.

Duncomb wasn’t the only black man attacked during the recent demonstrations. On Friday, another man was assaulted by protesters after protecting the fence outside the city’s federal courthouse and urging for calm.

The demonstration was declared an unlawful assembly early on Saturday morning, after police and federal agents were attacked with projectiles, lasers, and fireworks. Demonstrators also used power tools in an attempt to dismantle the fence outside the Justice Center.