Italian opera singer Andrea Bocelli, a symbol of hope during the coronavirus outbreak, said he was “offended” by the strict quarantine rules. Addressing the Senate, he admitted violating the “unhealthy” lockdown himself. 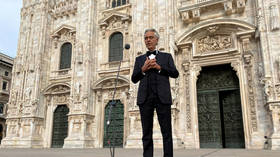 The famous blind tenor attacked the government’s coronavirus response during a conference in Italy’s Senate.

I felt humiliated and offended. I could not leave the house even though I had committed no crime.”

“I must confess – and I do it here publicly – that I have also willingly violated the ban [on leaving the house]because it did not seem right or healthy. I am of a certain age, and I need the sunlight and vitamin D,” the singer said.

Bocelli, 61, told reporters that he has been “expressing doubts about the seriousness of this so-called pandemic.”

“I know many people but none of them had ended up in intensive care. So what was all this sense of gravity for?” he asked. The singer also seemed to encourage people to socialize amid the outbreak by saying that they should “move around, get to know each other.”

Bocelli’s comments attracted criticism online as users pointed out that Italy was among the world’s worst-hit countries, with more than 35,000 deaths from Covid-19. Popular rapper Fedez wrote that he was left “speechless” by Bocelli’s words, and tweeted a photo of his friend who he said had undergone a lung transplant because of the coronavirus.

Following the backlash, the opera star argued that his speech in the Senate has been “misunderstood.” Bocelli rejected accusations of being a Covid-19 “denier,” saying that his own foundation is helping coronavirus patients. “I am not a denier, I am an optimist,” he said.

Bocelli himself became a symbol of hope and unity during the outbreak when he performed inside an empty cathedral in Milan in April.

In March, Italy became the first nation in Europe to impose strict quarantine rules. The virus hit the northern Lombardy region, quickly overwhelming local hospitals, and continued to rapidly spread across the country, forcing the government to declare a nationwide lockdown the same month.

As the situation improved, the government had lifted or relaxed many restrictions since May.