An alcoholic pet monkey has been locked up for good in Uttar Pradesh after a terror spree that left 250 people injured and one dead. Efforts to rehabilitate the animal were scrapped and zoo doctors affirm he’s a menace to society. 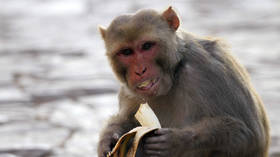 The six-year-old monkey, named Kalua, received a life sentence of solitary confinement at India’s Kanpur Zoo this week after repeated attempts at normalizing his behavior left zookeepers and other monkeys much the worse for wear. Zoo doctor Mohd Nasir told local media the savage simian would harm people wherever he went if set free, explaining “he remains as aggressive as he was” when first brought to the zoo three years ago.

Kalua formerly belonged to an occultist in Mirzapur district, who fed him a diet of meat and copious alcohol. When his owner died, the grieving pet apparently went into withdrawal, becoming vicious and attacking locals. By the time forest and zoo teams succeeded in apprehending the aggressive creature, he had bitten over 250 people, including 30 children. One of his victims died of the injuries, while others – Kalua apparently has a thing for attacking women and girls – were left in need of plastic surgery.

While the zookeepers had hoped to calm Kalua down, substituting a vegetarian diet for the human flesh he’d apparently come to rely on, they didn’t have much luck. The carnivorous creature has stayed hostile, especially toward female zookeepers, and plans to release him back into the wild a changed monkey have been shelved.

Kalua’s misbehavior predates the coronavirus outbreak, but he’s not the only monkey in Uttar Pradesh to make the news in recent weeks. A gang of monkeys attacked a lab technician in Meerut last month, stealing several blood samples taken from Covid-19 patients and running off with them in a scene that seemed lifted straight out of a Hollywood pandemic film.