There is no provision for engagement with residents under the current inspection regime, said Doireann Ansbro, ICCL’s Head of Legal and Policy.

THE IRISH COUNCIL For Civil Liberties [ICCL] has called for human rights-focused, independent inspections of Ireland’s Direct Provision centres to be implemented as Government transitions to a new system for asylum seekers.

Covid-19 has highlighted the inadequacies within Ireland’s current regime of inspection, the ICCL has said, calling on Government to ratify a UN protocol known as OPCAT which would allow independent inspections to take place.

Inspections at centres are currently carried out by officials at the State-run International Protection Accommodation Service [IPAS] and private contractor QTS Ltd.

Due to Covid-19, however, inspections were suspended between March and September 2020.  Inspection reports, which are published by IPAS, focus primarily on living conditions at centres including rooms, fire safety and meals.

There is no provision for engagement with residents, said Doireann Ansbro, ICCL’s Head of Legal and Policy.

“The Government is supposed to ensure the highest standards for everyone in State care, including in Direct Provision centres,” said Ansbro.

“We need to know people are safe and that’s why it is vital that until this system is dismantled we have human rights-focused, independent inspections of every centre in Ireland.

ICCL has campaigned for 14 years for Government to ratify OPCAT, the UN protocol that obliges States to create an independent body in order to ensure people are treated humanely.

This is done by setting up a system of independent inspectors who can make unannounced visits and engage with people living in certain settings.

Despite Ireland signing up to the UN protocol in 2017, it has not ratified it, a move ICCL described as simply “lip service”.

It follows a Government commitment last month to end Direct Provision and replace it with a new system, which will include independent inspections.

Only three inspections were carried out at Direct Provision centres last year between March and September due to Covid-19, despite there being more than 80 contracted locations where International Protection Applicants live.

Over 100 inspection reports were published last year compared to 65 in 2020.  The Journal has previously highlighted a lack of oversight at centres – including Emergency Accommodation, which the State has contracted since January 2018 to house asylum seekers.

An inspection carried out on 2 October at Davis Lane in Mallow, Cork – a self-contained centre for 52 asylum seekers – found fire exits were not clear of obstruction and hinges were missing from fire doors in 10 of the 13 units. 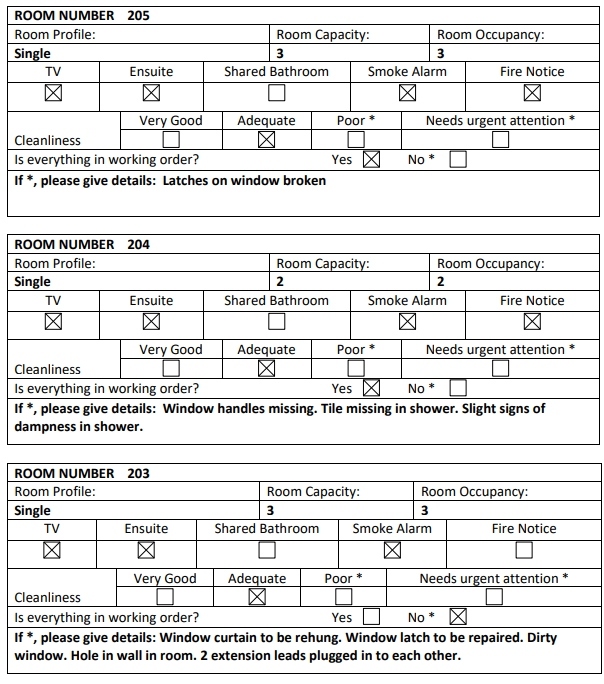 IPAS found evidence of mould and a lack of ventilation in rooms at Viking House Direct Provision centre in Waterford.

An Expert Advisory Group chaired by Dr Catherine Day recommended in a report last October that the Health Information and Quality Authority [HIQA] carry out inspections of Direct Provision centres in Ireland.

The Government’s White Paper for ending Direct Provision by 2024 has also committed to an independent inspection regime, but stopped short of excluding IPAS from carrying out inspections.

It said “HIQA will monitor existing Centres against agreed standards during [a]transitional period.”

“It is 20 years too late” for improvement in Direct Provision, said Bulelani Mfaco,  Movement of Asylum Seekers in Ireland [MASI], who lives in Knockalisheen Direct Provision Centre, Limerick.

“Inspections won’t change a lack of autonomy, privacy or being able to have meaningful social and sexual relationships,” said Mfaco, who described Ireland’s current inspection regime as “useless”.

“Inspecting a building to see if a light bulb works doesn’t restore my dignity.”

Minister for Children, Equality, Disability, Integration & Youth Roderic O’Gorman said last week that “it is hoped that HIQA will begin this role shortly.”

“A strong and transparent monitoring capacity is crucial to ensure that quality of service is maintained during the significant transformation process that will occur over the coming years,” he said.

A spokesperson for HIQA said discussions with Government have taken place. These included a revision of HIQA’s legal powers to allow inspections at Direct Provision centres to take place.

“This timeline is dependent on the legislative changes being made to allow HIQA to do this and the allocations of funding to the programme,” they said.

“The required legislative changes and allocation of resources are the responsibility of The Department.”