Rome was built on slavery and slave labor, and now the man behind it will finally pay for his sins. That could have been the logic of unknown vandals who defaced the statue of Julius Caesar in the capital of Belgium. 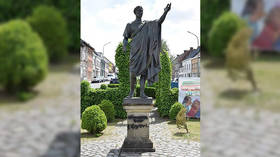 The incident which happened over the weekend left locals questioning the motives of the damage, the Brussels Times reports.

Vandals scrawled the word “krapuul” (crook) on the base of the statue of Caesar in Velzeke, East Flanders. The spear which Caesar held in one hand was also torn off.

Local authorities are investigating the incident. “We will estimate more precisely on Monday the extent of the damage and the repairs to be carried out. These will be at the expense of the perpetrators,” said Mayor Jenne De Potter.

It is still unclear whether there is a link between this act and a wave of monument vandalism inspired by the Black Lives Matter movement. In Belgium, there’s been a focus on statues of King Leopold II. He declared himself sole owner of the Congo Free State in the late 1800s, and forced the locals to extract resources from the territory for his own benefit. It is estimated that millions died as a result of Belgium’s colonial exploits. In the past weeks statues of the king were removed across the country, following other monuments falling to protests around the world.

Activists in the US and Europe have been targeting confederate statues and monuments to Christopher Columbus, which have been attacked and toppled in several cities across the United States, while different slave trader monuments have been targeted in Europe.