Overall grocery spending has dipped compared to a boom this time last year.

COVID-19 RESTRICTIONS MAY have changed how we mark annual holidays but they didn’t stop people stocking up on alcohol for St Patrick’s Day and chocolate for Mother’s Day and Easter.

Bumper alcohol sales around the national holiday on 17 March helped power a 25% growth in drink purchases over the first 12 weeks of the year.

Kantar has released its latest grocery figures for the period ending 21 March and they show that Guinness was the big winner in the booze buying binge, with 10% of the Irish population putting it in their trolleys at the supermarket.

This is an increase from 6% the previous year, meaning an extra 70,000 households took the popular stout home.

Kantar retail analyst Emer Healy says time apart from loved ones due to restrictions means that occasions like Mother’s Day are more significant this year than in the past.

“Shoppers are more willing to splash out, and as a result sales of gift boxes of chocolate soared by €2.9 million in the most recent period,” she said.

The latest stats only capture part of the run-up to Easter, however they reveal that sales of chocolate eggs boomed by 124%, as an additional €18.1 million was spent.

A spell of good weather also prompted many people to fire up barbecues. This led to an additional €1.3 million being spent on chilled burgers and grills. A total of €6.7 million was also spent on ice-cream in the 12-week period.

The Kantar stats show that grocery market growth has slowed to 8.4% year on year. The four weeks to 21 March saw a 5.5% decline in sales as people spent €59.3 million less than in March 2020, when they were stocking up ahead of the first national lockdown.

“Even with March sales down compared to 2020, they remain almost 20% higher than in 2019. Two-year ending growth figures allow us to look at how the retailers are performing compared with what we would typically expect at this time of year, and the numbers show a strong increase in sales,” Healy said.

This will likely continue until pubs, restaurants, workspaces and schools reopen and shoppers start moving spend on to food and drink out and about as well as in home.

The Kantar Worldpanel supermarket shares show that SuperValu has maintained its position as Ireland’s most popular supermarket. The chain grew ahead of the market in the past 12 weeks, with sales up by nearly 14%, giving it a 22.4% market share.

Shoppers tend to make large trips to SuperValu and basket sizes continue to grow. It also was the only retailer to increase the number of visitors to its stores in the latest period, which contributed an additional €2.9 million to its overall performance. 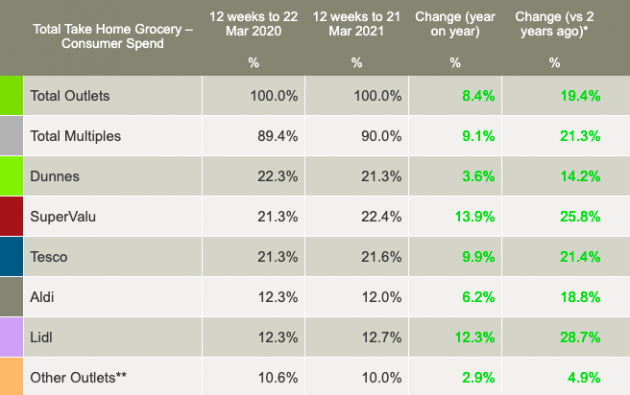 Lidl’s growth was also strong, increasing by 12.3% over the 12 weeks, it also increased share and now holds 12.7% of the market.

Aldi has fallen behind its German rival and currently has a 12% share of the market, it made particular gains in Munster where sales increased by 7.7%.