One civilian was killed and several others were injured by artillery fire near a mosque after the Pakistani army violated a ceasefire in disputed Kashmir, India’s police chief has said. 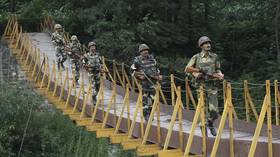 The district’s Superintendent of Police Ramesh Kumar Angral said that a shell exploded near a mosque in the Shahpur area, killing a civilian and injuring three others when they were heading for Friday prayers. Other reports said that four people were injured. The Pakistani military did not comment on the alleged incident.

On Thursday, the Indian army and police busted a weapons cache belonging to local militant groups, recovering several pieces of firearms and ammunition.

Firefights and shelling frequently occur along the LoC, causing personnel and civilian casualties on both sides. India and Pakistan typically blame each other for the incidents and say they only open fire in self-defense. New Delhi also launches raids against various insurgent groups, which it says are backed and armed by Islamabad.

Friday marks the one-year anniversary of the suicide bombing of an Indian convoy in Kashmir’s Pulwama District during which 40 military policemen were killed. Jihadist group Jaish-e-Mohammed (JeM) claimed responsibility for the attack, after which New Delhi sent jets to strike what it said were militant camps on Pakistani soil. Islamabad accused India of violating its sovereignty.

The hostilities then escalated into cross-border shelling and open aerial combat between the neighbors in February 2019. An Indian pilot was shot down in Pakistani airspace during the clashes, and was later handed over by Islamabad to New Delhi unharmed.

The tensions on the ground in Kashmir increased further after India revoked the region’s long-standing autonomy last August, and reorganized it. Indian officials argued that the move was necessary to combat terrorism. The government also said better integration of Kashmir into the rest of India will bolster its development.

Pakistan, for its part, heavily criticized the move, saying that it will trigger more violence.