Former national security adviser John Bolton has leaked excerpts of his book to major newspapers, accusing President Donald Trump of colluding with leaders in China and Turkey, and obstruction of justice “as a way of life.” 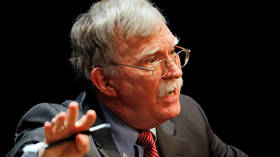 Facing a DOJ lawsuit seeking to block the publication of his memoir for containing classified information, Bolton decided to go to the press, leaking parts of the book to the New York Times, the Washington Post, and the Wall Street Journal on Wednesday.

Breaking News: John Bolton says in his new book that the House should have investigated President Trump for potentially impeachable actions beyond Ukraine https://t.co/8lpd4xAzYu

Bolton famously refused to testify before the Democrat-led impeachment proceedings against Trump over his alleged abuse of power regarding Ukraine, but now claims that they should have expanded the probe to include “a variety of instances when he sought to intervene in law enforcement matters for political reasons.”

He accuses Trump of wanting to “in effect, give personal favors to dictators he liked,” bringing up companies in China and Turkey as examples, according to the Times. “The pattern looked like obstruction of justice as a way of life, which we couldn’t accept,” the Times quoted him as saying.

One of the Bolton “bombshells” is that he sought China’s purchase of US soybeans in order to get re-elected, during trade negotiations with President Xi Jinping.

SOYBEAN DIPLOMACY: The WSJ has published an excerpt of @AmbJohnBolton’s forthcoming book, revealing Trump-Xi conversation and how the American president pleaded his Chinese counterpart to buy U.S. soybeans so he could win farm states in the 2020 presidential elections | #OATTpic.twitter.com/XKAogLCCtN

An excerpt in the Wall Street Journal has Trump telling Xi that alleged concentration camps for Uighur Muslims in China’s Xinjiang Province were “exactly the right thing to do.” It also alleges that Trump did Xi a favor by relaxing US sanctions on ZTE, a Chinese telecom company.

It emerges as Trump signed into law the Uyghur Human Rights Policy Act of 2020, which mandates US sanctions against Chinese officials over the “systematic use of indoctrination camps, forced labor, and intrusive surveillance to eradicate the ethnic identity and religious beliefs of Uyghurs and other minorities in China.”

According to Bolton, Trump told Xi to “go ahead with building the camps” for imprisoned Uighurs.

As further proof of Trump’s perfidy, Bolton writes that the president told Xi that he would like to stay in office beyond the two terms that the US Constitution would allow him. Bolton’s one-time colleague Dinesh D’Souza commented that Bolton was unable to recognize a clear joke.

Really? This is it? John Bolton’s smoking gun? Trump has been jokingly putting out memes about this for four years. This conversation, if it occurred at all, seems obviously jocular. Bolton, however, whom I knew quite well from AEI, doesn’t have a jocular bone in his body pic.twitter.com/Qe8sXCAT58

Trump has on more than one occasion shared a meme showing him staying in power forever, triggering Democrats into denouncing him as an aspiring dictator. Apparently, Bolton thought the same.

According to John Bolton posting this meme was an impeachable offense https://t.co/q2BHlfVTEu

The mustachioed war-hawk served as Trump’s national security adviser from April 2018 until September 2019. While the exact reason for his firing was never revealed, Trump has since commented that Bolton was interfering with his peace initiatives and had “never seen a war he didn’t like.”

Indeed, the “most irrational thing” Bolton accuses Trump of was to refuse to bomb Iran in June 2019, according to the New York Times excerpt.

Pretty telling that the episode which pissed off Bolton the most during his tenure was Trump calling off airstrikes which would have killed dozens of Iranian soldiers in June 2019 https://t.co/ruFSInj2Mupic.twitter.com/5zO7UrxMTM

Arguing that Trump is being “soft on China” and colluding with Xi also happens to be a Democratic Party strategy for the 2020 presidential election, outlined in April and reported by Axios.

While Democrats and the mainstream media welcomed Bolton’s bombshells as validating their position on Trump, he is unlikely to become a #Resistance hero, simply because they still remember that he refused to say these things under oath during the impeachment hearings, when they – in theory – could have bolstered their case for getting Trump out of office.

As for Trump supporters, many were indifferent about Bolton’s betrayal, noting that Trump hired the neocon in the first place and kept him on for over a year, while ditching the faithful General Michael Flynn after less than two weeks on the job, following an FBI ambush and a Washington Post hit job.

Do I care that Bolton is stabbing Trump in the back? Not at all. General Flynn was NSA and Trump made his choices.Being outraged on behalf of a 70+ year old man who makes poor choices is well beyond my job description.