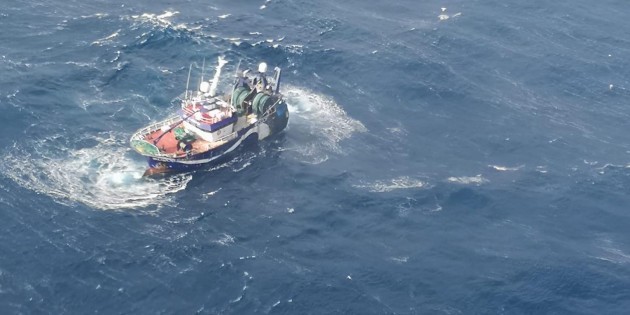 THE RESCUE OF a trawler off the coast of Cork resumed today, with the Irish Naval Service ship now towing it to safety.

The Irish-registered Ellie Adhamh was drifting without power since yesterday.

A tug attempted to reach the vessel but was escorted back to shore by the RNLI due to rough seas. Several windows on the Ellie Adham have been smashed by high waves.

The operation is now focused on the LÉ George Bernard Shaw towing the ship ashore.

The Rescue 115 Coast Guard helicopter and RNLI lifeboat are also tasked in the rescue, among others, as conditions remain precarious.

The helicopter dropped equipment to the trawler at first light allowing it to communicate with the naval vessel.

An initial attempt by the LÉ George Bernard Shaw to tow the vessel failed due to poor weather. Rescue 115 then dropped pumping equipment to the trawler as it was taking on water.

A second attempt to tow the vessel was successful and is currently underway.

“This is a multi-agency operation currently underway in a complex and challenging environment,” a statement from the Defence Forces.

UPDATE: LÉ #GEORGEBERNARDSHAW tasked by @IrishCoastGuard (IRCG) as OSC for the op. Helo #R115 made contact with the FV this afternoon. Crew remain with the FV. Conditions on scene are poor with an 8-10m swell. #R115 & #R117 on Standby. #P64 will assess the situation for a tow. pic.twitter.com/vzFDkeqZOC