THE reopening date for gyms and nail bars has finally been revealed by Oliver Dowden.

Mr Dowden announced on Thursday that gyms, beauty salons and swimming pools can resume operation in the coming weeks – with new social-distancing measures.

Meanwhile, people in ‘high risk’ occupations will be tested for coronavirus even if they showing no symptoms with jobs including taxi drivers, cleaners and shop workers – the Department of Health has announced.

And Chancellor Rishi Sunak unveiled a host of new measures to get Britain’s economy moving again in a mini-Budget such as a six-month stamp duty holiday for homes up to £500,000.

But the director general of the World Health Organisation has revealed that in some countries, Covid-19 is getting worse and not under control “in most of the world”.

Follow the latest news and updates surrounding coronavirus below…

NO NEW DEATHS IN WALES

There are no new deaths of people who tested positive for coronavirus in Wales, with the number remaining at 1,540, Public Health Wales has said.

Meanwhile, the total number of cases in the country increased by 10 to 15,939.

The state of Victoria in Australia has recorded a record rise in cases, as 288 further infections were reported.

It comes as Prime Minister Scott Morrison said that the number of citizens and permanent residents allowed to return to Australia each week will be reduced by more than 4,000 from next week.

Victoria has banned international arrivals following a worrying spike in cases that sent capital Melbourne back into lockdown.

COVID-19 PANDEMIC ‘ACCELERATING’ AND ‘GETTING WORSE’, WHO SAYS

The World Health Organisation has warned the coronavirus pandemic has still not reached its peak, and is still “getting worse” in many parts of the globe.

Director general of the WHO, Dr Tedros Adhanom Ghebreyesus, said the virus is not under control “in most of the world” a member state briefing on the pandemic evaluation today.

He said: “The virus has upended health systems in some of the world’s wealthiest nations, while some countries that have mounted a successful response have been of modest means.

“We know that when countries take a comprehensive approach based on fundamental public health measures – such as find, isolate, test and treat cases, and trace and quarantine contacts – the outbreak can be brought under control.

“But in most of the world the virus is not under control. It is getting worse.”

A further 22 people who tested positive for coronavirus have died in hospital in England, the NHS have confirmed.

This brings the total number of confirmed deaths in hospitals to 29,013.

The patients were aged between 52 and 99 and all of them had known underlying health conditions.

CRUISE HOLIDAYS STILL OFF THE CARDS

The Government has said all cruise holidays are still banned.

The Foreign and Commonwealth Office (FCO) has today changed its advice, urging all holidaymakers against boarding cruise ships.

The Government had previously urged over-70s to avoid sailings.

The current advice states: “The Foreign & Commonwealth Office advises against cruise ship travel at this time. This is due to the ongoing pandemic and is based on medical advice from Public Health England.

“The government will continue to review its cruise ship travel advice based on the latest medical advice.”

R RATE GOES UP IN ENGLAND 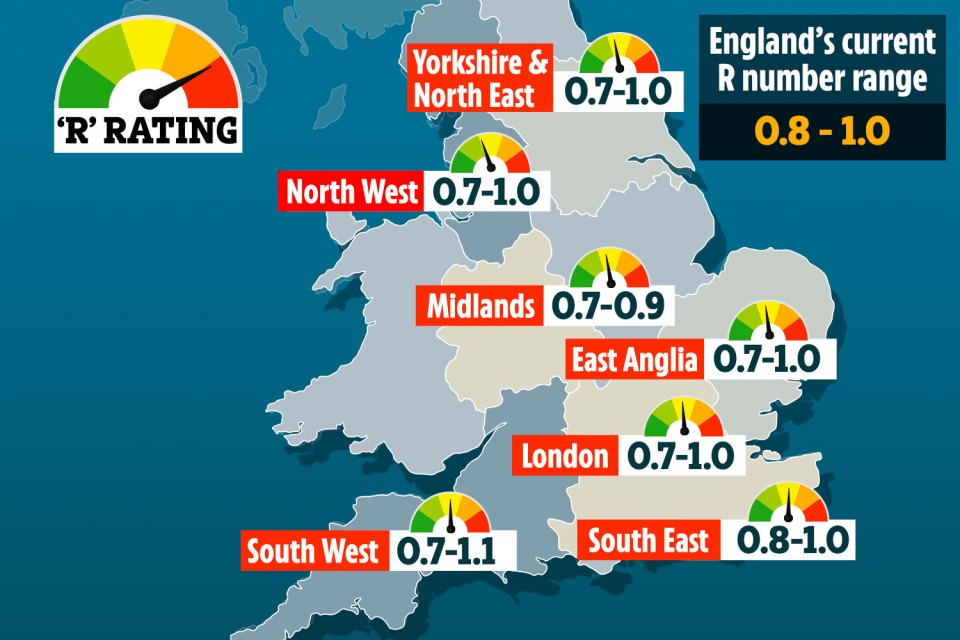 Nicola Sturgeon has warned easing lockdown restrictions must not lead to Scots letting down their guard, as she revealed the highest number of new cases of the virus for three weeks.

Speaking at the Scottish Government’s daily coronavirus briefing on Friday, the First Minister said 18 people have tested positive for Covid-19 since Wednesday- taking the total to 18,333.

While the number of new cases remains “very low”, she said, the rise is being “looked at very closely” and serves as a reminder the virus has not gone away.

At least 23 guests at a wedding, including the bride and her mother, were struck down with coronavirus, putting a Spanish tourist destination on high alert.

More than 35,000 residents of Tudela in Navarra are being advised to wear masks and stick to social distancing to prevent the disease spreading even further.

The mayor of Tudela, Alejandro Toquero has made a plea for “collective and individual responsibility” and says he is in close contact with the health authority to monitor developments.

An investigation is already underway to try and find the source of the new outbreak.

The mayor has warned that if there are further outbreaks, restrictions could be reimposed by the Government of Navarra and Tudela city council.

“Once again, responsibility is requested and an appeal is made to continue with the measures of social distancing and a mask,” he appealed.

Police Scotland officers and staff were subjected to almost 90 coronavirus-related attacks in the first few weeks of lockdown, figures show.

The Scottish Conservatives, who obtained the data, said it was “abhorrent” key workers had suffered the assaults.

Police Scotland revealed its officers and other staff members were subjected to 265 assaults in the period March 24 to April 30.

Theses included 89 attacks classed as coronavirus-related, where officers were, for example, coughed or spat on. 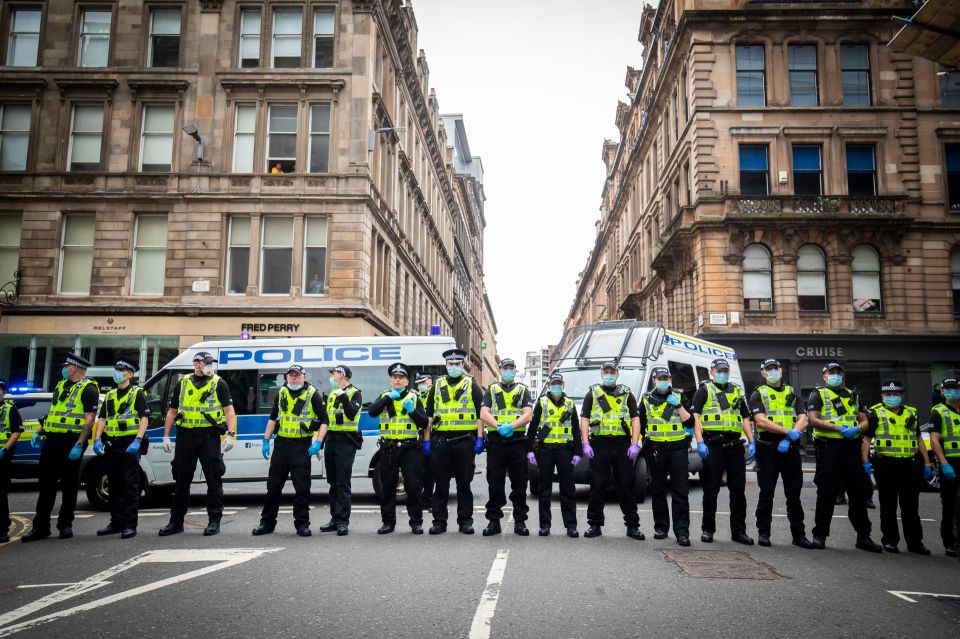 Nicola Sturgeon said 18,333 people have tested positive for coronavirus in Scotland, up by 18 from 18,315 on Thursday.

This is the highest rise in positive cases in almost three weeks, she said, which the Scottish Government will be “looking very closely” at.

There are 668 people in hospital with confirmed or suspected Covid-19, up 22 in the past 24 hours.

Of these patients, 12 were in intensive care, a rise of three.

NO DEATHS IN SCOTLAND FOR SECOND DAY RUNNING

No new coronavirus deaths have been recorded in Scotland for the second day running, Nicola Sturgeon has announced.

The First Minister told the Scottish Government’s coronavirus briefing 2,490 patients have died in Scotland after testing positive for Covid-19, no change since Wednesday. 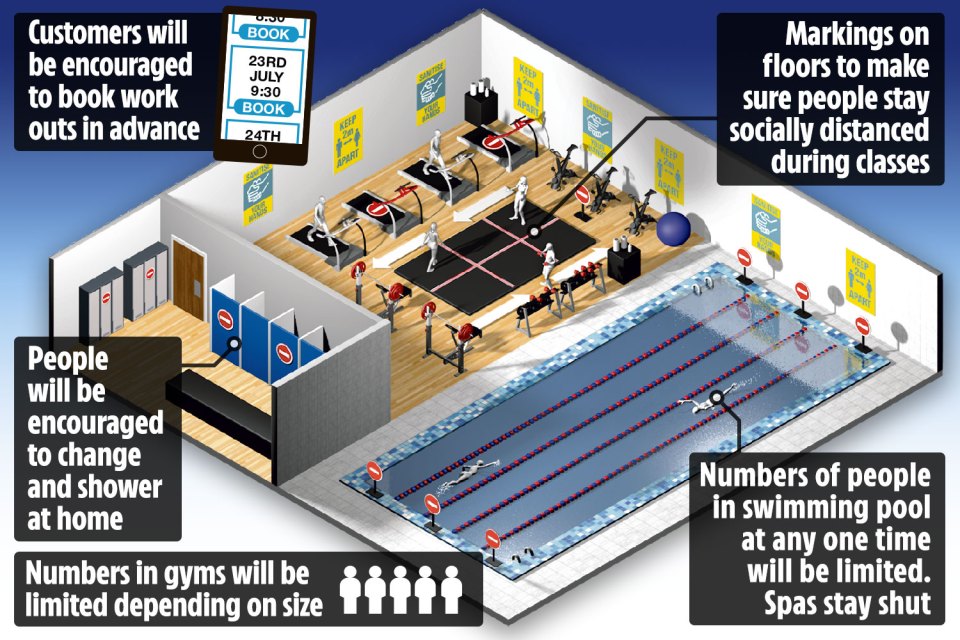 CORONAVIRUS IN THE US – BY NUMBERS

Coronavirus testing kits will be delivered to parts of Scotland – using DRONES.

Drone firm Skyports will also deliver medicine and personal protective equipment (PPE) to hospitals and medical practices in Argyll and Bute, off the west coast of Scotland.

The drones will cut the pick-up and drop-off time of the essential kit between healthcare sites from 48 hours to just 30 minutes.

It comes thanks to a funding scheme from the UK and European Space Agencies designed to find ways space-tech firms can support the NHS.

Drones are said to be faster and can travel more directly and frequently between an island’s GP surgery and an NHS lab, than by road and ferry.

Skyports conducted a two week trial of the delivery scheme in May with support from NHS Highland.

The flights over the 12 miles between Oban and the Isle of Mull took 15 minutes, far faster than the time taken by road and ferry.

The live flights will take place later this year.

Not a single person has been fined by police in England and Wales for breaching quarantine rules after arriving from abroad, new figures show.

Just 10 tickets were handed out to passengers for not wearing face coverings on public transport, according to the data released by the National Police Chiefs’ Council on Friday.

The figures come as quarantine rules for people returning to or visiting the UK from a list of countries, including popular holiday destinations, were relaxed from Friday.

The 14-day self-isolation policy for UK arrivals, bar a handful of exemptions, was introduced on June 8, with breaches punishable of fines of between £100 and £1,000.

It was met with fierce criticism over the impact on the UK’s travel, tourism and hospitality industries.

EIGHT AREAS OF ENGLAND WHERE COVID CASES HAVE JUMPED 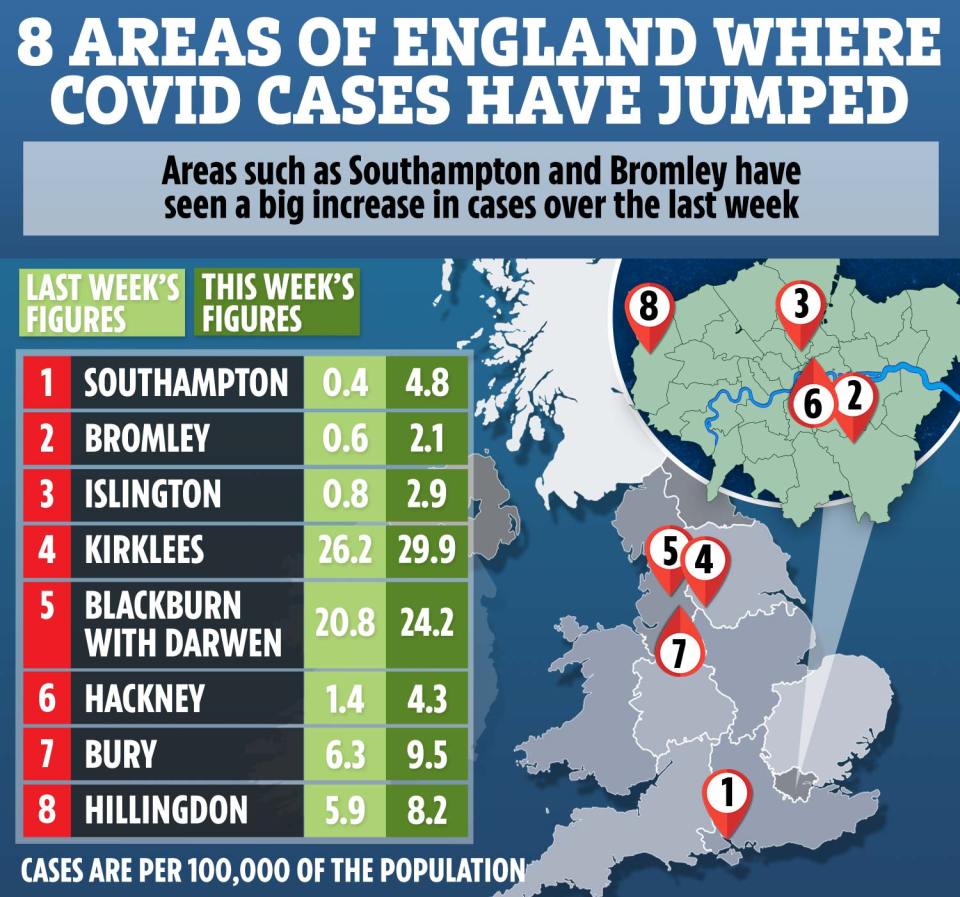 Boris Johnson has thanked school leavers for making “sacrifices” that will have saved many lives amid the coronavirus pandemic.

In a virtual address to teenagers, he said: “And now, as many of you are missing out once again on parties, festivals, presentations, perhaps even long-planned holidays, I want you to know that your efforts have been worth it. Because of you, because of your sacrifice, we’ve saved hundreds of thousands of lives.

“And that’s not something many generations will be able to say about their final weeks of school, not your elder siblings, certainly not your parents.”

HALF OF BRITS WEARING FACE MASKS

Latest figures from the Office for National Statistics suggest more than half (52 per cent) of adults in Britain who left their home in the week before being surveyed had worn a face covering.

The survey was conducted between July 2-5 and is up from the previous week, when 43% reported doing so.

Regardless of whether they had worn a face covering previously, 58 per cent of the 1,788 adults said they were very or fairly likely to wear one in the next seven days.

A beachgoer has donned a face mask – across his butt as the protective gear is made mandatory in Spain.

The bizzare snap, taken on a Barcelona beach, emerged as the autonomous Spanish region of Catalonia introduced a £90 fine for anyone not wearing a mask. 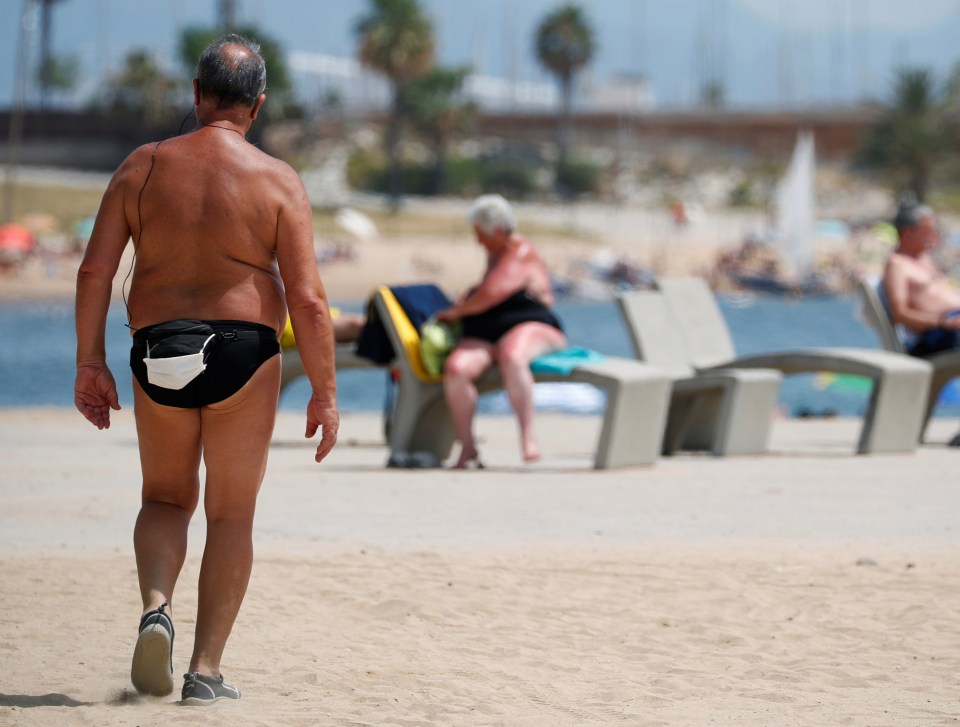 HOMELESS DEATH FIGURES COULD BE ‘UNDERESTIMATED’

The deaths of 16 homeless people involving coronavirus were registered in England between March 26 and June 26 2020, the Office for National Statistics has identified.

The statistics body said the figure in its data may be an underestimate of the true number of homeless people who have died with the virus.

It defined people as homeless who were sleeping rough, using homeless shelters and direct access hostels, or housed in emergency accommodation due to the pandemic at or around the time of death.

The 16 death certificates, mainly for homeless men, mentioned Covid-19 either as an underlying cause or a contributory factor.

The release of the new James Bond film No Time to Die has been pushed back due to covid.

One problem is cases of the virus climbing in the US, as many fans of Bond, played by Daniel Craig, are over 40 and so more vulnerable.

An LA source said: “There are very secret discussions moving forward about what to do.

“Bond films are massive money spinners; people forget Daniel’s work on Skyfall and Spectre staved off potential bankruptcy for the MGM company with its profits.

“This is business. And business decisions have to be made.

“Simply put having No Time To Die earning less than half a billion at the box office would be deemed a disaster – no matter the circumstances.”

HOLIDAYMAKERS SHOULD WEAR MASKS AT ALL TIMES

Holidaymakers are being urged by the the World Travel and Tourism Council (WTTC) to wear masks at all times.

Face coverings should be on the packing list for holidays and when it’s impossible to keep a two-metre gap between sunbathers, a mask should be worn, the companies have said.

WTTC also recommends that it is mandatory to wear masks in airports, hotels, nightclubs, museums, gyms and all other indoor venues.

The new guidelines come as thousands of Brits head off on their long-awaited holidays today as part of the first day of the new air bridge scheme. 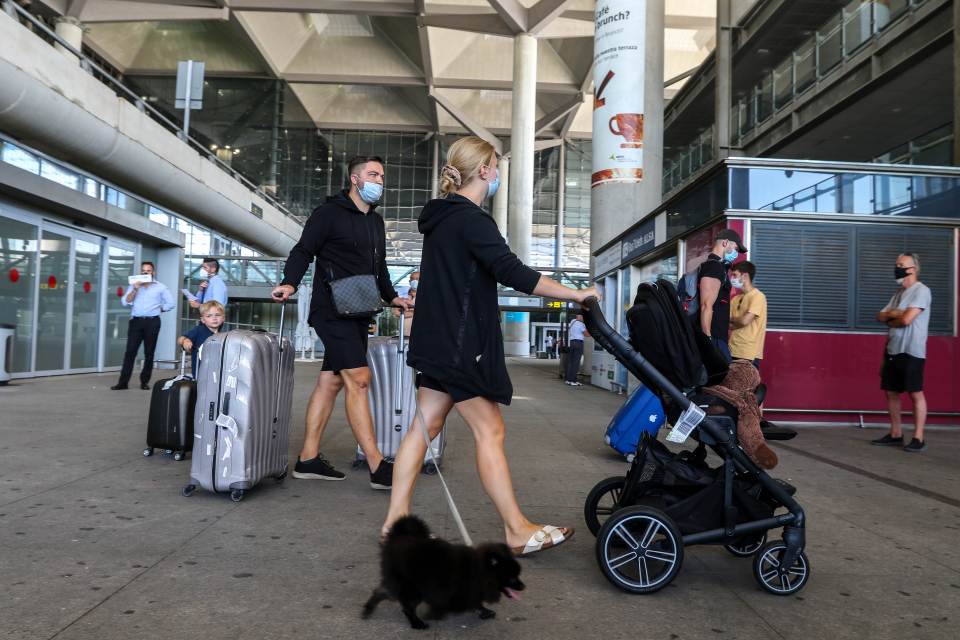 A pub owned by Lord of the Rings star Sir Ian McKellen is embroiled in a row after allegedly threatening to sack staff too scared to work due to Covid-19.

Lord of the Rings actor Sir Ian co-owns The Grapes boozer, along with businessman Evgeny Lebedev and director Sean Mathias.

The 500-year-old East End pub apparently told furloughed staff they had to return to work on Saturday July 4, when bars across Britain reopened post-lockdown.

Doctors at a major NHS trust have set up a “virtual hospital” to treat hundreds of Covid-19 patients safely from home.

Brits suffering from coronavirus have been referred to the online ward from accident and emergency, hospital consultants and GPs.

Patients have to admit their own pulse and oxygen saturation readings throughout the day, while remaining safely at home.

They have ward meetings with medics – some of whom cannot work on the frontline due to their own health – via telephone or video chat. 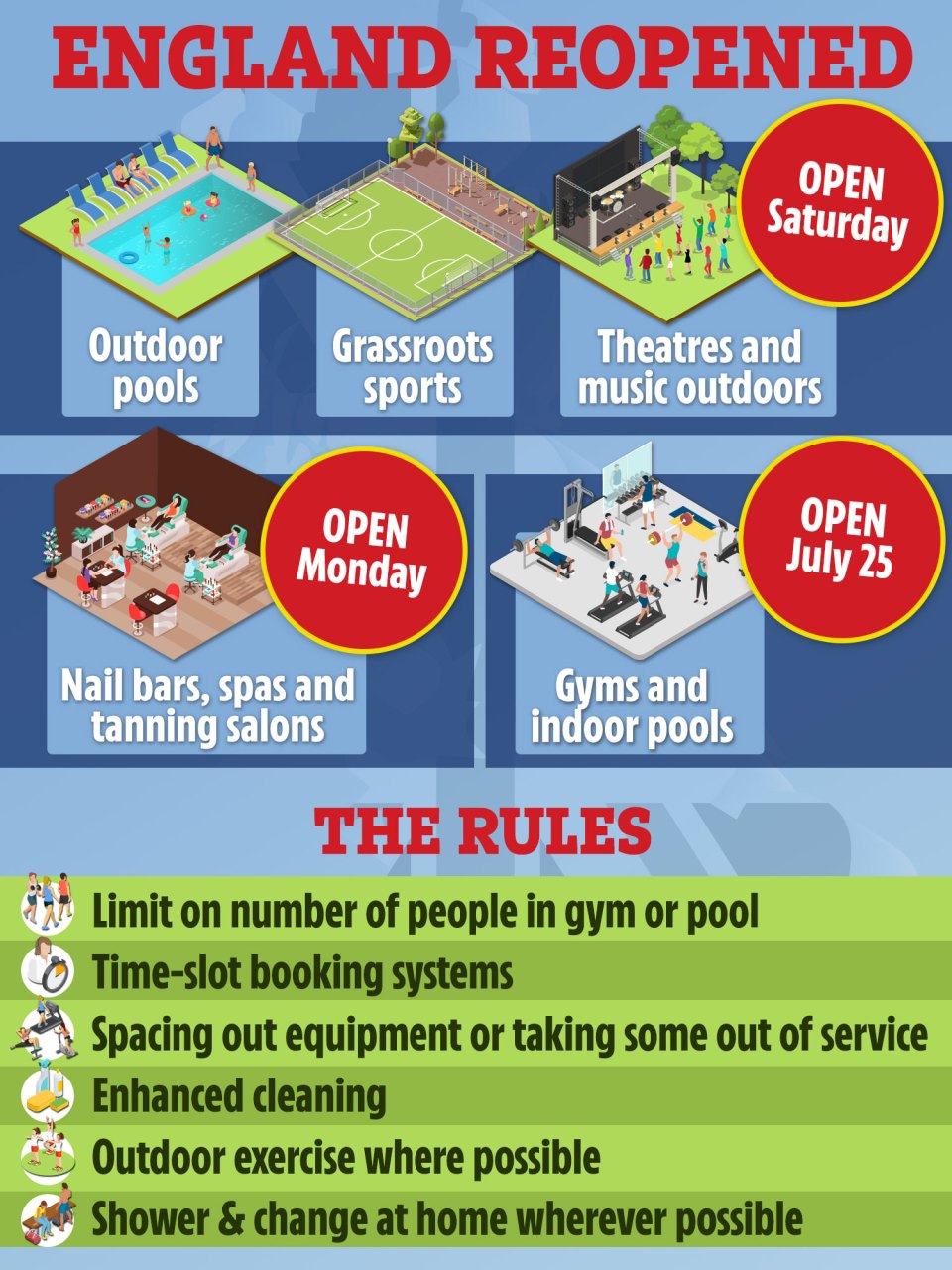