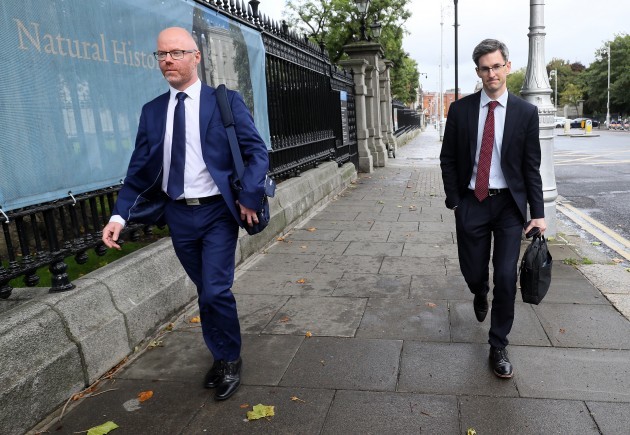 COVID-19 CASES HAVE plateaued at a high level and could increase to 2,000 per day within four weeks, the National Public Health Emergency Team (NPHET) warned the government.

The public health team issued the advice in a letter to Minister for Health, Stephen Donnelly, on Monday night, ahead of the Cabinet agreeing to loosen coronavirus restrictions on a phased basis from 12 April.

Deputy Chief Medical Officer, Dr Ronan Glynn, opens the letter by noting that the seven and 14-day incidence rate of the virus have both increased.

He added that the daily incidence is currently twice what it was in early December and it is approximately 50 times what it was in late June last year.

The analysis describes the current epidemiological situation as “precarious” and “concerning”.

“There are a number of reasons for this. First, the level of infection is high, with a five-day average case count of 620 cases per day and a 14-day cumulative incidence of 165 per 100,000,” Dr Glynn explained.

This is substantially higher than when restrictions were eased after previous waves of infection — approximately twice that experienced in early December 2020, and 50 times that in late June 2020.

Glynn adds that the disease incidence has plateaued at a high level and may now be increasing.

Chart showing the epidemiological situation when measures were eased previously.

The dominance of the more transmissible B.1.1.7 variant of the virus is listed as the second cause for concern as it means that, for similar levels of close social contact, viral transmissions and effective reproduction number will be 30%-70% greater than last year.

“This is already clearly evident in close contact testing data where the positivity rate for all close contacts has nearly doubled compared to late 2020 from just over 10% to around 20% now,” the letter states.

The third reason for concern was that the reproductive number is already estimated to be “at or above one.”

“If (the) reproduction number increases, the number of new infections per day will rise very quickly from this high baseline,” NPHET said.

“Unfortunately, the significant ‘headroom’ that was available last summer when case counts were very low isn’t available now, and any increase in transmission will have significant impacts in a short space of time,” the public health team added.

The letter also contained new modelling which outlined that the vaccination programme will “significantly and quickly” reduce the threat posed by the virus between May and August.

It notes that, based on current delivery schedules, 80% of adults in Ireland will have at least one dose of vaccine available to them by the end of June:

This gives real hope that there can be a much more widespread easing of measures during the summer months.

However, it added that vaccine coverage is still low, with just 4.2% of the population having received two doses (as of 23 March).

“It will be some time before the initial priority groups will be fully protected,” the letter noted.