It’s hoped that the 6,000-seater stadium will open in time for the start of the 2025 League of Ireland season.

Positive news today regarding the redevelopment of Dalymount Park.

DUBLIN CITY COUNCIL will soon begin work on the preliminary design for the redeveloped Dalymount Park, which will have League of Ireland clubs Bohemians and Shelbourne as its anchor tenants.

A government grant of €918,750 will allow DCC to proceed to the design and planning stages of the project for the football ground in Phibsborough on Dublin’s northside.

A grant agreement has been signed with the Department of Tourism, Culture, Arts, Gaeltacht, Sport and Media. The allocation from the Large Scale Sports Infrastructure Fund (LSSIF) will part-fund the design and planning elements of the project.

“I am delighted that work is progressing on the Dalymount Park project,” said Catherine Martin TD, Minister for Tourism, Culture, Arts, Gaeltacht, Sport and Media.

“The funding being provided by my department will allow the detailed design work to be completed and I look forward to further engagement with Dublin City Council when the project is ready to move to the construction stage.

“While it is particularly significant for the soccer community, the project will benefit the entire community and play a significant part in the regeneration of the Phibsborough area.”

The current plan is to develop a four-sided Uefa category 3 stadium that will hold 6,000 spectators. Facilities will include club offices, meeting rooms, a library and flexible community space. 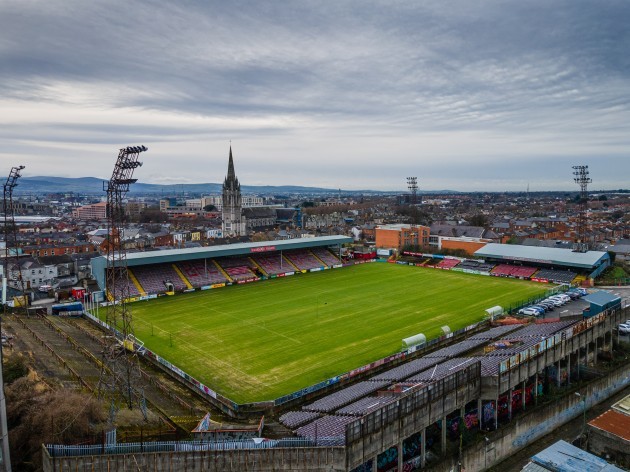 “The redevelopment of this iconic stadium will provide a modern facility that will not just be of benefit to Bohemian FC and Shelbourne FC, but the wider Dublin community through the provision of a state of the art multi-functional facility,” said Hazel Chu, Lord Mayor of Dublin.

In preparation for the redevelopment, the roof of the Des Kelly Stand will be removed within the next 12 months. The demolition of the Connaught Street Terrace will also take place.

In a statement, Dublin City Council added: “The current timeline for completion of the redeveloped stadium is the commencement of 2025 season, but this is very much dependent on further funding coming available for the construction stage from national government via stream 2 of LSSIF and the city councillors supporting the rezoning and sale of Tolka Park.”

The Football Association of Ireland welcomed the announcement of the government grant, with chief executive Jonathan Hill commenting: “Dalymount Park is an iconic Irish football stadium and this project will deliver a world-class stadium to the northside of Ireland’s capital city.

“I want to again thank government and Dublin City Council for their continued support of this project and wish all the stakeholders well with the next steps.”