A surprisingly large portion of Democrat respondents to a new survey said they were “happy” after President Donald Trump contracted the coronavirus, a trend reflected in a flurry of celebratory social media posts from his critics. 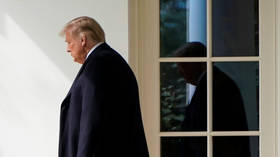 Four out of ten Democrats said they were “very” or “somewhat” happy when asked how they felt about the diagnosis, in a Morning Consult poll published on Friday, while 31 percent admitted they were “excited.” Some 41 percent reported feeling “indifferent.”

According to a Morning Consult poll, 40% of Democrats polled are “happy” President Trump got the China Virus. pic.twitter.com/bPAwMM47Sq

The survey comes a day after Trump announced that he and the first lady had contracted the illness, which has infected more than 7.3 million Americans and killed in excess of 208,000.

In stark contrast to Democrats, a majority of GOP voters surveyed for the poll said they were “sad” (55 percent) or “worried” (51 percent) after the diagnosis, while only 14 percent reported feeling “happy.”

A supermajority of Democrats (84 percent) said they “don’t trust” the president to be honest about his health as he fights the virus, compared to a similar proportion of Republicans who say they do trust him (80 percent).

The number of Democrats elated by the president’s positive test result was mirrored by a wave of jubilant tweets from his opponents, many directly wishing him harm.

In a now-deleted post, a former White House staffer under president Barack Obama and a spokeswoman for the 2016 Hillary Clinton campaign, Zara Rahim, stated plainly: “I hope he dies.”

Another verified user, Danielle Muscato – a self-declared “civil rights activist” and a contributor to a slew of corporate media outlets – also relished the news.

I’m not one to laugh at other people’s suffering, but….HAHAHAHAHAHAHABurn in hell you mother fucker#COVID19#TrumpHasCovid#coronavirus#TrumpIsARacist#TrumpLiedPeopleDied#[email protected]

If you think I’m going to regret saying I hope Trump dies from the #TrumpVirus, just wait until after he dies.

Others scaled back the vitriol a few notches and withheld their death wishes, instead hoping that Trump merely “gets sick” to teach him a lesson about the dangers of the virus.

While I don’t want Donald Trump to die from COVID-19, I hope that he gets sick enough to finally appreciate the seriousness of this virus. He has been so smug, so flippant about wearing a mask and keeping distant.

Look. Not saying I hope he dies. BUT I hope COVID knocks Trump tf down like it did to me. Otherwise, you know he’s gunna brag about how stupid/insignificant the virus is. It doesn’t affect everyone that way, but some of us have had symptoms for months. Just hope he’s one of them.

Some of Trump’s most vocal detractors, including MSNBC host Rachel Maddow, took a more sympathetic approach and wished the president and first lady a speedy recovery. Those displays of decency were also met with fierce opposition, earning Maddow the label of “fascist” in some quarters.

Rachel Maddow is a fascist.If you ask your god to bless a fascist president, you’re going into the fascist bucket. https://t.co/6qQAmUnWUe

There was an article in the NYT just this week calling Trump the leading cause of Coronavirus misinformation. Respectfully I think the decent & proper thing to hope for is that the virus hurts him enough to take it seriously, or that he dies and is replaced with someone who will. https://t.co/tpRA6CfqyH

People openly tweeting in hopes of Trump’s demise may actually find themselves banned by the platform, as this runs afoul of its rules against abusive behavior.

“Content that wishes, hopes or expresses a desire for death, serious bodily harm or fatal disease against an individual is against our rules,” Twitter said in a statement, quoted by Motherboard on Friday evening.

Twitter says that it will suspend people who openly hope for Trump’s death on the platform. https://t.co/1KcO7sJ0Z5