A Danish farm is culling 11,000 mink after detecting a Covid-19 outbreak. The animals are thought to have caught the virus from their human handlers. 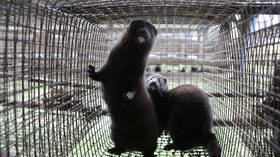 The mink, who live on a farm, are being culled to “minimize the risk of potential spread of the disease,” the Danish Veterinary and Food Administration said in a statement.

Denmark is the world’s biggest producer of mink skins, but this is the first outbreak among the country’s mink population. Over 570,000 of the animals were recently ordered to be culled in the Netherlands, after the virus was detected at 13 different farms there.

The coronavirus outbreak at the Danish farm was discovered after a person associated with the farm tested positive, which led to the animals being tested.

Covid-19 can pass between humans and animals, and vice versa, but animal to human transmission doesn’t appear to be as common. The Dutch government identified two cases of humans being infected by minks with the novel coronavirus in May, which is the only known animal-to-human transmission recorded since the beginning of the outbreak.