The army of contact tracers hired by New York City to conduct the ‘test and trace’ campaign to weed out coronavirus infection vectors will reportedly not be allowed to ask people if they attended Black Lives Matter protests. 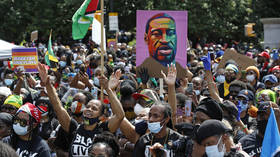 Mayor Bill de Blasio announced on May 8 that NYC would be hiring hundreds of Covid-19 contact tracers to help bring the coronavirus, which wreaked havoc on the densely-populated city’s population, to heel. The city has witnessed 210,000 cases resulting in at least 17,193 deaths from the infection.

However, before May came to an end, George Floyd was killed by Minneapolis police, sparking a wave of outrage and widespread protest across the US and beyond.

In the aftermath, which has seen major protests marred by rioting and looting as well as outbreaks of violence between citizens and the police in New York City, authorities have opted not to ask people who test positive for Covid-19 whether they recently attended Black Lives Matter protests.

“No person will be asked proactively if they attended a protest,” Avery Cohen, a spokesperson for the de Blasio administration said. Instead, participants will be asked to “recall ‘contacts’ and individuals they may have exposed,” or people with whom they have had close contact of within six feet for at least 10 minutes.

“If a person wants to proactively offer that information [about attending protests], there is an opportunity for them to do so,” Cohen added. The move has drawn harsh criticism from some quarters, with many on social media complaining that it completely undermines the point of contact tracing.

This is purely political nonsense now. What’s the point of contact tracing if you don’t disclose where you’ve been? You had one job! https://t.co/u7FPpZpTuF

In the interim, de Blasio promised to release figures at some point on Monday regarding the numbers of people questioned so far.

“That’s the one variable in this equation that we’re not sure of: We don’t know what the effect of those protests are,” New York State Governor Andrew Cuomo said when asked about the potential for the BLM protests to trigger another wave of coronavirus infection.

The three-day average percentage of positive tests from New Yorkers has dropped from 69 percent on March 31 to roughly two percent as of June 8, however the data is skewed by the fact that the testing pool has been greatly expanded, and now includes asymptomatic people.

City and state authorities are treading carefully, advising people who attended the protests to get tested but avoiding any attempts to dissuade or criticize them for fear of provoking condemnation or even violence. The mayor’s own daughter was also arrested during a Manhattan protest.

Previously, Chair of New York City Council Health Committee Mark D Levine said that, were there to be another spike of coronavirus in the city, which is among the hardest-hit in the country, racism would be to blame, not people disregarding social distancing norms.