Six former eBay employees and executives have been charged with stalking after they hounded a couple who criticized the e-commerce giant in a newsletter. The group mailed threats to the pair, and sent them live cockroaches. 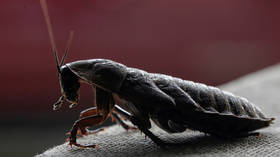 The victims, a Massachusetts couple, published an online newsletter “critical of eBay and other e-commerce companies,” US Attorney Andrew Lelling explained at a press conference on Monday.

Their missive put them on the radar of eBay’s Global Intelligence Center, and a harassment campaign began, Lelling continued.

eBay, despite its great usefulness, has never felt lovable and humane to me. But this is ridiculous. https://t.co/xSGm1HcHQn

The campaign’s alleged ringleaders were the company’s director of safety and security, its director of global resiliency, three members of its Global Intelligence Center, and its former manager of special operations.

Why exactly an e-commerce firm has a “manager of special operations,” was left unexplained, but Lelling said the team set out to “destroy the lives” of the Massachusetts couple. They sent anonymous messages and traveled to Massachusetts to conduct “covert surveillance” on the writers.

Then the deliveries started. The couple received a bloody pig mask, a bereavement wreath, boxes of live cockroaches, fly larvae and spiders and a pig fetus, which Lelling said wasn’t delivered due to an inquiry from the supplier. The suspects also allegedly mailed pornography to the couple’s neighbors, in the pair’s name.

The eBay team went as far as posting a classified ad on Craigslist, urging “singles, couples and swingers” to knock on their door to party, “anytime day or night.”

“It was a determined, systematic effort of senior employees of a major company to destroy the lives of a couple in Natick, all because they published content company executives didn’t like,” said Lelling.

All of the employees involved were fired after federal authorities tipped off eBay last year. However, Lelling’s investigation is still open, and is focusing on whether executives further “up the chain” were involved. Two unnamed executives were also included in Lelling’s complaint.

All six employees named on Monday have been charged with conspiracy to commit cyberstalking and conspiracy to tamper with an investigation. The charges each carry a sentence of up to five years in prison, or a $250,000 fine.