SpaceX and Tesla CEO Elon Musk disavowed his older socialist beliefs and went full Communism-hater on Twitter, after denouncing the satirical outlet The Onion over an ‘eat the rich’ joke. 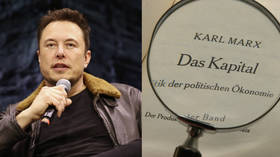 Just two years ago, Musk had described himself as “actually a socialist” and advocated for the “greatest good for all.” On Monday, however, he tweeted describing the founder of Communism Karl Marx as a “Hungry Santa” and his seminal work Das Kapital as “Gib me dat for free.”

Das Kapital in a nutshell pic.twitter.com/mG44mMkitx

What had the fifth-richest person in the world so triggered seems to have been a tweet from The Onion, showing him alongside Amazon’s Jeff Bezos, JPMorgan Chase’s Jamie Dimon and Palantir’s Alex Karp, as cover for a story titled ‘Nation’s CEOs Sign Pledge To Continue F***ing Over Americans.’

Not long thereafter, Musk unfollowed the satirical publication on Twitter and said the Onion was “now a rose” – referring to the flower emoji currently used by socialists in the US and elsewhere. The left is “losing the middle,” he said in another tweet.

The disavowal of Marx did not sit well with Musk’s online critics. Some accused him of overreacting and being “salty” over the Onion story that didn’t even mention him by name. Others threw in his face a May 2015 LA Times article, claiming that Musk’s business empire was founded on an estimated $4.9 bn in government subsidies.

[email protected] this you? pic.twitter.com/tkKakD5F2d

One critic even posted a meme calling Musk a “space Karen.”

Whatever you say Space Karen pic.twitter.com/7x6nH3xkPP

The socialist showdown has actually been brewing for days. Over the weekend, Musk was flamed for tweeting “we will coup whoever we want!” in response to accusations that the overthrow of Bolivia’s leftist government was all about getting his hands on their lithium – a mineral crucial for Tesla’s car batteries, among other things.

President Evo Morales was exiled last year by an opposition junta based on accusations – by the US and its OAS allies – of election improprieties they later admitted to be false.