Washington and Taliban militants have reportedly agreed on a seven-day “violence reduction” in Afghanistan. If upheld, it could open doors for another deal that would see US troops withdraw after 19 years of conflict. 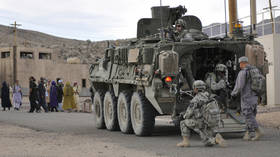 The news came as US Secretary of State Mike Pompeo and Pentagon chief Mark Esper met Afghan president Ashraf Ghani on the sidelines of the Munich Security Conference to discuss the situation in the war-torn country. Both earlier hinted at some developments in negotiations with the Taliban, which Pompeo described as a “pretty important breakthrough.”

US President Donald Trump said on Thursday that an agreement was “very close.” Unnamed US State Department officials confirmed to various media outlets on Friday that a “violence reduction” accord has indeed been reached.

The deal apparently stops short of calling a full-fledged truce, focusing only on some particular activities instead. Yet it is also described as a “very specific” and is said to involve all sides, including the Afghan army, not just the US and the Taliban. It also reportedly covers roadside bombs, suicide attacks and rocket launches. The US military will be monitoring the situation to verify if the deal is upheld.

Should the “violence reduction” deal be maintained for a week, Washington and the Taliban would move on to a more comprehensive agreement, which would involve at least the start of a significant US troop withdrawal. In exchange, the Taliban would take part in the peace process together with other forces, including the government in Kabul, which they previously repeatedly dismissed as a “puppet” of the West.

Another condition of the future agreement would demand that the Taliban do not allow Afghanistan to turn into a safe haven for terrorist groups. None of the details have been officially announced yet, with various media outlets suggesting the announcement could come as early as next week.

NATO Secretary General Jens Stoltenberg said in Munich on Friday that the alliance is “ready to adjust” the number of its troops deployed to Afghanistan “if Taliban is able to demonstrate real will and real ability to reduce violence, and we see a path to peace.” He also said that NATO currently has 16,000 soldiers in the country.

The war in Afghanistan has dragged on for more than 19 years, making it the longest active conflict in US history. Even though Washington poured a whopping $1 trillion into the war effort, the US military still struggled to make progress while large portions of Afghan territory remained contested or fully in the hands of the militants.

Talks between Washington and the Taliban in Doha, Qatar had been going on for more than a year, but have proven quite fragile and plagued with uncertainty. In September 2019, Trump’s special envoy to Afghanistan announced that a peace deal had been reached pending the president’s final approval, only for Trump to walk away from the deal and cancel the talks after an American soldier died in a Taliban attack. The negotiations resumed in December, even as another American was killed.

The situation in Afghanistan remains tense. The latest news about a potential breakthrough come amid reports that eight people were killed in an airstrike in the eastern province of Nangarhar, a day after a senior Taliban commander and eight militants were killed in another air strike, according to the Afghan Defense Ministry.