Tadhg Beirne helped scupper Munster’s last attempt to win a final, but he is a key man in a Munster side that have come a long way since.

MUNSTER HEAD COACH Johann van Graan didn’t have to add much in the way of hype for tomorrow’s Pro14 final against Leinster (kick-off 5pm, eir Sport). But when he did underline the game’s importance he noted that it was Munster’s first final in four years.

Not many in the southern province carry fond memories of that day, an Aviva Stadium thrashing at the hands of a rampant Scarlets.

Out-halves Tyler Bleyendaal and Ian Keatley are among eight of the matchday squad to  have moved on since, not to mention the head coach of the day Rassie Erasmus.

Among their tormentors in the 22-46 defeat – a scoreline that was even more lob-sided with six minutes to go than it was at full-time – was a man who will be key if they are to succeed in their return to the Pro14 decider.

Tadhg Beirne is in a different shade of red four years later, but he has a familiar scent in his nostrils, a sense that his side is being written off. 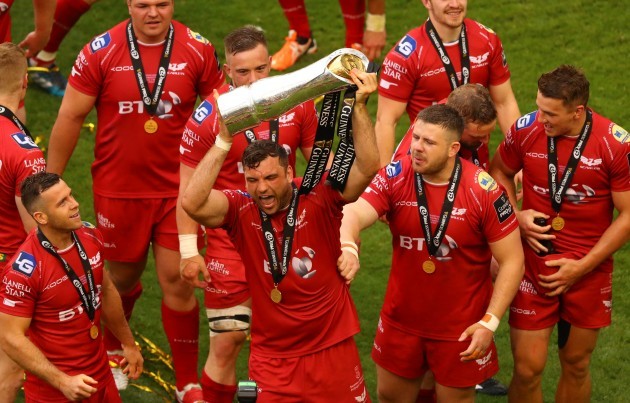 “If I think back, I think the Irish media had written off Scarlets pretty early,” Beirne said after being whisked from training to a press conference this week, “so I think we probably went in with an extra… I dunno, probably a lot of people were not expecting us to win that game back here.

“I’m not too sure where all your heads are at,” he says nodding at a screen full of rugby correspondents, “a lot of you could already be writing us off because everyone has Leinster on that pedestal.

“We are quietly confident in here. We were backing ourselves and we feel like we will be able to get the win on Saturday.”

Beirne has every right to be confident at whatever volume he likes. Even as Ireland lacked consistency as they moved into the second year under a new coach, Beirne was consistently excellent during the Six Nations. He chalks the rich vein down to simply having the chance to settle into a regular rhythm of playing.

“I feel that kind of form has been there for me,” says Beirne.

“When you are playing for Ireland it is going to be noticed a lot more, a lot more people are watching those games. To get a run of five games on the bounce was a massive opportunity for me and I only went out and tried to do what I had been doing for Munster.”

Now it is time for Beirne to bring the same red-hot form back to Munster when they need it most, there certainly isn’t much time for it to cool off.

Coaches routinely bemoan a six-day gap between matches as ‘a short turnaround’, but the incredible scenario that Covid-era rugby scheduling has brought us now is a final seven days after the Six Nations closing day. 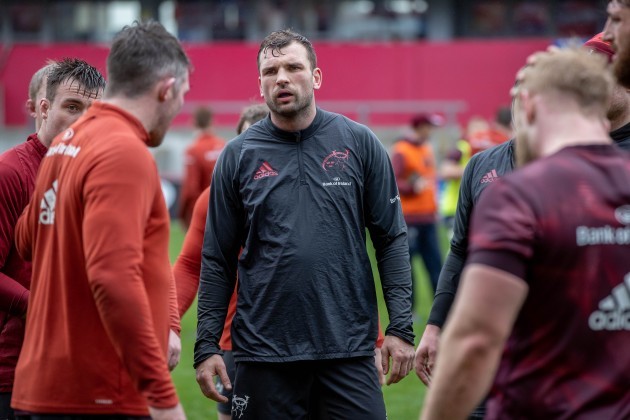 Beirne at training in Thomond Park this week.

Seven days to change from one team to another, changing coaches, styles and turn team-mates to the most fierce of rivals. Once he gets his head around the system, Beirne has no concern that the nature of competition will allow the rest to fall into place.

“Both sides are going to be in the same boat. That is probably the most challenging thing is to get onto the same page, to where Munster have been working towards. We have been out of that environment for eight weeks now, so that is the biggest difficulty.

“In terms of flicking a switch on the day of a final, it is a final at the end of the day.

That 10-year wait since last winning a trophy speaks volumes about Munster’s motivation this week. There is little more needed to be said for a team that has so consistently challenged for honours even when they seemed to be punching well above their weight to do so.

Under Van Graan, Steven Larkham and Graham Rowntree, this Munster side are better prepared than most previous iterations. And although Conor Murray and Keith Earls are the sole survivors of the 2011 Celtic League win (also against Leinster, for what it’s worth), those without a professional medal to their name will look to those who have touched winning ribbons after a final to make a difference.

And talents like Beirne, Joey Carbery and Damien De Allende are well capable of being game-changers.

“Some lads have played in a lot of semi-finals and finals and haven’t won anything and then there are a lot of young lads who broke through in the last year or two who haven’t been involved in any of that.

“It is a fresh game for them, so look, there are all different kinds of motivations there for different people, but everyone knows you don’t get too many opportunities to play in a final. Everyone is going in with the same goal and everyone is going to be going all guns blazing for the big one on Saturday.”

Somewhere in that array of varied motivations must surely be an intent from Beirne to prove more than the media projections wrong. He will walk out at the RDS for tomorrow’s final as a key man in Munster’s weaponry five and a half years after he made his professional debut at the venue for Leinster.

A lot of water has passed under the bridge, a lot of possession has flown through Beirne’s hands since then. Beirne is not the kind of person who feels they must wait until the dust has settled on Sunday morning to consider how far he has come since being released by his native province.

He has made it via the road less travelled by living moment to moment and proving his talent over and over again.

“I suppose when you do sit down and think about it, it has been a hell of a journey.

“I’m certainly enjoying it. There has obviously been a lot of ups and downs you know. This time last year I was trying to get back from an injury and if you told me I would be in this position a year ago I certainly wouldn’t have thought it.

“You have got to appreciate these moments as well and that’s something I’m certainly doing and am trying to enjoy my rugby a lot more as well at the moment.”

Murray Kinsella, Bernard Jackman and Gavan Casey field listeners’ questions about Ireland’s victory over England before turning their attention to the club game, and Super Rugby in the Pacific Islands, prospective law trials up north and, of course, this weekend’s Pro14 final between old rivals.