The National Immunisation Advisory Committee is to decide if further advice needs to be issued about the AstraZeneca vaccine.

A EUROPEAN MEDICINES Agency (EMA) recommendation yesterday that a specific type of blood clot should be listed as a “very rare side effect” of the AstraZeneca jab stopped just short of saying there is a causal link between the vaccine and the condition.

Questions have been raised over the last number of weeks on whether these highly unusual blood clots among those getting the AstraZeneca vaccine against Covid-19 were more frequent than in the general population, and what causes them if they were.

Questions have also been raised about what the course of action should be if a link is proven.

Following the EMA’s recommendation, the National Immunisation Advisory Committee (NIAC) said that its current advice remains that those receiving the AstraZeneca jab should be informed that very rare, complicated clotting events have been reported in a small number of people who have recently received the vaccine.

The NIAC is due to decide in the coming days whether any further advice is required.

Other countries have taken different tacks: the UK medicines regulator recommended halting the rollout of the AstraZeneca vaccine to people aged under-30. However, it is still uncertain whether Ireland will deviate from current advice, in part because AstraZeneca makes up about 20% of the 3.9 million vaccines doses expected in Ireland by 30 June.

Here’s what we know so far:

What has been observed so far?

As of 4 April, national health authorities have reported 222 cases of a rare thrombosis affecting the brain or abdomen among some 34 million people in Europe who have received the AstraZeneca jab, according to the EMA.

In Germany, for example, the medicines regulator, the Paul Ehrlich Institute (PEI),  flagged what they described as an abnormally high number of cases involving these rare cerebral blood clots, mostly in younger and middle-aged women, in mid-March.

The condition involves “both thrombosis and haemorrhaging”, Odile Launay, a member of the scientific body advising the French government on Covid-19 vaccines, told AFP. “This thrombosis of large veins is unusually located in the brain, and even more rarely in the digestive tract,” the French Medicines Agency (ANSM) noted.

It is also associated with a condition characterised by abnormally low levels of platelets, which are small cell fragments in our blood that form clots to stop or prevent bleeding.

As of 22 March, by which time 86 such cases had been logged in the European Economic Area, 18 had resulted in death. Most of the cases were in women under 60. This is the most up to date figure available for the EEC, however, the UK said yesterday that it had linked 79 such cases and 19 deaths among people who had received one of 20 million AstraZeneca doses administered there.

In Ireland, the Health Products Regulatory Authority (HPRA) said there have been 18 reports of events possibly relating to blood clots following an AstraZeneca vaccine dose.

However, while concerning, it is important to note that none of these are of the nature of the very rare blood clots the EMA is investigating.

The HPRA said an additional small number of cases describing low platelet counts have been received and follow-up is ongoing to rule out the presence of blood clots.

The authority has so far been notified of around 2,800 self-reported suspected side effects associated with the AstraZeneca vaccine, which is to be expected. The most common side effects of reporter are dizziness, headache, muscle pain, nausea, tiredness, fever, and chills. There have been more than 204,000 doses of this vaccine administered so far in Ireland.

The HPRA said there had been 22 similar reports of blood clotting received for mRNA vaccines (Pfizer and Moderna). None of the reports notified to the HPRA describe the very specific type of blood disorder described above i.e. clotting in combination with a low level of platelets or bleeding. These figures were included in its most recent report on suspected side effects from Covid-19 vaccines published on 25 March.

Link with the vaccine?

Understandably, the EMA has been reluctant to draw a straight cause-and-effect line between the vaccine and the rare blood clots. Last week the agency said the link “has not been proven but is possible,” and headlined yesterday’s finding the same way.

Other specialists are more categorical, with a number of European countries stalling their vaccination programmes because of concerns over the AstraZeneca jab.

“We have to stop speculating on whether there is a link or not — all the cases showed these symptoms three to 10 days after inoculation with the AstraZeneca vaccine,” Pal Andre Holme, who heads a team at Oslo National Hospital working on these cases, told Norwegian television.

“We have not found any other triggering factor.”

Norway’s national medicines agency backed this assessment, with one of their executives, Steinar Madsen, saying “there is probably a link with the vaccine”.

“The EMAs position on this is that this continues to still be considered a very safe and very effective vaccine,” Dr Nolan told RTÉ Radio’s Today with Claire Byrne this morning.

“When we talk about risks, it’s very easy to lose sight of the overwhelming benefits of vaccination, and that is what we have to keep in mind here.”

She said it is possible that real-world use may show up very rare side effects that are not possible to see within a clinical trial setting, but that she hopes the public is reassured by the “open and transparent” process that is ongoing. 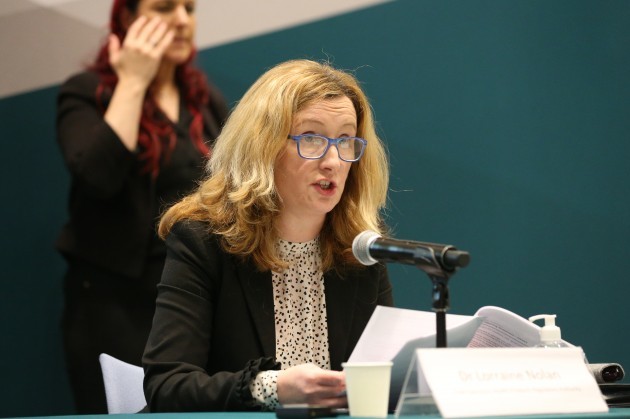 What are the risks?

Based on the most recent data, someone getting the AstraZeneca vaccine stands a 1-in-153,000 chance of cerebral venous sinus thrombosis (CVST), the blood clot in the brain that the EMA is investigating, or its equivalent for the digestive tract, splanchnic vein thrombosis (SVT).

To put that in a different perspective: the odds of getting hit by lightning in an average lifetime – a little more than 1 in 10,000, according to the British Medical Journal – are more than 90 times higher than dying from a brain blood clot after receiving an AstraZeneca jab.

People who are on the contraceptive pill are often warned of an increased risk of blood clots in their legs as a result; however, the risk of a blood clot from taking a birth control pill is about the same as the risk of a person being struck by lightning. 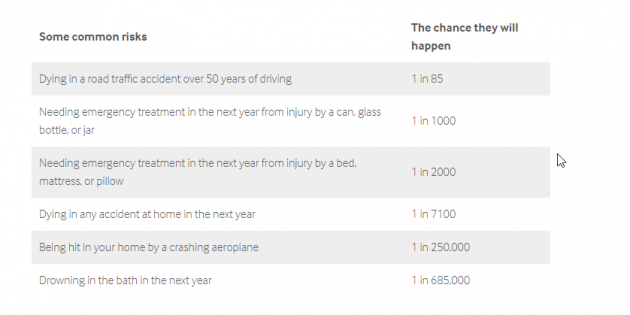 Risks of some other rare things that may happen

In Germany, there have been 31 suspected cases of CVST – 19 accompanied by a drop in blood platelets – with nine deaths, according to the Paul-Ehrlich Institute.

These cases were spread across 2.8 million AstraZeneca vaccine doses injected, or just over one case per 100,000 doses.

Britain – where AstraZeneca has been administered more than in any other country – registered 30 cases as of Saturday, including seven fatalities, across a total of 18.1 million doses.

As is true of all medications, risks must always be weighed against benefits, a view consistently echoed by the EMA.

“The reported combination of blood clots and low blood platelets is very rare, and the overall benefits of the vaccine in preventing COVID-19 outweigh the risks of side effects,” the agency said yesterday.

Consultant haematologist professor at the Mater Hospital Fionnuala Ní Ainle told Morning Ireland that people should be aware of the warning signs of clotting post-vaccine, but noted that it remains a very unlikely occurrence.

Most cases of cerebral thrombosis have occurred in those under 65, but it is impossible to draw any conclusions about age because the vaccine has been administered to date mostly among younger people.

During its initial rollout, AstraZeneca was not administered to older people because of a lack of data during clinical trials. The fact that most cases have been among women could reflect the fact that the health sector – predominantly women – was given priority for vaccination.

“Based on the currently available evidence, specific risk factors” — such as age, gender or preexisting conditions — “have not been confirmed”, the EMA said Wednesday.

A half-dozen countries temporarily paused the AstraZeneca jab in mid-March, and even more have now suspended the vaccine again.

Germany decided in late March to ban its use for anyone under 60, while in Canada – as in France – the age threshold is 55. In Sweden, the age cutoff is 65.

“We do not have just one vaccine, we have several,” Sandra Ciesek, a professor of medical virology at the Goethe University Frankfurt, wrote in Science magazine. “So, restricting the AstraZeneca vaccine to older people makes sense to me.”

Norway and Sweden have taken the more radical step of suspending the AstraZeneca vaccine altogether.

Meanwhile, the UK medicines regulator recommended halting the rollout of the AstraZeneca vaccine to people aged under-30. From now on, people aged 18 to 29 years old will be offered an alternative vaccine. Those who have already had a dose of the vaccine are advised to still take the second dose, while pregnant women and those with blood disorders are asked to consult their doctors.

The Medicines and Healthcare products Regulatory Agency (MHRA) said there were still huge benefits of the vaccine in preventing Covid-19 and serious disease but due to a very small number of blood clots in younger people, those under the age of 30 will be offered Pfizer or Moderna instead.

The MHRA concluded that the balance of risk for the vaccine is “very favourable for older people” but more finely balanced for younger groups.

HRPRA chief Lorraine Nolan said National Immunisation committees  – such as MHRA –  have to consider a range of different public health factors like the epidemiology of the disease in a particular country and immunisation rollout progress when making a decision that would affect vaccinations.

For the moment, there are only hypotheses. The one favoured by the EMA and many independent researchers is some form of an immune reaction.

“One plausible explanation for the combination of blood clots and low blood platelets is an immune response, leading to a condition similar to one seen sometimes in patients treated with heparin,” the EMA said.

In very rare cases, the anticoagulant medication heparin is known to induce a severe reaction known as heparin-induced thrombocytopenia (HIT).

In a recent study that has not yet been peer-reviewed, German and Austrian researchers reached the same conclusion, proposing a name for what they described as a new syndrome: “vaccine-induced prothrombotic immune thrombocytopenia (VIPIT).”

An association of French scientists and doctors called “On the Side of Science” have suggested that such an immune response could come from the accidental insertion of the needle into a vein in the upper arm, rather than muscle.

Whatever the explanation, health officials say the benefits of the AstraZeneca vaccine in preventing Covid-19 overall outweigh the risks.

And while a lot of attention is being paid to potential side effects right now, experts say the risk of getting severe blood clots from Covid-19 is much higher than the chance of developing one after having the AstraZeneca vaccine.