Facebook “appears” to have resolved the issue after it blocked and banned users for sharing a Guardian article about the site’s algorithms removing a photograph of Aboriginal men in chains over “nudity.” 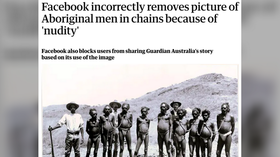 The social media giant apologized on Saturday for incorrectly blocking the 1890s photograph posted by a user in response to Australian Prime Minister Scott Morrison’s claim that there was “no slavery” in Australia. The post was restored when Guardian Australia asked if it had been automatically flagged in error.

However, Facebook then began blocking and banning users who attempted to share the Guardian’s article about the removal, citing the same breach of community standards.

On Monday, the newspaper reported that “dozens” of readers had said that when they attempted to post the link to the article detailing the incident, they received a message saying it violated site guidelines — including the user who originally posted the image.

Some of those trying to share the article were even “banned from posting” on the social media platform for up to 30 days, the Guardian said. Facebook finally “appeared” to have properly resolved the issue on Monday afternoon “after further inquiries” from the newspaper.

Canadian journalist Cory Doctorow tweeted about the incorrect censorship, arguing that Facebook CEO Mark Zuckerberg should not be making decisions about “the social lives and political discourse” of its 2.6 billion monthly users.

“NO ONE is capable of doing that job,” he said. “That job should not exist.”

Facebook has been in the hot seat over its content policies in recent days as many people called for it to remove inflammatory posts by US President Donald Trump, including one which threatened that “when the looting starts, the shooting starts” in relation to protests and unrest sparked by the killing of George Floyd.

Zuckerberg said last week that the platform would“review” its policies for handling content which violates or partially violates its current rules.