A man who crossed into North Korea and put the city of Kaesong on high alert because he had symptoms resembling coronavirus is unlikely to have been a transmitter of the deadly contagion, Seoul’s health officials have claimed. 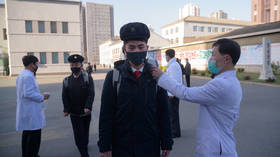 The man in question – who fled from the North three years ago – returned to his homeland on July 19. He reportedly showed up in Kaesong, his home city, and on-site medical screening returned “uncertain results,” Pyongyang’s state media reported.

Fearing that he could become North Korea’s patient zero, the authorities immediately called a meeting to address an emergency “that may lead to a deadly and destructive disaster.” Without explicitly mentioning Covid-19, Kim Jong-un himself said he placed Kaesong on total lockdown as part of a “pre-emptive measure” to contain a potential epidemic.

However, health officials just across the heavily fortified 38th parallel don’t believe the runaway could have brought the virus into North Korea.

“The person in question… was not registered as a positive [Covid-19 patient] in the web database of the Center for Disease Control,” Yoon Tae-ho, head of South Korea’s Central Accident Prevention Headquarters, was quoted as saying by Yonhap on Monday.

“Our data does not confirm that he is a suspected coronavirus patient,” Yoon reiterated. The official said that two people “who thought they had frequent contact with this person” were tested the day before, and the tests failed to reveal coronavirus.

Meanwhile, the South Korean military revealed new details of the defector’s escape. A spokesperson for the Joint Chiefs of Staff (JCS), Kim Jun-rak, told reporters that the man appears to have passed through a drain under barbed wire fences to evade border guards, which leads to the Yellow Sea.

Then he apparently swam back to North Korea, the JCS officer suggested. “We spotted the specific location from which he fled to the North on Ganghwa Island, as a bag believed to belong to the man was found,” he said.

North Korea is arguably one of the few countries that has yet to officially report any Covid-19 cases. Still, the reclusive nation sealed its borders six months ago, as the virus started swirling across the globe.

Its southern neighbor’s Covid-19 tally now stands at just over 14,000 as of Monday. The country has reported 299 deaths, according to Johns Hopkins figures.