THE GLASWEGIAN SKY was filled with 50 shades of grey, the Celtic Park stands empty of everything bar the echoes and the shadows as Johnny Sexton stood and posed. And in those precise moments, captured at a time when social distancing were words no one used, you could get a sense of where the Pro14 was heading.

This was launch day ahead of the 2018/19 season. Sexton, as captain of the defending champions, Leinster, was asked to stand up front with the trophy; the remaining 13 captains positioned behind, as if in a queue. Nearly four years on, those players, those teams, are still waiting in line.

If you want to know why, then we’ll take you to another scene from that afternoon, this one in a hotel conference room, as one by one, each coach was sent into an interview room to be interrogated by the Press.

It had been a busy morning for Leo Cullen, posing for pictures beside the trophy that his Leinster team won in May, the flash of camera lights prompting moments of self-consciousness and awkward smiles. Later, he reappeared in a corridor on the hotel’s first floor, more relaxed in this quieter spot.

Unusually for a head coach, he prefers the shadows, six years having passed since he was asked to step out of them, confessing to feeling “a little green” in that rookie year, as he figured out a way to achieve success.

By now, it’s fair to say he has discovered the formula. Since replacing Matt O’Connor as Leinster’s head coach in the summer of 2015, Cullen has won five major trophies, the latest one arriving last night at the RDS after their 16-6 win over Munster. 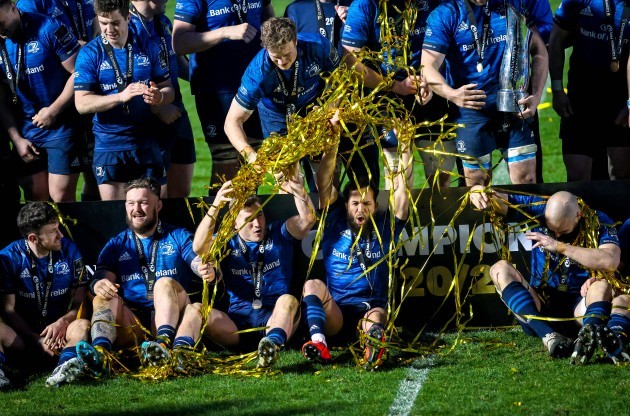 “There’s an old saying,” he said that day in Glasgow, four years ago, “that success makes you weak.” He repeated those same words again last night, referring to the motivation he, and his squad, drew from last week’s defeat to Ospreys.

Now bear in mind two things: No1, the Leinster team he selected against Ospreys was packed with kids, their first XV tucked up in their rooms at the Shelbourne Hotel, preparing for Ireland’s Six Nations clash against England the following day. And secondly, it was a dead rubber. “Even though the result didn’t matter,” said Cullen, “it still sucked that we lost.

“We all felt the pain. It was a timely reminder really. Winning can make you a little bit weak or soft.”

In case it has escaped your attention, it is worth pointing out here that it is not just a team Cullen and Stuart Lancaster are building but a legacy.

How things have changed from Cullen’s first year in charge, a season when humiliation knocked on Leinster’s door as they lost five of their six Champions Cup encounters. Ever since, brick by brick, this Leinster squad has been rebuilt.

Wherever you looked last night, there were options. In the front row alone, you had a starting Test Lion (Tadhg Furlong) replacing an Irish international (Andrew Porter) at tighthead. 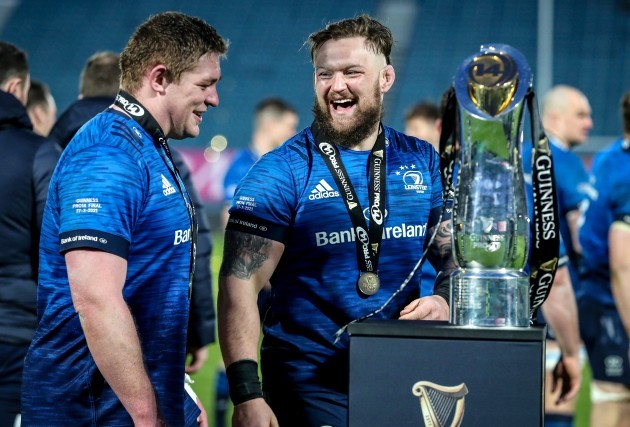 Furlong (left) replaced Porter (right) in the second half of last night’s final.

The half-backs chosen by Andy Farrell for Ireland’s wins over Italy and Scotland (Gibson-Park and Sexton) were on the bench and that’s before we mention those players who didn’t even make the match-day squad last night through either injury or bad luck: Sean Cronin, James Ryan, Dan Leavy, Will Connors, Caelan Doris, Harry Byrne, Garry Ringrose.

“One of the things we really admire about Dublin (Gaelic footballers),” Cullen once said, “is that they don’t get carried away with themselves.

“People go on about how successful Leinster were from 2009 to 2012 but we lost many big games in that period, (Magners League) finals slipping away from us the week after Heineken Cup wins in 2011 and 2012.

“Dealing with the distractions that were created by celebrations was a huge challenge for players and coaches. Every team is trying to knock you off your perch. You have to enjoy the journey of it and then, post result, start all over again. You can’t live on your reputation.”

Leinster know that. Tellingly Cullen reminded us last night how back in September, Leinster won the 2019/20 Pro14 one Saturday and then, the following weekend, lost to Saracens in the Champions Cup. You just know his players will be told this all week ahead of their date with Toulon.

“It’s important that we’re not a little bit off when we turn up here again next Friday, but it’s that balance now, isn’t it? Short turnaround, enjoy the moment for a few hours and try and turn the page into Toulon now because it’s a massive challenge against a star-studded squad of players that we’ll be facing.” 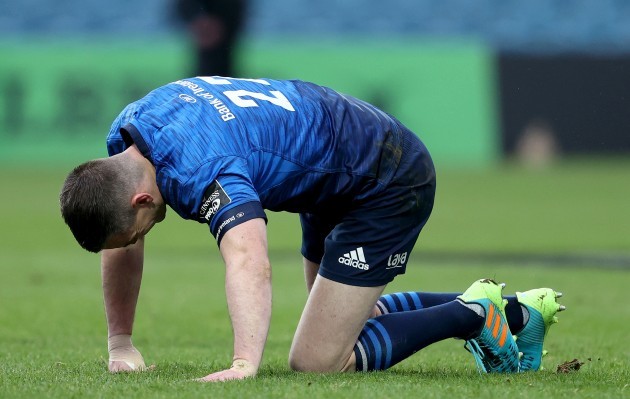 Sexton goes down with an injury.

“He got a whack in the nose and he’ll go through his HIA inside and he’ll still follow his graduated return to play protocols and we’ll see how he comes through that.”

There’s something else to keep an eye on. Traditionally, Leinster allow departing heroes lift their trophies at the official ceremony – think Sean O’Brien in 2019, Rob Kearney and Fergus McFadden last year, so is there something we need to know about Devin Toner, Scott Fardy and Michael Bent appearing first on stage after last night’s game?

“Well Dev has just broken the record for most capped Leinster player – it’s just a brilliant moment for him, isn’t it? He’s such a great character Dev and Fards as well. The two of them have been just brilliant for us over the course of a season,” said Cullen.

“They are the glue of the group. Benty in what he delivers, particularly around the scrum, how he goes about his business, mentoring younger players and delivering all throughout the season when we’ve lots of players away.

“Sometimes we’re playing a game and he’s coming up with five scrum penalties on his own, which has such a big bearing on some of those games. He’s been brilliant.

“Fards, since he’s arrived, is in the thick of everything, leading on and off the field and is a great mentor for a lot of the younger players we have. It’s a very special moment seeing the three of those guys together.

“We can worry about the future in the future, but for now it was just the three of them enjoying the moment.”

Now that it is Sunday, that moment has already gone. Cullen, his coaching staff and team, have moved on. Toulon lie ahead for this team who are getting used to what it is like to be ‘weak and soft’.