Boats are being told to steer clear of the Roosevelt Bridge in Stuart, Florida, after the US Coast Guard (USCG) warned it could collapse at any moment. Concerned locals posted photos of a crack at the south end of the structure. 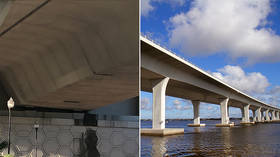 The USCG and the state’s department of transport are among the agencies working to secure the safe closure of the bridge while maintenance is carried out on the affected area.

The Coast Guard radioed out a message warning of the “risk of imminent collapse” and advising maritime traffic to stay clear “until further notice.” However, according to local reporters, it appears that some boats can still pass under the Roosevelt Bridge one at a time. The bridge spans the St. Lucie River and is an important route for both land vehicles and maritime traffic within the state.

PERSPECTIVE FROM THE WATER: looks like boats can cross under the Old Roosevelt Bridge. Via radio, @USCGSoutheast told us they’re advising boats stay away, but one boat can cross the New Roosevelt bridge at a time @CBS12pic.twitter.com/1sVN63cP89

Traffic across the bridge itself has been heavily impacted, with southbound lanes closed and police redirecting traffic.

🚨🚨Southbound lanes of the Roosevelt Bridge are closed until further notice. Old Dixie Hwy is also closed. Traffic is moved to 1- lane on the northbound lane for both North/Southbound traffic. Avoid the area- use alternate routes. #TrafficAlertpic.twitter.com/8cwxh1oL30

Some concrete fell from the bridge overnight, according to local authorities, leaving a distinct pockmark in the structure’s facade. Photos taken by concerned Floridians and local news outlets show an alarming crack emanating from the gap.

NEW: Here’s a look at the crack on the Roosevelt Bridge in Stuart. The southbound lanes remain closed.https://t.co/16K0fDygzlpic.twitter.com/v1Wqcunj54

Posters on social media pointed out that Florida commuters were lucky that some masonry fell to signal the danger, as bridges can collapse without warning, to devastating effect.

In 2018, six people were killed when a pedestrian bridge in Miami collapsed, and, in August 2007, a bridge in Minnesota came down, killing 13 and injuring 145. Investigators later said the likely cause of the accident was the use of support plates that were about half as thick as they should have been.

The latest annual review of the country’s bridges, carried out by the American Road & Transportation Builders Association and released in April, found that more than 46,100 bridges in the US were “structurally deficient.”

“At the current rate, it would take 50 years to fix all of the nation’s structurally deficient bridges,” the report said.