Most deaths attributed to the pandemic in Palm Beach County had serious health issues beyond the virus, and some were totally unrelated to Covid-19, an investigation has revealed. It’s not the first anomaly to surface in Florida. 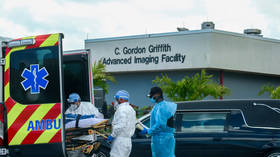 Gunshot wounds, hip fractures, and Alzheimer’s deaths have all been counted as Covid-19 casualties in Palm Beach County, according to an investigation published Thursday by local CBS affiliate WPEC. Of a spreadsheet of 581 “Covid-19 deaths” analyzed by the team, only 169 could be attributed to the virus without other contributing factors – and eight had nothing to do with the virus at all.

In addition to the 60-year-old gunshot victim and the 90-year-old man who died from complications of a hip fracture, they included a 77-year-old Parkinson’s victim, several Alzheimer’s sufferers, and a neck fracture. The Palm Beach County Medical Examiner’s office told the outlet the non-Covid deaths had been included by mistake and would be removed, adding that the Department of Health “should have” caught the mistakes before adding them to Florida totals.

Governor Ron DeSantis recently called for Florida to review its case-counting methods after a man who died in a motorcycle crash in Orange County was tagged as a Covid-19 death last week. Rather than attempt to write it off as an error like his Palm Beach counterparts, Orange County Health Officer Dr. Raul Pino explained one “could actually argue that it could have been the Covid-19 that caused him to crash”  – though health officials later confirmed the death had in fact been removed from the state’s pandemic totals.

DeSantis also announced earlier this week that the Department of Health would look into why individuals who’d never even been tested for Covid-19 were being told they’d tested positive. According to local media, these are likely people who arrive at testing centers, fill out the required forms, and leave before actually getting swabbed because of long lines.

The Palm Beach report was far from the first to expose Florida’s creative Covid-19 accounting. Earlier this month, it emerged that positive test results from dozens of testing centers had been double-counted, with some labs included twice on the state Board of Health’s daily coronavirus summaries as if the positive test results had come from a second test center . An investigation by Orlando Fox affiliate WOFL found several of the labs reporting abnormally high rates of positive tests were in fact supplying incorrect numbers, retesting a batch of 522 specimens that were initially entered as 98 percent positive only to find that just 9.4 percent were actually positive.

Other labs have been accused of “dumping” large numbers of test results days or even weeks after the tests are performed, creating the impression of a case surge (and accompanying panic) where none exists. Just The News found these statistical anomalies could be responsible for inflating case counts by as much as 30 percent for June, a period the state reported several “record” high cases.

Even absent mysterious errors, the “correct” recording of coronavirus deaths is controversial, particularly the Centers for Disease Control’s directive urging doctors to report “probable” or “presumed” Covid-19 diagnoses on death certificates without testing.

Florida is currently one of the fastest growing pandemic hotspots, and state government is locked in a battle with public school teachers over whether schools should be required to open in the fall. The case spike has also caused President Donald Trump to abandon the idea of holding part of the Republican National Convention in Florida.