‘I happened to be the fella who was in the right place at the right time.’

AT THE TIME, people described them as moments he’d tell his grandchildren about.

When they’re old enough to understand the significance, Des Kennedy intends to do just that.

Being a relative of a man revered as sporting royalty in Limerick has already demonstrated its value to his niece.

Kennedy chuckles along as he delivers the anecdote.

“She was asked to pick a subject to write an essay on when she was in school, so she went away and wrote the essay and brought it in. When the teacher asked her what subject she picked, she said she wrote about her Uncle Des.

“The teacher read it and he couldn’t believe it. He said: ‘Dessie Kennedy who scored against Real Madrid! He’s your uncle? I used to go and watch him playing when I was a young fella!’

“That’s the kind of thing that really makes it special.” 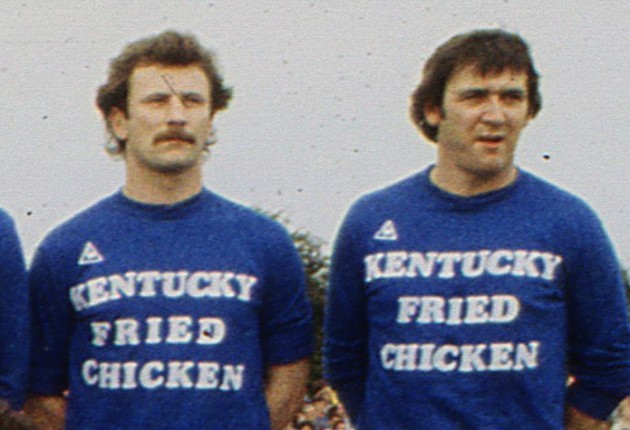 When Kennedy sits down on Tuesday night to watch Real Madrid hosting Liverpool in the first leg of their Champions League quarter-final, it’s likely to evoke fond memories. The game takes place 40 years since the two footballing behemoths first met.

Prior to Alan Kennedy’s (no relation) decisive strike for Liverpool in the 1981 final, Real Madrid had conceded just three times over the entire course of that European Cup campaign. One of those goals came from Graziano Bini of Inter Milan in the semi-final. The other two were scored by Limerick United’s Des Kennedy.

The early 1980s was a golden period for football in Limerick, with League of Ireland and FAI Cup silverware brought to the city during Eoin Hand’s four-year tenure as manager.

Having been crowned champions of Ireland for just the second time in their history, the European Cup first-round draw that was made in Zurich in July 1980 paired Hand’s side with a club that had just won its 20th – and third consecutive – Spanish title. Real Madrid’s roll of honour also included six European Cups.

They boasted a squad that featured five players who went on to represent Spain at the next World Cup – future Real and national team manager Jose Antonio Camacho among them. Also in their ranks were Uli Stielike, who won the Euros with West Germany a few months before playing against Limerick United, and England star Laurie Cunningham.

The size of the task facing Limerick was illustrated to them in Real Madrid’s final game before departing for Ireland. A 7-1 thrashing of Athletic Bilbao in La Liga set Vujadin Boskov’s team up nicely for the start of another European Cup bid.

To the dismay of the Limerick public, the home leg was switched to Dublin amid concerns over the suitability of the Markets Field to host such illustrious opposition.

The increased capacity provided by Lansdowne Road had Limerick United chiefs forecasting a financial windfall, but with many supporters refusing to travel in protest at the decision to take the game to the capital, a disappointingly small number were in the stadium to witness the goal that put Limerick ahead early in the second half. 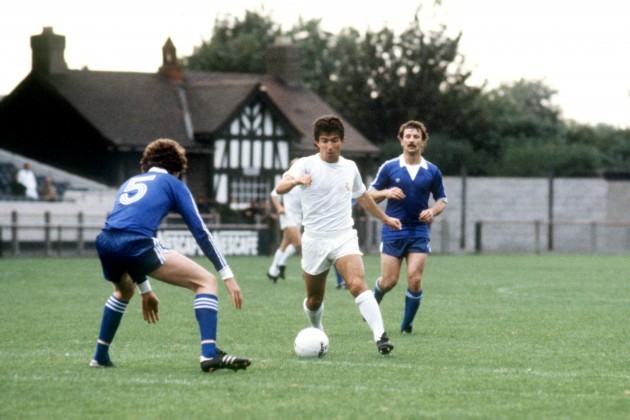 “The players had no say in where it was played, but it obviously would have been absolutely brilliant to have played a game like that in Limerick,” Kennedy says.

“Having said that – I won’t lie to you – the pitch that night was absolutely incredible. We were a team who actually could play decent football, there were some great players in that team, so it really did suit us. The pitch kind of gave us a spring in our step.”

Reporting on the game for the Limerick Leader, John O’Shaughnessy wrote: “The underdogs rose to the occasion magnificently and the 5,000 or so who bothered to lend them support left the grounds convinced that this was the greatest performance ever given at this level by an Irish club.

“The majority of the crowd went along to get a glimpse of the skills of [Real Madrid’s] household names. They were not disappointed. But they saw even greater performances from Johnny Walsh, Gerry Duggan, Pat Nolan and Johnny Matthews [who had a first-half goal ruled out for a dubious offside call].

“The one man who shaded the above quartet was Des Kennedy and the best tribute that can be paid to him was that Real Madrid put three different opponents on him.”

After he cleverly evaded the attention of his handlers, Kennedy momentarily found space and Gerry Duggan picked him out by getting his head to a free-kick that was sent in by Johnny Nodwell. Spanish international goalkeeper Miguel Angel rushed from his line, but he wasn’t quick enough to prevent Kennedy from prodding the ball to the net.

As fatigue set in for the Blues, Real Madrid capitalised. With 85 minutes on the clock, Juanito returned the favour with a free-kick that engineered the opening for Pineda to score the goal that sent them back to Spain with a 2-1 lead. 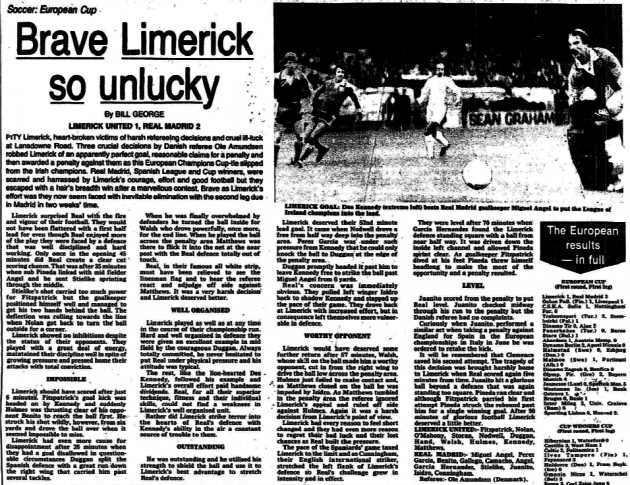 A match report from the first leg in the Examiner.

“Your man dived for the penalty, there was no doubt about that,” Kennedy insists. “For the second goal they caught us napping with a quick free-kick, and that’s where the difference came in between professional and part-time football. You have to concentrate for 90 minutes, but when you get tired your concentration goes. That’s what happened.”

The following fortnight, Limerick United ran out at the Bernabeu – the iconic footballing theatre that would host more than 90,000 spectators for the World Cup final two years later.

After discovering that their Irish opponents were capable of capitalising on complacency, there was a ruthlessness about Real Madrid as they recorded a 5-1 win in the second leg.

There was another special moment for Kennedy nevertheless, when just before half-time he beat Miguel Angel again by applying a clinical finish to Pat Nolan’s assist.

Eight months later at the Parc des Princes, as Liverpool won their third European Cup in five seasons, Kennedy was able to give his pals the inside track on their opponents while they watched the game together at The Geraldine Bar on Gerald Griffin Street.

He turns 66 this year, yet Kennedy is still frequently reminded of his heyday by the customers at his garage off the Ballysimon Road, where he has earned his living since leaving school to learn the auto-electronics trade from his father.

While on holiday in Salou, just outside Barcelona, a few years back, he was given the VIP treatment at a bar after being recognised by a nearby compatriot, who informed everyone within earshot that they were in the company of a man who was once a scourge of Real Madrid.

“They were great times for the game in Limerick. Absolutely incredible,” he recalls. “I was just lucky enough to be the one who scored the goals. It could just as easily have been Johnny Walsh or Pat Nolan or someone else. I happened to be the fella who was in the right place at the right time. 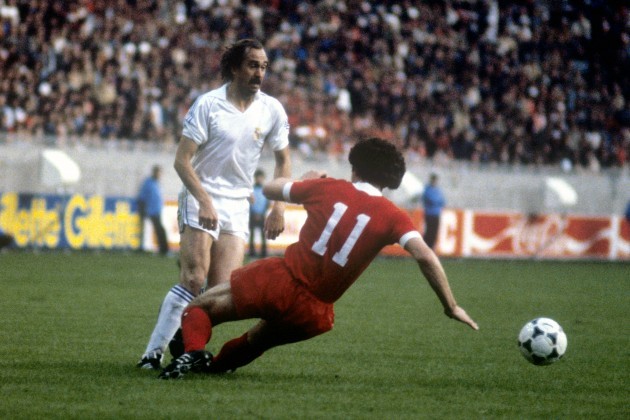 “There’s a fella I know, Barry is his name, who works in the university here and he looks after the Spanish students when they come over. What happens is that a lot of their parents will come over in the summer to see where their kids are going to university and to see what their accommodation is like and that kind of thing.

“Barry brings them on a tour around Limerick and one of the places he always brings them is up to me. He tells them the story about Real Madrid and the whole thing. They seem to get a bit of enjoyment out of it and so do I.”

With 137 goals, Kennedy remains the highest-scoring Limerick player in League of Ireland history. A career in senior football began for the former Janesboro man after homesickness persuaded him to cut short a spell in England with Southampton – against whom he later played for Limerick United in a Uefa Cup tie.

Missing out on experiencing the game at a professional level across the water is something that has never caused Kennedy any regret. For a lad who won titles and competed in Europe with a club that played its games 800 yards away from where he was raised, nothing that would have been attainable in England could compare.

“I used to go to every Limerick home game,” says Kennedy, who represented Ireland at youth level alongside players such as Liam Brady and Frank Stapleton.

“All the young fellas would be standing outside and you’d wait for a man to come along and lift you over the turnstile. I’d be at the games and dreaming about playing for Limerick some day myself, so when it happened it was an honour and a privilege. I count myself very lucky that the dream came true.”

There are several auto-electricians to choose from around Limerick, but only one can align your headlights while detailing what it’s like to score a European Cup goal at the Estadio Santiago Bernabeu.

“There was a comic I used to get when I was a small fella and Gordon Banks had a column in it. I can still see the headline now: ‘Play Football And See The World’. I loved the idea of that. 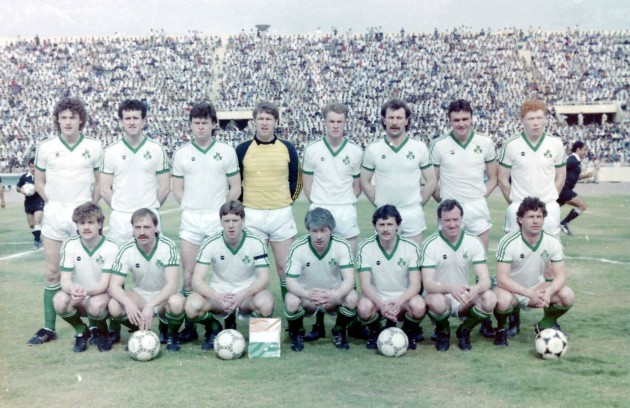 Kennedy (back row, third from right) played for a League of Ireland XI against Iraq in Baghdad in 1986.

“Through various different things, football brought me to America, Holland, Italy, Spain, England, Sweden, Iraq, Malaysia, Indonesia – places that I loved visiting but some of them were places that I wouldn’t have been if I hadn’t played football.

“I’ve always been thankful for the opportunities that football gave me. It’d be impossible to put a value on the memories that came from it.”