Brazilian President Jair Bolsonaro’s battle with the coronavirus has taken another twist. Bolsonaro tested negative for the virus, after his fourth test since contracting the illness. 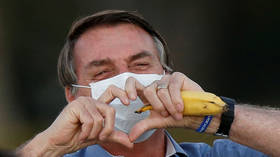 “Good morning everyone,” he wrote in a Facebook post on Saturday, before announcing that he had tested “negative” for Covid-19.

Bolsonaro first tested positive for the coronavirus more than two weeks ago. Embarking on a treatment regimen of antibiotics and the anti-malaria drug hydroxychloroquine, he continued taking regular tests until he got the negative result he wanted on Saturday. The Brazilian leader was still testing positive for the virus as recently as Wednesday.

Bolsonaro was one of the most skeptical of world leaders about the threat posed by Covid-19. He vigorously opposed lockdown measures and made a point of appearing in public without a mask, even while announcing his positive diagnosis earlier this month. Brazil’s media association threatened to sue the president after that conference, claiming that he endangered the lives of the journalists present.

In the weeks since his positive test, Bolsonaro insisted that his symptoms were mild. However, he called his quarantine at home “horrible,” and said he “can’t stand” the weeks in isolation.

As Bolsonaro downplayed the virus, the number of cases and deaths in Brazil exploded over the last two months. With 2.3 million reported cases and 85,000 deaths, Brazil is now the second-worst hit country in the world by Covid-19, behind only the United States.