A French pundit has questioned the Western narrative that Moscow played a role in the alleged poisoning of Russian opposition figure Alexey Navalny. Yet, the ‘deviation’ did not go down well with some of the French establishment. 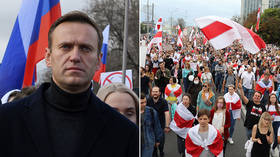 German military scientists claim that Navalny, a prominent activist in Russia, was poisoned by a potent military-grade nerve agent last month. Berlin said that it had “a lot of evidence” that the Russian state was involved but has so far failed to provide this evidence to Moscow. Nevertheless, German Foreign Minister Heiko Maas has threatened Russia with sanctions over the alleged attack, while his G7 colleagues have condemned the “confirmed poisoning” in the “strongest terms.”

However, prominent French essayist Eric Zemmour sees things differently. Though Western media are coalescing around the idea that Navalny was poisoned by the Russian state, Zemmour departed from that narrative in dramatic style.

“I’m trying to understand, and there are things that confuse me,” he told France’s Cnews channel on Wednesday night. “If Putin gave the order to poison this political opponent, then why did Russian doctors save his life and transport him to Germany for treatment by the Germans, at the risk of exposing the crime? This is strange.”

Zemmour even hinted that the US Central Intelligence Agency may have had a hand in the case.

The CIA certainly has a long and storied history of assassination attempts on its enemies, and carried out botched poisonings on Cuban leader Fidel Castro and Congolese nationalist Patrice Lumumba during the Cold War. Though there is no evidence to suggest it is, Zemmour reckons the agency could be up to its old tricks again.

“This story took place at a time when the Americans are putting pressure on the Germans to give up Nord Stream 2,” he remarked, referring to a natural gas pipeline that will supply Germany with cheap Russian gas once operational.

The US is opposing the $10 billion project, while trying to boost its own liquefied natural gas shipments to Europe. However, the higher transit costs of the American gas have thus far proven a sticking point for Germany and other EU nations.

German Chancellor Angela Merkel initially said that Navalny’s case would not deter her from pressing ahead with Nord Stream 2, yet the sentiment in Berlin appears to be changing. After dozens of EU MEPs circulated a letter calling for a halt to the project, Maas said this week that he hopes “the Russians don’t force us to change our stance on Nord Stream 2.” Despite this statement, Maas admitted that he has not yet passed the information relevant to the case to Moscow.

While being rather vague on Washington’s potential – and not proven – involvement in Navalny saga, Zemmour appeared to be rather sure on US role in the current unrest in Belarus. Opposition leaders there say President Alexander Lukashenko’s recent re-election was fraudulent.

“As for Belarus, I can clearly see the CIA behind what is happening, because this is what they have been doing for ten years,” Zemmour said. “Whenever there is an ‘Orange Revolution’, Americans, Soros NGOs and American special services are behind it as if by accident.”

Lukashenko himself would certainly agree, and has accused Washington and its allies of attempting to kickstart a Ukraine-style “color revolution” to oust him from power. France’s establishment, on the other hand, was mortified by Zemmour’s claims.

“I thought I was on Russia Today,” Nathalie Loiseau, an MEP from French President Emmanuel Macron’s party, exclaimed, shocked that opinions like Zemmour’s could be expressed on French television. In deviating from the establishment narrative, Loiseau accused Zemmour of speaking for “the Russian far-right.”

French parliamentarian Frederic Petit said that he was “flabbergasted to hear Eric Zemmour on a French channel pouring the same propaganda (conspiracy) served by the Lukashenko regime and Russia.”

Germany has handed over Navalny’s test results to the Organization for the Prohibition of Chemical Weapons in The Hague, but has made no more information about them public. Moscow is demanding a transparent investigation and has accused Berlin of trying to “discredit” Russia.

Navalny is still in hospital in Berlin, and emerged on Monday from a medically-induced coma.