Did country music megastar Garth Brooks take taxpayer money to sell President Trump’s handling of the coronavirus pandemic to the masses? The online #Resistance thinks so, but the truth isn’t as clear. 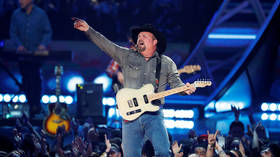 The US Department of Health and Human Services (HHS) is pushing out an advertising campaign to “defeat despair and inspire hope” about the coronavirus. Featuring interviews between health officials and celebrities – like actor Dennis Quaid and singer CeCe Winans – the $300 million campaign will hit the airwaves shortly before November’s election. The timing here is crucial, as President Donald Trump’s handling of the pandemic will be a key election issue, and one the Democrats will hammer him on.

Naturally, Trump’s opponents are displeased with the campaign. A group of House Democrats wrote to HHS Secretary Alex Azar earlier this month, calling the ads a “political propaganda campaign,” and demanding they be halted and investigated, especially as the campaign’s creator – HHS spokesman Micahel Caputo – is a longtime associate of Trump.

Politico revealed some details about the campaign on Friday, including the involvement of Quaid and Williams. However, HHS pursued one name in particular that made #Resistance types on Twitter take notice – country music superstar Garth Brooks.

Politico only said Brooks was “pursued” by HHS, and there is no information to suggest he agreed to the campaign. His team did not respond to Politico’s request for comment.

But the seed was planted, and Twitter liberals freaked out. Brooks was now tarred as a “Trumper,” and accused of “blowing” his apolitical record to support the president.

Garth Brooks is a Trumper? Did NOT think that’s what he meant by “low places”.

Garth Brooks has gone his whole career without making any political announcements, claiming he wants his music to appeal to all fans. Imagine blowing a 30 year streak to give plaudits to fucking TRUMP.

ooof. Dennis Quaid and Garth Brooks work for Trump now? This is a dark day. https://t.co/clV4xIVNbX

Brooks – the best-selling solo artist in the US – was rumored in 2017 to be performing at Trump’s inauguration. However, he declined due to his busy touring schedule at the time. Still, he said at the time that it would be an “honor to serve” the president, as he did for both Barack Obama and George W. Bush before.

Aside from Brooks, HHS also reportedly consulted Mehmet Oz – TV’s Dr. Oz, whose participation in the campaign is also uncertain. Quaid, however, has already talked up Trump’s coronavirus response, saying earlier this year that the president “is doing a good job” managing the pandemic, and has “great people handling it.” His statement drew scorn from liberal commentators, who accused him of drinking Trump’s “Kool Aid.”