Rewriting or removing bits of history that don’t align with modern PC standards is a recurring theme in the West, as these days religious leaders proclaim “shame” in their country and SJWs fight to remove monuments to the past. 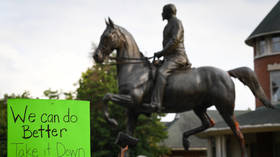 Even the most glorious history has its dark spots – but our histories are what makes us what we are. But working toward a better future while acknowledging both the good and the bad bits of the past is no longer the only option. Why bother, when you instead can fall in line with trendy social movements to attack or blackout anything and everything in the past that triggers your modern morality? These cases have been springing up all over the Western world.

Nordic airline SAS is currently in the midst of controversy after releasing a questionable ad campaign that pushes the message: “Nothing is Scandinavian.”

The woke ad attempts to shame citizens for having a national identity and tries tearing apart the things closely tied to the nation as cultural appropriation in the spirit of “our Viking ancestors.” The ad is supposed to encourage travel and the mixing of cultures, but it’s elicited quite a harsh response.

SAS claims the negative comments that came in were just an “attack” that “hijacked” the campaign. This was after they took down the video and then republished it, but disabled comments.

Those too uncomfortable with the Civil War figured the best way to fix their issue with history was to tear down statues of Confederate generals and blast them as racist.

After years of vandalism and protests at statues of Confederate generals, things reached a boiling point in 2017 in Charlottesville, Virginia. Opposition to the calls for the removal of statues of Confederate soldiers resulted in a right-wing ‘Unite the Right’ rally in August. Counter-protesters showed up in support of taking the monuments down and things turned violent, with 30 people being injured.

And remember, this is all over statues.

Baltimore, meanwhile, took down four Confederate statues in the cover of darkness only days after the violent protest.

Even classic literature is troublesome for the politically correct. Classic books like ‘The Three Musketeers’ and ‘Frankenstein’ are apparently too white, so publisher Penguin Random House and retailer Barnes and Noble teamed up for this year’s Black History Month to literally slap blackface on the books in some sort of desperate attempt to facelift history.

A total of 12 novels were given new covers in the promotional event. Some soundly asked why the publisher and retailer needed to look into the past to push diversity instead of simply looking to the future and promoting new authors.

Justin Welby, the Archbishop of Canterbury, slammed not only England, but the Church of England as well in a fiery speech on Tuesday.

Welby said he is “sorry and ashamed” of “our history” and “failure.” He said the church has not been a welcoming place for minorities and it has recently become susceptible to influence from the government’s “hostile environment.”

“We will still be having this conversation in 20 years’ time and still doing injustice — the few of us that remain, deservedly,” he promised.

The speech came after the church’s General Synod voted in favor of a motion to “lament” and apologize for past racism against ethnic minorities, both conscious and unconscious.

The Texas State Board of Education took issue in 2018 with several aspects to historical textbooks taught in classrooms, including a line referring to the soldiers who fought at the Alamo as “heroic defenders.”

The Battle of the Alamo occurred during the Texas Revolution in the 1830s and it is one of the most talked-about and studied military events in the States. A few hundred men held the fort and fought for hours against a Mexican army of 2000.

It was recommended by an advisory group of educators that describing the men who fought as “heroic” was a “value-charged word” and should be removed from seventh-grade curriculum. They also took issue with a letter written by Alamo commander William B. Travis. The letter was a call for Texas independence and a celebration of the bravery of the men fighting against impossible odds.

Prominent Texas politicians came forward to call the letter a “core” part of the state’s history and to blast the attempt to rewrite the past as “political correctness” gone too far.

Stop political correctness in our schools. Of course Texas schoolchildren should be taught that Alamo defenders were ‘Heroic’! I fully expect the State Board of Education to agree. Contact your SBOE Member to complain. ⁦@TXSBOE⁩ #txlege#tcothttps://t.co/Ph9oBoBzKF

This politically correct nonsense is why I’ll always fight to honor the Alamo defenders’ sacrifice. His letter & the defenders’ actions must remain at the very core of TX history teaching. This is not debatable to me. https://t.co/4QADkAIZIt

Down with Christopher Columbus!

Christopher Columbus may have discovered America, but the more sensitive among us find him too controversial to even be acknowledged.

Protests blasting the man as a racist who doesn’t fit modern moral standards eventually led New York City to create an advisory board in 2017 examining potentially “offensive” monuments around the city.

Though many pushed for the removal of the monument of Columbus, a counter-push, especially from Italian Americans, led Mayor Bill de Blasio to a compromise after months of public hearings. The statue remained up, but the mayor promised to add “detail and nuance” to it about Columbus and to erect another monument honoring indigenous people.

A comedy special that aired on January 31 titled, ‘Horrible Histories Brexit Day’ received hundreds of complaints for using its time to simply bash the UK.

The special, hosted by comedian Nish Kumar, claimed through what were supposed to be comedic bits that England relies heavily on imports and is responsible for making nothing.

In an attempt to protest Brexit, the makers insulted their own country’s history and even fibbed in a few parts to better make their point.

At one point Queen Victoria is shown as an airheaded queen who is learning how many products get imported into the UK. A song then commences explaining to the Queen that sugar, tea and cotton only come to the country thanks to slavery. Yet, slavery was abolished four years before Queen Victoria took power.

Journalist Piers Morgan blasted the special as an “outrageous and shameful abuse of public money,” while BBC commentator Andrew Neil described it as “anti-British drivel of the highest order.”

Anything to take down Brexit, right? Even if it means rewriting history and taking public funds from a country you then turn around and smear.

Even when history is shown warts and all, someone somewhere will still be offended.

The San Francisco school board decided last August to preserve, but cover a 1936 George Washington mural at a local high school that had drawn complaints from parents uncomfortable with the depictions of slavery.

The 13-panel ‘Life of Washington’ mural was partly covered by panels showing “the heroism of people of color in America.”

What’s ironic about the move is that the original artist Victor Arnautoff actually did the mural in protest of the violence in the United States’ history. He didn’t like the way other murals had whitewashed the country’s brutal past, so he depicted both the good and the bad in his work.

And how much did it cost to please those triggered by the artwork? Only a whopping $600,000.