Hundreds of people took to the streets in Athens and Thessaloniki to protest the arrival of US Secretary of State Mike Pompeo in Greece, with clashes erupting outside the American embassy in the capital. 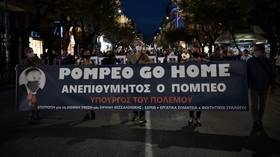 The protest march, organized by students and left-wing groups, remained peaceful along most of its route. The demonstrators carried red flags and chanted slogans, including “Pompeo is unwanted!” and “Yankee, go home!”

But things became heated as the group reached the heavily-guarded US embassy, where there were clashes, with police reportedly employing batons and tear gas.

Protest outside the US Embassy in Athens against Secretary Pompeo’s visit to #Greece. Very strong police presence, earlier they used tear gas against the protesters. pic.twitter.com/YbkcOpBtSO

A similar protest was staged in Thessaloniki. Demonstrators in the country’s second largest city made a stop outside the US Consulate, stretching the American flag on the pavement and trampling on it.

Pompeo landed in the country for a two-day visit on Monday, amid tensions between Greece and Turkey over conflicting maritime boundary claims in the Mediterranean Sea.

Athens and Ankara, who previously mobilized warships and planes over the dispute, have recently agreed to start negotiations on the divisive issue.

After a meeting with Greek foreign minister in Thessaloniki, Pompeo said that he hoped that the talks would end with a solution “that each of the two nations find more than acceptable.”