The US should be “ashamed” of itself for seeking a “show trial” instead of delivering justice to a US diplomat’s wife accused of killing British teenager Harry Dunn in a road accident, the victim’s family spokesman has said. 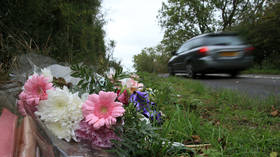 The family of Dunn, who was killed last year in a car crash, filed a wrongful death suit in federal court on Wednesday. The teenager’s parents are asking for compensatory and punitive damages, according to court documents.

The 19-year-old was killed in August 2019 while riding his motorcycle near an airbase in Northamptonshire used by the US military. His vehicle was reportedly struck by a car driving on the wrong side of the road. The wife of a US diplomat, Anne Sacoolas, admitted to being behind the wheel, yet cited immunity and ultimately fled Britain.

US authorities have refused to return her to the UK, and British authorities are considering a ‘virtual trial’ with Sacoola in absentia.

The Dunn family believes the prospects of justice being served are rather bleak and feel “completely hopeless” about the situation, the family’s spokesman, Radd Seiger, said after meeting with the UK’s Director of Public Prosecutions.

“They are being completely let down by the United States administration, who continue to wreak havoc on their mental health,” Seiger stated.

It’s clear that the Americans are just after some sort of show trial, almost to just appease the parents.

The lengthy legal battle over the accident has only invoked “further misery” for the family. Moreover, a “virtual trial” of any sort will only be a mockery of justice, and “the American government, the administration, should be absolutely ashamed of themselves,” Seiger stressed.

“We’d been led to believe there was going to be a real trial under English law, and that English justice would be delivered, albeit that Ms Sacoolas would remain in the United States and serve any sentence over there,” he added.

The UK’s Crown Prosecution Service (CPS), for its part, reaffirmed its resolve to actually see justice done in the Dunn case.

“The challenges and complexity of this case are well known, but the CPS and other partners have been working tirelessly to do all they can so that Anne Sacoolas faces the charge we have brought – causing death by dangerous driving,” CPS director of legal services Greg McGill said.

“We know this is a very difficult process for the family, which is why we wanted to assure them personally that we continue to seek justice for them and for the public.”