A MAGNIFICENT GAME, one that showcased the considerable gifts of France’s best side, ended in heartbreak for Johann van Graan’s team and his departing trio of servants.

For CJ Stander, Billy Holland and JJ Hanrahan, comes the reminder that perfect farewells are rare in modern day sport. Instead the departure gate is often a place for bitter reflection.

This is one of those times. A controversial try, scored by Antoine Dupont, following what appeared to be an obvious knock-on in the build-up to it, was the difference between Munster’s season staying alive for, at least, an additional period of extra-time.

Instead, referee Wayne Barnes decided – after much deliberation and consultation with his TMO – that the try was legal. All Munster could do was go down the other end and try and reduce a 14-point gap to seven. At least they succeeded in that.

When they reflect on this, they may draw some consolation from the fact they were involved in a classic, may look back fondly on some of the performances, their A-Listers, Stander, Damian De Allende and Conor Murray all delivering as did Gavin Coombes, Jack O’Donoghue and Niall Scannell.

But in the end, when Toulouse needed moments of magic, they were able to conjure them up. Money can’t buy everything but it can pay the wages of Dupont and Romain Ntamack. Sometimes that’s enough.

And so, Munster are out.

At least they didn’t go quietly, their contribution to this superb game something that deserves more than a mere mention.

Even on its own merits, the first-half was an extraordinary act of drama, a tale of persistence, defiance and ruthless opportunism, Munster taking their chances, Toulouse spurning theirs.

You’d be lying if you said you knew what was coming or that you didn’t fear the worst for Munster. Missing Peter O’Mahony from kick off, they then had to do without Chris Farrell from the fourth minute to the 14th; later they lost Tadhg Beirne to a rib injury.

Worse again, Toulouse arrived here with intent. Not for them, the tired old attitude so many French teams have suffered from in this competition. Be under no illusion, they wanted to win.

And it appeared as if they’d do so handily after the opening 10 minutes, the early kicking exchanges going their way when Maxime Medard found touch inside the Munster 22.

From the resulting line-out, Conor Murray cleared but Toulouse came again, Romain Ntamack and Antoine Dupont exchanging passes, Ntamack then slicing through the Munster cover. It was during the following phase, as Pita Ahki made a break that referee, Wayne Barnes, spotted the trip by Farrell, which resulted in his trip to the bin. Ntamack slotted the penalty, Toulouse had the lead.

They could have doubled it on 10 minutes, Ntamack sending his second kick of the afternoon wide of the posts. In those pressurised moments, you just couldn’t see how Munster were going to get a chance to do anything. 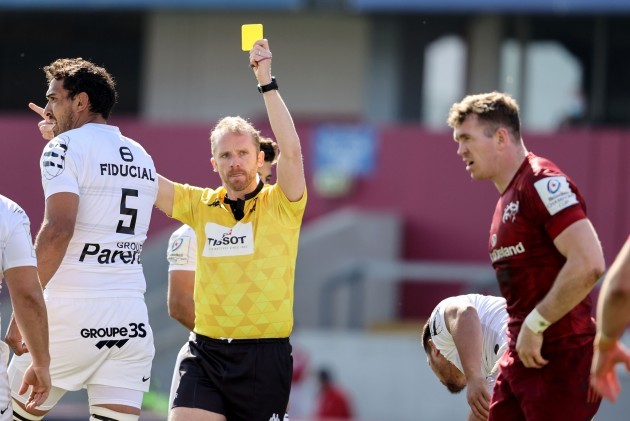 But they did. Finally, after 12 minutes, they began to play; Stander, De Allende making marginal gains, Carbery sneaking through a gap to make greater yardage, and after a sustained period of phase-building play, Munster won a penalty, Dupont penalised for offside, Carbery stroking the kick over the bar. 3-3.

Suddenly, you could hear the car horns beeping outside the stadium. Farrell was back on the pitch, Munster surviving his 10-minute departure with their reputations intact and while they were soon back in trouble, Ntamack collecting Carbery’s box-kick before weaving his way in and out of tacklers en route to the 22, they managed to scramble and avoid a try.

Another penalty was awarded by Barnes, however; Ntamack scoring it;

Then came the first half in microcosm. A try that started with a superb take by Andrew Conway just outside his own 22, ended up in Munster folklore. It was a triumph of persistence as well as skill, Farrell carrying twice; Stephen Archer – of all players – getting the team across half-way.

On they went. Gavin Coombes, Carbery and Haley took big hits – but crucially they got back up, a big cheer greeting Haley from the Toulouse replacements as he hit the floor.

When a loose pass from Murray also hit the floor from the following phase, the entire move looked like petering out. Instead it was gathering pace, Coombes tidying things up in midfield, spinning it wide to De Allende who beat his man and then parked his ego, passing outside to Keith Earls who nipped past Cheslin Kolbe and somehow got across the line.

Three minutes later, Munster and Earls had a second try, De Allende again the creator after he made a sizzling midfield break; Stander providing the support run; Conor Murray the vision when the move got stuck in traffic; the scrum-half spinning a 20-yard pass wide to Earls who ran it in.

We had 28 minutes and three seconds on the clock, Munster had a 13-6 lead.

Had Carbery tagged on the conversions, it would have been an 11-point gap. As it was, on 31 minutes, just four separated them, Ntamack knocking over his third penalty, the fifth Munster had conceded by this stage of the afternoon.

Yet despite living on the edge, Munster were doing plenty of things right; O’Donoghue nicking a line-out as well as getting a nice breakdown steal for his CV. Coombes too was excelling; Carbery was offering a running threat – and, when he slotted over his second penalty on the stroke of half-time, Munster had the relief of heading for the break with a seven-point lead. 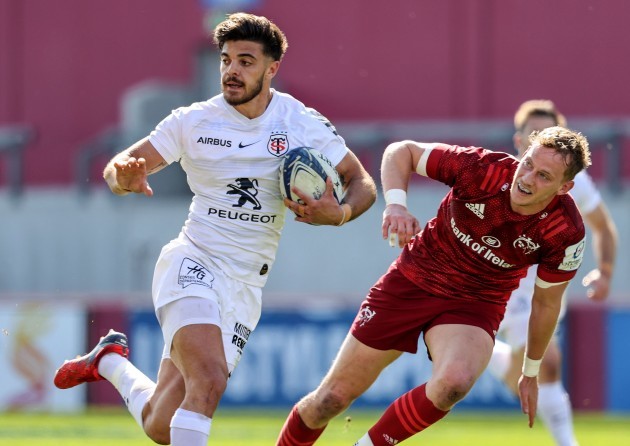 Three minutes after the restart, Toulouse were level, Dupont finding gaps where none appeared to exist, before Ntamack carried on the move, lobbing a kick out wide where Matthis Lebel was waiting to collect and score. Ntamack added the extras, the scores were level.

Again, not for long. By 50 minutes we had a third Munster try – Coombes getting it after Stander made the brave decision to opt for a tap-and-go from five metres out, when a handy three points was the safer alternative. Ambition met its reward, however, as Coombes barrelled across for the try, the scoreboard moving to 23-16 when Carbery added the conversion.

The scroreboard would move again on 55 minutes, Marchand getting Toulouse’s second try, Ntamack his fifth kick, after a trip by Earls on Kolbe gifted Toulouse territory and possession.

By now we knew we were witnesses to a classic, JJ Hanrahan’s penalty restoring Munster’s lead; Dupont’s 68th minute try cancelling it out, the scrum half appearing in the right place at the right time after Conway had bought Lebel’s dummy. Another Ntamack conversion made it a four-point game, Toulouse in the ascendancy.

Still, there were 11 minutes left on the clock, theoretically enough time to stage a comeback.

Comebacks are only possible, though, if you can get your hands on the ball and for those concluding minutes, Munster couldn’t; Toulouse’s game-management proving to be exceptionally good, rewarded with a 76th minute Ntamack penalty.

That left Munster needing a converted try to force extra time. But soon the impossible was required as Dupont crossed for his second try.

It could, indeed should, have been rubbed out. Barnes, however, felt it was legitimate. Fourteen points separated the sides. One last attack saw Coombes score again, Casey converting. They went down fighting. That may be scant consolation.