In a solidarity gesture with BLM protestors, a woman holding a baby offers herself as a human shield in case the police start shooting, raising the question of “how much is too much” on social media. 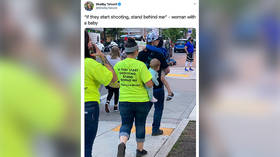 A woman wearing a now popular among protesters ‘If they start shooting, stand behind me’ T-shirt was seen on Monday at the Capitol Hill Autonomous Zone (CHAZ), which was recently renamed to CHOP (Capitol Hill Organized Protest or Capitol Hill Occupied Protest, depending on who you ask).

Tennis player Shelby Talcott shared the picture of her on Twitter.

“If they start shooting, stand behind me” – woman with a baby pic.twitter.com/JZkGWOLH3f

Social media users were disturbed by the woman’s gesture, with some calling for her to be arrested as her actions could be classified as child abuse.

Others compared the protester to Islamic State (IS, formerly ISIS) terrorists, who use women and children as human shields.

People on social media pitied the child, while no one seemed to have any support toward his mother.

The ‘If they start shooting, stand behind me’ sign has gained popularity among non-black attendees of the protests, which were sparked by the death of George Floyd – an African American man in Minnesota – at the hands of police. After his death protests quickly spread around the country and the world, some descending into violence and riots.

In Seattle, where Shelby Talcott took the photograph, protesters barricaded streets around East Precinct last week, which had been abandoned by police. The area was turned into a camp for BLM activists. Supporters claim the site serves as an example of community cooperation and self-policing, but their message has been distorted by violence and lawlessness.