Officials want to add 17 EU countries to the list. 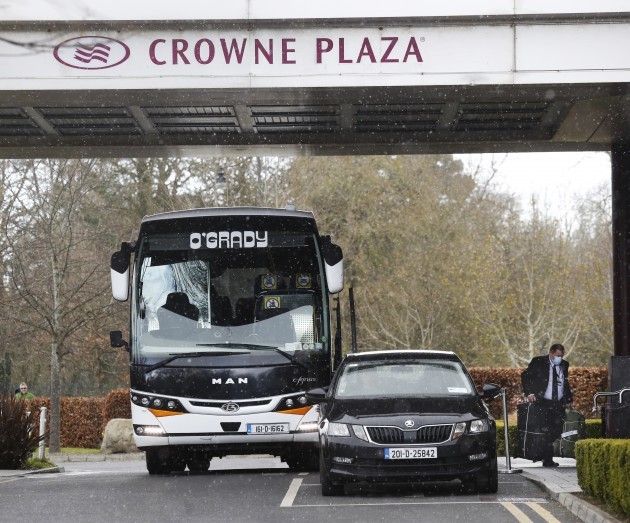 The Crowne Plaza Hotel, a designated quarantine hotel in Dublin

OH VIENNA. FEW eyebrows were raised when Austria featured on the list of so-called ‘designated states’ as part of the introduction of mandatory hotel quarantine in March.

But the Alpine nation’s inclusion has been questioned after public health officials advised that more European Union states should be added to the list, provoking an angry reaction by some in government last week.

There is currently a lockdown underway in Austria, with no tourism or leisure travel allowed. Non-essential shops are closed until 11 April. Over 34,000 people currently have Covid-19 in the country.

It was initially reported that 17 EU countries – including France, Germany and Italy – had been recommended for inclusion as part of a wider expansion of the list.

All passengers arriving from these countries would have been expected to pay almost €2,000 to stay in a hotel to quarantine for almost two weeks, but concerns within government and by the Attorney General skewered such plans.

One problem raised by opponents of the plan is the belief that adding EU countries to the list would disrupt freedom of movement rights, a key pillar of the European project.

This reservation does not appear to be solely domestic: a government source told The Journal that the recommendation had caused “consternation” in European capitals.

Yet such protestations overlook an inconvenient truth: an EU member state, Austria, is already on the list and remains there despite the concerns expressed last week.

The issue could be a thorn in the side for those in government who are opposed to plans to add more EU countries to the list.

Under Section 38E of the Health (Amendment) Act 2021, which sets out what a so-called ‘designated state’ is in law, the Health Minister may add any state “where there is known to be sustained human transmission of Covid-19 or any variant of concern” to the list.

Specific reference is made to travel into Ireland from countries that could lead to higher rates of infection or the importation of cases related to variants of concern.

Austria was added to the list in mid-March because of an outbreak of the B1351 (South African) variant – of which there have been relatively few cases in Ireland – in the state of Tyrol. No opposition to its inclusion was aired publicly at the time.

Although this was an unprecedented move by Ireland, it was not the first time an EU country introduced travel restrictions from other member states since the beginning of the pandemic.

In fact, Ireland was on the other end of inter-EU travel restrictions earlier this year, when Germany banned non-essential travel from a number of countries on 30 January to prevent new cases of the B117 (UK) and P1 (Brazilian) variants.

The ban restricted arrivals by air, bus, rail and sea, but did allow for exceptions in some cases: Germans and other nationals living in Germany were allowed to return, while passenger transits, freight traffic, and key workers were unaffected.

The curbs on travel from Ireland and Portugal have since been lifted, but Germany has since introduced new measures to prevent travel from Austria, the Czech Republic and Slovakia.

These measures are not even the most extensive introduced by an EU nation to date.

Three days before Germany’s initial ban, Belgium introduced its own blanket travel ban on 27 January, preventing all non-essential trips into and out of the country – covering every other EU member state – until 1 March. That was later extended until 18 April.

Denmark has likewise restricted travel from all other countries until 20 April, while Finland has also introduced restrictions on entry from almost all “high-risk” countries, including the need to have a negative Covid-19 test, until 17 April.

However, such restrictions have caused consternation among European officials in recent months.

Almost immediately after Belgium’s initial ban was introduced, the European Commission expressed reluctance about countries closing their national borders, before going further last month and suggesting that doing so is not in line with its principles.

European Commission spokesperson Christian Wigand noted that travel restrictions to curb the spread of the coronavirus had to be “proportionate”.

“Our aim is still to find solutions as soon as possible in order to ensure the functioning of the single market and respect for Europeans’ rights when it comes to freedom of movement,” he said.

The commission has warned Belgium, Denmark, and Germany – as well as Finland, Hungary and Sweden – that they risk disrupting the free movement of people and supply chains as a result of their restrictions.

Europe’s response to those countries echoes the language contained in two recommendations passed by the European Council in recent months, which deal with travel restrictions and how they could affect freedom of movement.

In recommendation 2020/1475, passed in October, the council noted that member states should adopt a joint approach to tackling the pandemic, and that restrictions that could affect freedom of movement should be “proportionate” and “non-discriminatory”.

Another recommendation passed in February warned against the reintroduction of border closures or blanket travel bans – such as those introduced by Belgium.

Instead, the council said that testing and quarantining of arrivals should continue, particularly if passengers arrive from areas where the incidence of new variants is higher.

The overall recommendation was backed by advice from the ECDC itself, which proposed strengthening all health measures “including those relevant to travel” to respond to emerging variants of concern.

The emergence of new variants was a factor when Austria was added to the list last month, but the criteria has since been changed by the government’s Expert Group on Travel to allow countries with high case numbers to be included too.

Cases across Europe have been spiralling since the B117 variant – which took hold in Ireland over Christmas and now accounts for 90% of our cases – began spreading on the continent.

After three months of stringent lockdown measures, Ireland now has one of the lowest rates of community transmission in Europe, while some of the countries that health officials proposed adding last week were classified as ‘dark red’ on the ECDC map: 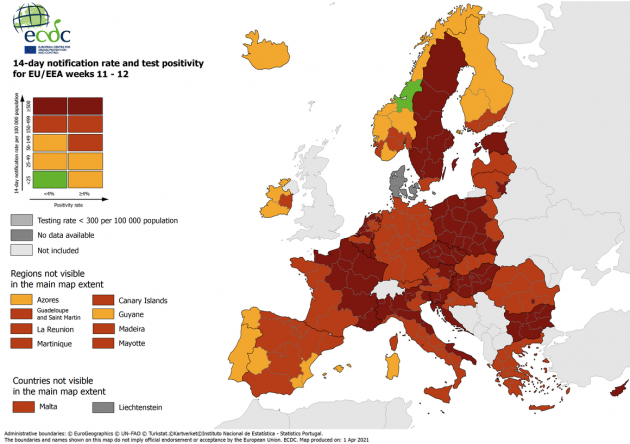 It’s understood the change was made because not all countries carry out genome sequencing of Covid-19 cases, so data about the extent to which certain variants were circulating was lacking.

In short, Austria was added to the list when one set of criteria was in place, but proposals to add 17 more EU countries are relying on new criteria.

However, although the EU and ECDC outline specific recommendations about mandatory quarantine, they do not mention the requirement that passengers travelling across the continent should pay to stay in a hotel to isolate.

There are questions among some in government as to whether Ireland’s system – which is unique in the EU – could affect the freedom of movement principle.

One compromise that has been put forward is the possibility that quarantining at home could be expanded.

Talks are ongoing domestically to try to iron out the issues about expanding the list further, with health officials – including Minister Stephen Donnelly – said to remain keen on adding more countries to it.

There are particular worries about a rise in cases across the continent in recent weeks, and the emergence of a new variant in France, nicknamed the ‘Breton variant’, which appears to be more difficult to detect when using gold-standard PCR tests.

Part of the row is procedural: Minister for Foreign Affairs Simon Coveney was reported to be privately “furious” about the proposals, stating publicly that he should have been consulted about the plans before they were leaked to a national newspaper.

Some in government also believe there was not enough debate about countries that were deemed to have ‘high’ levels of transmission before recommendations were made to add to the designated list last week.

But there are practical issues at play as well.

Tifco, the company which is providing hotels for incoming passengers to isolate, is currently providing 2,600 rooms, around 650 of which are currently in use.

It’s likely that including more countries on the list would mean more hotels would have to be brought on stream, which would take time.

There are further fears about a constitutional challenge to the measures, and what adding countries with large numbers of Irish citizens would mean, particularly those where students are returning from Erasmus.

Whether the debate lasts that long remains to be seen: the hotel quarantine system is only meant to be “temporary”, sources believe, perhaps just for a few weeks as case numbers reduce.

Discussions about what happens next will continue today.