Houston Mayor Sylvester Turner is ratcheting up enforcement of a state Covid-19 mask mandate, ordering police to cite residents who refuse to wear a face covering after being warned and to penalize them with a $250 fine. 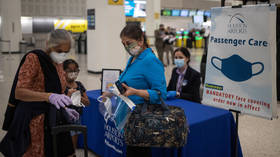 “For months, we have been focusing on education and not citations, but now I am instructing the Houston Police Department to issue the necessary warnings and citations to anyone not wearing a mask in public if they do not meet the criteria for an exemption,” the mayor said Monday at a press briefing.

The citation comes with a $250 fine. Lives are at stake, so I am taking this step to save lives and slow the virus from spreading in the month of August.

Turner, a Democrat who has been Houston’s mayor since 2015, announced the crackdown after the city reported its fifth straight day with more than 1,000 new coronavirus cases. Houston, which ranks as the fourth-largest US city and has a population of more than 2.3 million, has reported nearly 51,000 Covid-19 cases and 478 deaths since the pandemic began.

Police won’t respond to calls from residents reporting people violating the mask mandate, Turner said. Instead, they will issue citations when they encounter people on their regular patrols who aren’t wearing a mask in public and refuse to do so when given a warning.

“Please don’t get mad at police officers,” Turner said. “It’s all about public health and driving our numbers down.”

The mayor said it’s particularly important to reduce the spread of Covid-19 heading into schools reopening next month and the approaching flu season. Houston had more new coronavirus cases in July than in the preceding four months combined.

Cities and states across the US have tightened social distancing orders in recent weeks amid a resurgence of Covid-19 infections. July marked the country’s worst month for new cases, with 1.86 million, or about 40 percent of the nation’s overall total of 4.65 million since the outbreak began.