This article is part of The Good Information Project, a new initiative from The Journal to help create greater understanding of big issues we face. This month we are focusing on the question ‘What could a shared island look like?’

WHEN IT COMES to any discussion of a united or more shared island, how to reconcile two very different healthcare systems is a knotty puzzle.

The people of Northern Ireland put a huge value on their free-at-the-point-of-access health service. In a 2019 poll on healthcare, people were asked whether the two different healthcare systems would influence their vote in a referendum on a united Ireland.

Overall, 52% said that it would discourage them from voting for a united Ireland.

The highest plurality of voters across all age categories, genders and religions said that the different healthcare system would be a deterrant, with 9% saying it would encourage them to vote for a united Ireland and 32% saying it would make no difference (7% said they did not know).

While the healthcare services both north and south on the island of Ireland have some big differences, they also face similar problems. One of the bright spots in recent years has been north-south initiatives between the two.

The North West Cancer Centre is a shining light in all-island healthcare, while a joint approach to cancer aims to share research and hopefully make treatments more accurate. The all-island milk bank, based in Enniskillen, receives donations from across the island and distributes it to mothers north and south.

These are examples that have transcended politics and resulted in practical benefits for patients on the island – but a lot more research is needed to scope out the possible benefits in other areas of healthcare, and potentially figure out whether the twain can meet.

Experts say it’s possible that a more collaborative approach to stroke services, orthopaedic services, transplant services, and public health issues around obesity and mental health could see improvements for patients – but the research isn’t there to show it at the moment.

This piece will look at the extent of the differences between the two systems, the cost of the systems, and the several organisations already operating for years to increase health collaboration for patients in both jurisdictions.

Two systems facing a lot of the same problems

In Ireland, a GP appointment costs around €60, a visit to the Emergency Department costs €100, and prescription costs are also paid for directly by the patient. There is also a two-tier healthcare system in Ireland. Around a third of the Irish population have a means-tested medical card, which gives them access to healthcare for free, while 46.2% of the population has private health insurance.

Ireland is an outlier across the EU in how a large proportion of the population pay in full for GP visits, instead of it being free or heavily subsidised.

It’s also not clear to what extent free access to GPs leads to better health outcomes for patients, though there are concerns that if GP visits are reduced by charging for them, that it might not always apply to “unnecessary” GP visits and people may not get necessary treatment as a result. 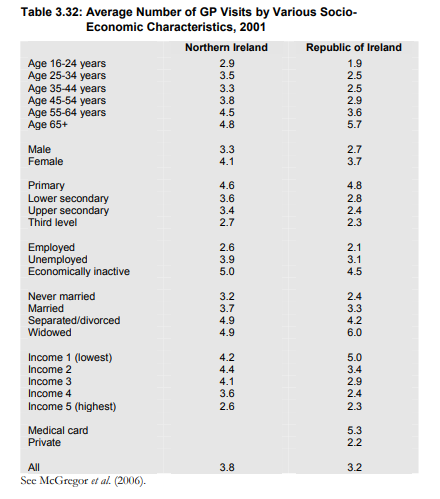 Despite the different healthcare systems, the people on both sides of the border face similar healthcare challenges: an ageing population that will need more care and a discussion on quality of living; better cancer services; a waiting list crisis; obesity and diabetes; and mental health issues, particularly after waves of severe restrictions.

The UUP has said that the Health and Social Care Act introduced in 1948 aimed to give access to people “on the basis of need rather than ability to pay”. It now says that its wish is to “see an end to headlines about our health service facing swelling waiting lists, delivering critical services inefficiently, and lurching from one crisis to another”.

That will sound familiar to many in Ireland who have witnessed similar criticisms of the HSE, and where the Department of Health portfolio has been labelled ‘a poisoned chalice’.

Even the most ardent republican would still acknowledge the value that people attach to the National Health Service. That is something that is deeply cherished here because services are free at the point of delivery.

“But services aren’t free – we pay for them through our taxation.

“There are two different models. What strikes me often when we’re talking about it is there’s a very poor understanding of those systems other than a kind of very broad brush approach.”

In the BBC programme Spend It Like Stormont, the permanent secretary for NI’s Department of Health, Richard Pengelly said that the current health budget spend isn’t sustainable.

“If we continue on that trajectory [of health budget increases of 6% a year], within about 20 years the health service will need virtually all the money that’s available to the Executive.” 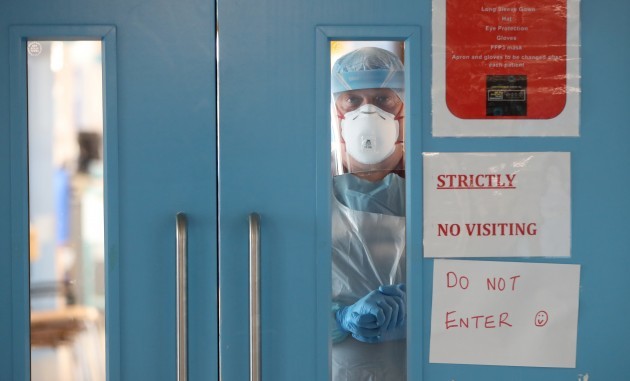 “I suppose we are at a point that we can look at it in terms of a useful case study,” said Professor Deirdre Heenan. “It’s the same pandemic in the north as in the south, but how was it treated? What were the policies? Were they different?”

On any cursory examination, it makes sense to say ‘we should be looking at this as an island’. We repeatedly heard ‘this virus doesn’t respect borders. This virus knows no borders’. But surely the obvious next point is ‘Yes, fair point. So what? What are you doing about it?’

A Memorandum of Understanding was signed between both jurisdictions north and south, pledging cooperation on the island of Ireland. But Heenan questions whether this was a political show, and asks what changed as a result, how often both Chief Medical Officers spoke to each other, and what positive effect it has had on patients and the island’s Covid response.

Professor Heenan said that there needs to be a clearer focus, or plan, of what calls for an all-island response would mean in practice.

“Our Deputy First Minister [Michelle O’Neill] talked about the waiting lists recently, and referred to the fact that we needed cross border healthcare to address our waiting lists. She may be right, she may be wrong, but we simply don’t have the evidence to support what that would look like,” she told The Journal.

“There are many examples where people talk in a glib, off-the-cuff fashion about how wonderful it would be if we had a better system across this island. I suppose my issue is: where are the studies that have the evidence to show that there would be economic benefits, and better outcomes for people on this island?”

Some shared services – but not many

Professor Heenan said that two “flagship” areas of healthcare that have taken an all-island approach and shown to be better than two separate approaches are paediatric services and cancer services.

“Children’s heart services are on an all-island basis. Prior to that, children from the North would have gone to Birmingham. You can imagine if you had a sick child who needed an intervention, and someone talked about getting you a flight to Birmingham, how traumatic that would be: where would you stay, what would be the cost of it?

“There was talk about developing a service in the Royal Hospital in Belfast, but a realisation that we didn’t have the critical mass to support that.

“So there was an agreement that the service based in Dublin could be used [Children’s Health Ireland at Crumlin], and I haven’t met anyone yet who doesn’t view it as anything other than a resounding success. The politics disappeared. No one said ‘I’m not going to Dublin, because I am not in favour’.” 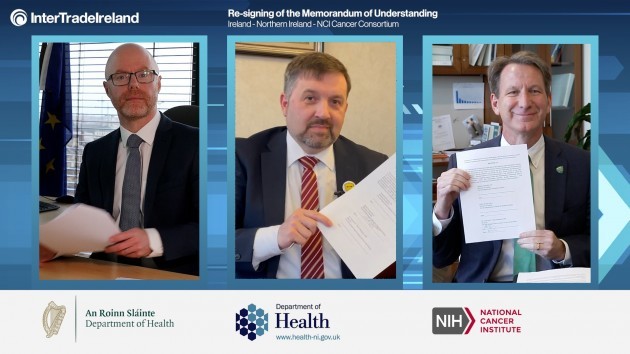 Last week, Health Minister Stephen Donnelly and Northern Ireland’s Health Minister Robin Swann signed a new Memorandum of Understanding with the US National Cancer Institute with the aim of “reducing cancer incidence and mortality on the island of Ireland through cross-border and transatlantic collaborations”.

The joint-initiative was originally established in 1999 after the Good Friday Agreement. In the 20 years since, it has established robust cancer clinical trials infrastructure on the island of Ireland and trained over 500 clinicians and scientists to bolster research.

Prof Mark Lawler, Chair in Translational Cancer Genomics at Queen’s University Belfast said at the event to mark the signing: “Cancer knows no borders, so neither should we. We need to compete not against each other, but against a common enemy – cancer.”

There have been other small steps towards cooperation: The Cooperation And Working Together (CAWT) facilitates cross-border collaborations in health and social care, and the HSE has a North-South unit to promote cooperation with health providers.

The Taoiseach’s Shared Island Unit is looking into how healthcare on the island of Ireland could be more collaborative, and has commissioned the ESRI to do research on the topic of healthcare.

At a recent talk hosted by the University of Cambridge, Fianna Fáil TD Jim O’Callaghan said that collaborations wouldn’t happen overnight, but added that Ireland’s health system was gradually moving to be more like Northern Ireland’s healthcare system.

“The current Irish policy when it comes to healthcare [is]the Sláintecare document… as agreed by all parties in the Oireachtas. It’s referenced and recognised in the current Programme for Government of the Irish Government, which is entitled ‘universal health care’, which is a clear statement of where we are going.

The path that we are on puts Ireland on a path that is going to lead to the convergence of standards between the two parts of the island. We’ve short term commitments that include extending free GP care to more children and older people. Although we don’t have free at the point of delivery as yes, it is, I would have thought, a very clear point of direction to where Ireland is heading.

“I think there would be a convergence between the two jurisdictions when it came to healthcare, if the endpoint would be free at the point of delivery.”