NASA has shared its latest breathtaking snap of Saturn taken by the Hubble Space Telescope, which shows the so-called planetary ‘lord of the rings’ at the height of its summertime, some 839 million miles from Earth. 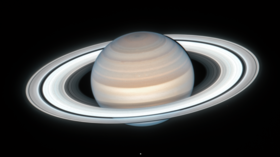 The photo, snapped on July 4, 2020, showcases summer in Saturn’s northern hemisphere and includes the gas giant’s moons – Mimas on the right, and Enceladus at the bottom.

Here’s a brand new look at Saturn! 📸Like Earth, Saturn is tilted on its axis and has seasons. In this Hubble image, taken earlier this month, it’s summertime in the northern hemisphere: https://t.co/uoQ6pJY36opic.twitter.com/h6ItMUi4ee

The picture captured a number of atmospheric storms, which come and go each year but can have dramatic effects on the coloration of the planet’s mostly hydrogen and helium atmosphere.

The traces of ammonia, methane, frozen water vapor and hydrocarbons provide the yellows and browns visible in the picture, offset by the red and blue hazes at the north and south poles – both of which are the subject of much speculation.

The red haze may be due to the increased sunlight, which might result in the burning off of ice from aerosols in the atmosphere, which add a blue tint during the winter.

The seasonal snaps were part of the Outer Planets Atmospheres Legacy (OPAL) project, aimed at improving understanding of how our solar system’s gas giants formed and how they evolve over time.