A ‘human bone’ spotted on Mars has unleashed a flood of speculation on social media. But the excitement is misplaced as NASA has already denied the image depicts a bone, human or extraterrestrial. 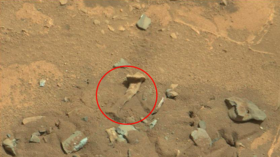 The image shows what looks a lot like a human thigh bone amid the rubble on Mars. It caused a frenzy on Twitter, where it was shared by astrophysicist Antonio Paris and others on Sunday. The photograph was taken by the Curiosity rover’s MastCam on August 14, 2014.

However, the apparent sign of human life on Mars was already debunked by NASA – six years ago. The space agency explained at the time that the ‘bone’ is really just a rock that likely got its femur-like shape after being “sculpted by erosion, either wind or water.” NASA added that if life did exist on Mars, it would be simple life forms like microbes, as the planet is unlikely to have had enough oxygen to support more complex organisms.

As the search for life on Mars continues, so too do the images that create excitement among UFO enthusiasts, from alien crabs to human faces, spoons and mushrooms, all sorts of strange things have been spotted on the Red Planet, most which have been debunked.

Curiously, a January 2020 report found that human bone density deteriorates by one percent per month on Mars, as there is one-third the gravity there as is on Earth, and the drop in gravity makes bones lose minerals.