A group of former US service members has deployed to Portland to support demonstrators laying siege to the city’s federal courthouse. The new ‘wall’ has emerged after self-described moms and dads formed their own human shields. 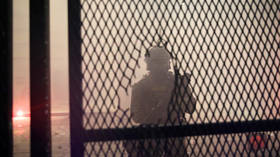 The cadre of military veterans assembled in front of the courthouse on Friday night, creating a line between protesters and a protective fence wrapped around the building. Some of the vets stood with their hands placed behind their backs, while others held signs that read “Disabled veterans 4 BLM” and “Federal troops defend property but this does not give them the right to take away my constitutional freedom.”

At least one member of the group came to the protest wearing a military uniform. Others donned Air Force, Navy, and Black Lives Matter shirts.

Another huge crowd tonight in Portland, including a new “wall” on the front lines: a Wall of Vets.Here’s a look at the line of military veterans getting set up here in front of the federal courthouse. Behind them, the Wall of Moms and the Wall of Dads are arriving. pic.twitter.com/gGnXHjI3k2

One of the veterans told the Daily Mail that he came to support protesters after a former Navy serviceman was beaten by federal agents. Around thirty ex-military members participated in the ‘Wall of Vets’, the ex-marine said.

The “Wall of Vets” line up in protest outside of the Mark O. Hatfield Courthouse in Portland, Oregon on Friday, July 24, 2020. Protesters gathered to speak out against inequality and racial injustice. Photo for the @nytimes#WallofVets#Portlandpic.twitter.com/sABQvsKsXi

The human ‘wall’ mirrors similar tactics adopted by two other groups, Wall of Moms and PDXDadPod. The ‘moms’ began shielding protesters on July 19, followed by the arrival of the ‘dads’, who reportedly even helped to provide protesters with leaf blowers so that they could redirect tear gas fired by federal agents. The ‘moms’ and ‘dads’ were also in attendance on Friday night.

Protests outside the courthouse and around Portland’s downtown area have been ongoing for nearly two months. Federal law enforcement officers were sent to defend the besieged building earlier this month, leading to accusations that the agents were unlawfully seizing and detaining demonstrators.