Budapest has approved the lifting of the controversial crisis powers which allowed Prime Minister Viktor Orban’s cabinet to run the country without parliamentary consent during the Covid-19 epidemic. 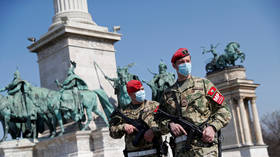 Controlled by Viktor Orban’s ruling Fidesz Party, the Hungarian Parliament voted on Tuesday by 192 votes to none in favor of the government’s request to end the so-called “state of danger.” The cabinet will now formally lift it later this week.

Known as the “Coronavirus Protection Act,” it was adopted by lawmakers back on March 30. The emergency powers enabled Orban’s government cabinet to rule by decree until the state of danger was lifted. The prime minister has said that the powers allowed him to tackle Covid-19 swiftly and efficiently.

However, critics at home and abroad claimed the emergency law gave Orban an opportunity to abuse power, and that it steered the country away from vaguely defined “Western values.”

Hungary defended itself against those allegations. Government spokesman Zoltan Kovacs sharply rejected the criticism, saying that Budapest is “being subjected to a political witch-hunt and coordinated smear campaign.”

Hungary itself has been among the EU nations least affected by the pandemic. As of today, it has over 4,000 coronavirus cases, and 565 deaths.