Ireland’s Nhat Nguyen on his experience with Covid-19, his Olympic journey and his ambitions for Tokyo 2021.

NHAT NGUYEN’S FAMILY were one of many across the country to experience Covid-19 first-hand in January.

A positive test result came as no surprise to the Irish Olympic hopeful, given his nearest and dearest had already contracted the virus.

“It was a very long process,” Nguyen says, reeling off dates and details. The badminton star was negative and asymptomatic when his sister tested positive on 14 January, so he went elsewhere to quarantine as a close contact.

“Everyone in the house got it. I was isolating in a hotel for 14 days, well 10 days, and then the 11th day I got symptoms. Then I got tested and that’s when [I found out]. I was out in a hotel for three weeks so that wasn’t fun. But definitely, during that time, I matured a lot. It wasn’t a fun time, but we got over it so it’s fine.”

Born in Vietnam but bred in Ireland between Cavan and Dublin, family means everything to Nguyen, so understandably it was a very worrying time.

Recalling the experience, the 20-year-old grew a little emotional towards the end and it looked as if his eyes glossed over, though it was difficult to tell through the pixels on Zoom.

His symptoms at the time weren’t the worst, thankfully. But the after-effects have hit much harder, as he reports more tiredness and low energy levels.

“I’m still having the effects of it now,” Nguyen nods. “I think it’s called long Covid, the long term-effects. I don’t think I got it bad but I think the long-term effects just affected me a little bit more.

“It’s really strange because I’ve had a lot of blood tests and a lot of doctor appointments, I actually have one tomorrow, just trying to sort out what’s going on. I think my bloods are a little bit not correct so we need to sort that out soon.

Definitely I think soon it will get better, but I don’t feel like myself yet coming back from it.

“I get tired much quicker than I used to before. After 20, 30 minutes of intense play, I can definitely feel, ‘Wow, this is not me.’ Normally I can go 50 minutes, an hour, and I should be fine. You definitely don’t feel like yourself. It’s slowly getting better.”

Nguyen made a scintillating return to the big stage at the All-England Open in mid-March, though, showing zero ill-effects as he pulled off a huge upset on a St Patrick’s Day to remember.

The Dubliner produced an excellent performance to beat world number 14, Srikanth Kidambi of India, in his men’s singles round-of-32 match, as his Road to Tokyo hit new heights.

Having come close to beating Kidambi before, Nguyen knew he had it in him, but was concerned about the disruption to training after his brush with Covid. His confidence in his game may not have been sky-high, but he felt more mentally prepared than ever.

“Not being in the best shape, I was a little bit more experienced in my approach, and during the game as well, because I had to think of other ways to win than try to use my physical side. I think I played a great game, I should play like that more often. 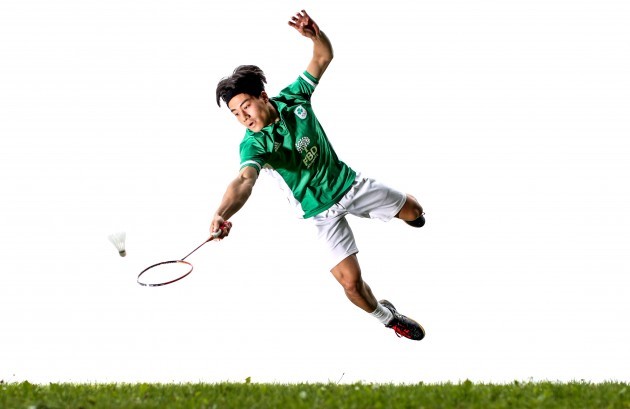 “I was so happy, delighted. I’ve had so many chances to beat players like him in the top 10, I didn’t take them and that was very frustrating for the last two or three years. I think I needed that win to boost my real inner confidence that I can make the next step, I can play with the the best players in the world.

“It’s a huge win for my confidence going forward. I definitely want to build on that.”

The following day, he exited at the last-16 stage, losing to another highly-ranked player in Dutchman Mark Caljouw. In all, he learned a huge amount from the competition.

It’s all a learning curve, playing against top players, and he vows to be better next time.

I kind of let it control me a little bit. I was like, ‘Oh, wow.’ A little bit of expectation on me, a little bit pressure, I don’t think I handled that well. That could be something that could happen again in the Olympics. So I’ll be more prepared and more ready to handle my emotion because it got the little bit better of me.

“I need to get down from a high to be in the present. But I was really, really happy that I’ve made that step and I’ll definitely try to push from there.”

Self-improvement is huge for Nguyen, and it’s something he talks about quite a lot. Getting better each and every day is his goal, with plans to shake things up in Tokyo, all going to plan, and to really peak at the 2024 Games.

His positivity shines through in every word he utters, no time more so than when he’s discussing the pandemic as a whole and how it’s impacted his blossoming career. He’ll continue to control the controllables, though.

I think it has affected everyone not being able to travel as much — and even trying to go to tournaments, there’s so many papers to do. I don’t even know how many Covid tests I’ve had since the start the year, I think it could be 20 or 30, just a lot.

“It’s affected a lot. But as an athlete, you just try to stay positive and try to focus on yourself and how to get better, even though the situation at the moment is quite tough.

His new mini-documentary, My Olympic Journey, shot solely by Nguyen himself gives you a greater insight into that, and was a fun and enjoyable project, he says, with loads of hard work and time involved.

FBD Insurance is proud to present a fantastic mini-documentary, titled ‘My Olympic Journey’, starring our long standing ambassador Nhat Nguyen. The film was shot solely by Nhat and gives a real insight into what it takes to become an Olympian. A man of many talents…#TeamIreland pic.twitter.com/hziIsim9g4

“I watch a lot of videos of that on YouTube. I think that could be quite cool and something different for an athlete to try out. I don’t know, go to Krispy Kremes or something like that and try the food,” he laughs. “It was a very fun experience.”

With his budding vlogging career on hold, his entire focus is on the coming months. Four weeks of practice and hard training lie ahead before European Championships in Kiev, Ukraine. A result there is the target, as he looks to get “physically back in shape, proper 100%” in the lead-up.

And then it’s all systems go towards Tokyo. With 41 qualification spots available, Nguyen  is “sitting quite comfortably” at 25th. “I feel quite confident that I should be going, but you never know.”

Striving towards improvement remains the main thing, and he’s focused on emulating what Scott Evans did at Rio 2016 in causing a shock and getting to the last-16.

“I did it at All-Englands so I definitely feel I have that in me,” Nguyen concludes. “But again, it’s how I handle my nerves, how I handle the situation is the most important thing.

“Definitely that is one of my goals, to emulate what Scott did in 2016. It’s a very tough goal, don’t get me wrong. Very, very tough but you have to aim high.

FBD Insurance is a principal sponsor to Team Ireland since September 2018. As part of its sponsorship, FBD is supporting Team Ireland’s Olympic hopefuls to enable them to focus on personal bests and breakthrough performances at the Summer Olympic Games in Tokyo.