On 24 November, Eddie Brennan’s departure as Laois boss was confirmed. By 9 December, Brennan’s former coach Niall Corcoran was confirmed as an addition to the Wexford backroom team for the 2021 season. 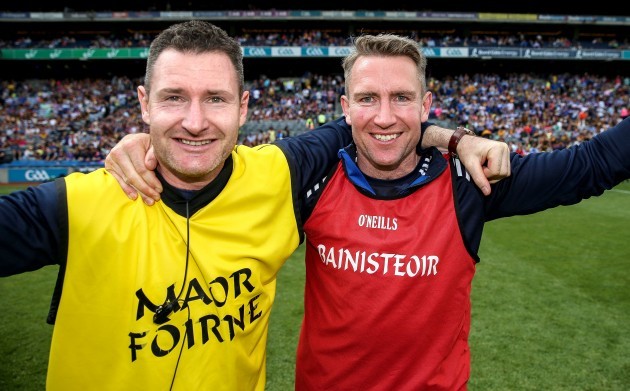 A Leinster and National League winner with Dublin during his playing career, Corcoran is enjoying a growing reputation in the game as a hurling coach.

His two-year spell under Brennan saw Laois seal Joe McDonagh Cup glory in 2019 before a famous win over Dublin that sent shockwaves around the country. In last year’s championship, Laois agonisingly lost to Clare by a point in the opening round of the qualifiers.

It represented steady progress for the O’Moore County, though the journey came to an end when the management team of Brennan, Corcoran and Tommy Fitzgerald opted not to commit for another year.

In Wexford, Brendan Bugler’s decision to step away as coach left a void to be filled. Seeking to add some freshness to the set-up, Fitzgerald recognised the green shoots of progress Corcoran helped nurture in Laois.

Corcoran admitted he was surprised when the call arrived from the Clare man. The pair  agreed to meet for a conversation in Dublin.

What Fitzgerald intended to be a 15 minute chat lasted for almost two hours and concluded with an offer to join the 2019 Leinster champions’ set-up.

“On having a chat with Davy, I was surprised the call came,” Corcoran tells The42. ”I didn’t expect it because they have some very good people involved.

“In fairness to Davy he has a very good set-up there. Some very knowledgeable coaches are already involved and for me to be involved it will hopefully add to my coaching armour and I’ll learn a huge amount from him the way he manages his players and works with the other coaches.

“From that perspective it’s exciting. The chat I had with Davy, he’s a hugely passionate man about hurling, his family and about Wexford, the players and people. It will be great to get the opportunity to go into that world for a few months and get a chance to experience it.

“When you meet somebody new, from Davy’s perspective he wanted to see if we were aligned in our thoughts about coaching and playing the game. Certainly we were in terms of our philosophies. 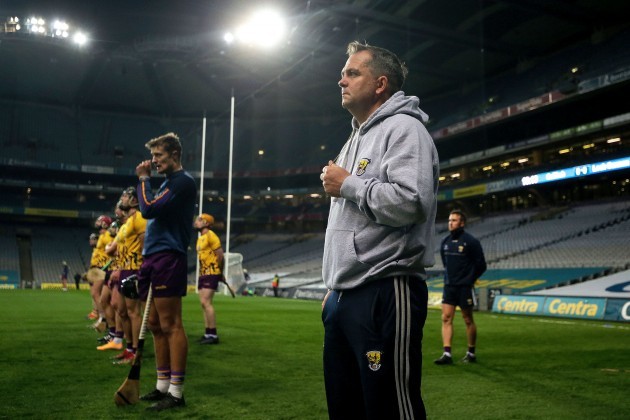 Fitzgerald and his players before playing Dublin in the 2020 Leinster SHC semi-final.

“There certainly are similarities [with Laois]in terms of the possession based game and the importance of using support runners. But also things around how the team is set-up. That’s what Wexford and Davy’s coaches have done, they’ve developed that style further. That for me is the intriguing bit.

“What have they done and how have they done it? Because the players seem to be really bought into Davy, the coaches and the style of play. That’s the important bit for me to be honest.

“I am chomping at the bit to go in and meet the players,” he continues. “I haven’t met them bar a few online calls. I’m just excited to get working with them on the pitch. Wexford are on a very exciting journey and they’ve proven that. They’re on the cusp of an All-Ireland title.”

An All-Ireland winner at minor grade alongside Damien Hayes, Tony Óg Regan and Ger Farragher with Galway in 2000, Corcoran failed to make the breakthrough at senior level in his native county. Work brought him to Dublin where he linked up with Kilmacud Crokes as a games promotion officer, a role he still occupies.

After a few seasons commuting home to line out with Meelick-Eyrecourt, Corcoran transferred to Crokes in 2008. He later described it as “the toughest decision I’ve had to make”.

Within months an injury crisis in the full-back line saw him called up to the Dublin senior panel. The following winter Anthony Daly was appointed as manager of the Sky Blues. Hurling in the capital was about to take off.

National League honours followed in 2011 when they also reached the All-Ireland semi-finals, before they were crowned provincial champions two years later. From failing to make the cut under Conor Hayes and Ger Loughnane in Galway, Corcoran became a prized asset in the Dublin defence.

Like any player turned coach, he took pieces from various managers he played under. None more so than Daly, who he describes as “an icon to me.”

“His style of management was excellent,” explains Corcoran. “He could speak a different language to every player. That’s the bit I tried to take with me in my time with Laois. 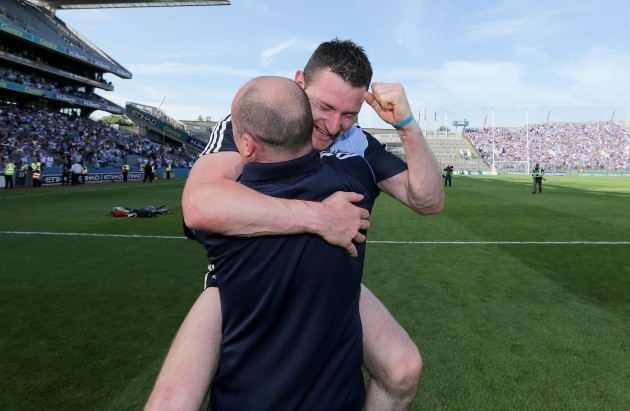 “He’s a hugely motivational manager. He could read the room so well and say the right things at the right time. From a Dublin perspective he really set the standards when he came in.

“I took similarities from my time with Dublin going in to Laois and trying to take ways in how he set those standards and apply them to Laois. I was lucky to play under him to be honest and they’re some of the takeaway bits I’d have learned from Anthony and I still keep with me in my own coaching practice.”

Daly was able to toe the line between maintaining a sense of fun and camaraderie in the group, while also getting the work done required to give them the belief to compete at the top table.

“I certainly think we have to be careful,” Corcoran says of the modern game. “There’s a fine line there between your professionalism and the era of look, by the way lads we’re all doing this because we want to do it. It’s fun. We enjoy it. We want to be here. That’s what Dalo did. He was able to walk that line. He knew when the team needed

“Why are we doing it is the big question? If it’s all going to be how many reps we can do and how many sprints we can do, that’s not the stuff I’ve taken away from my playing career with Dublin, Crokes and even at home with the club.

“The memories I have is about the times where we had the craic to be honest, where we laughed. Yeah we had the big wins, but I think enjoying those as well [is important]. When you reflect back on that, that’s what you have to make sure of as a coach, that you build that in for the players you’re working with. That’s as important as anything you do.”

County titles with Kilmacud arrived in 2012 and 2014. Corcoran retired from Dublin duty at the end of 2016 and he filled the void by studying a Masters in sports psychology in Jordanstown.

“When I finished playing with Dublin, I said I’d try my hand at it. I looked at my bedside locker and I had all these stacks of psychology books and sports psychology so I had a big interest in it. I did that Masters for a year and enjoyed it.” 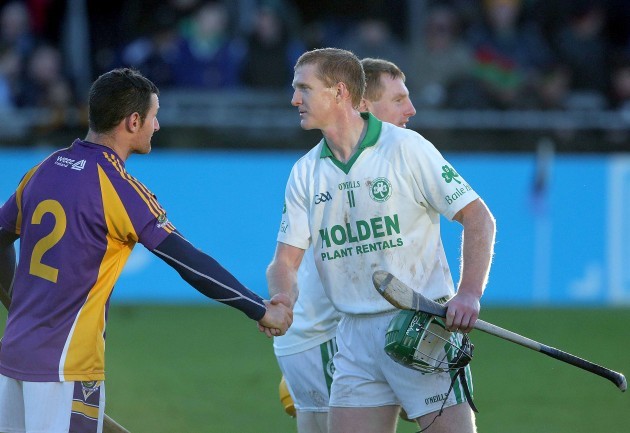 Corcoran shakes hands with Henry Shefflin after the Leinster club semi-final in 2014.

Like many coaches, he has a thirst for learning and adding to his repertoire. He’s currently undertaking a doctorate in elite performance with DCU.

“I’m looking at coach development and using psychological skills of developing excellence. So it’s more a developmental look at youth players and how we develop them through our coaching. So the framework of psychology is the aspect I’m looking at.

“Certainly as a coach I’ve learned that that you have to consider the people you’re coaching, the level you’re at, where they are in their development and what are their needs as opposed to coaching the way you’re coaching and that’s something I’m learning on my journey.

“You’re always picking up that type of stuff from more experienced coaches or practitioners who’ve gone down that journey so there’s definitely so much out there that you have to know what works for as well.”

He worked with various Dublin-based players for individual sessions and coached the Galway camogie side for a season.

Then came Brennan’s offer to join his backroom team in Laois for two enjoyable years.

“I  have to say it was a huge learning experience for me,” reflects Corcoran. “Looking back on it, I certainly learned you can’t just coach one way. My style has certainly changed because you have to adapt your style according to the players you’re working with.

“Players now are more educated, they’ve higher standards and expect more from the coach. This thing of do as I say, that type of thing is leaving the game from a coaching perspective. Certainly at times I’d use that style but other times you have to include players, bring them on board and ask their opinions.

“That bit for me was the big learning bit. Just seeing the players create what they created. Make no mistake, it was the players buying into what Laois were about. They had a certain picture in their minds about how they wanted to be perceived and putting in the work behind the scenes to make they were able to deliver that was the bits for me that really stand out.

“The Joe McDonagh Cup win, the win over Dublin and even going close to beating Clare last year was a symbol of the talent within Laois and, when they apply themselves, what they’re capable of. 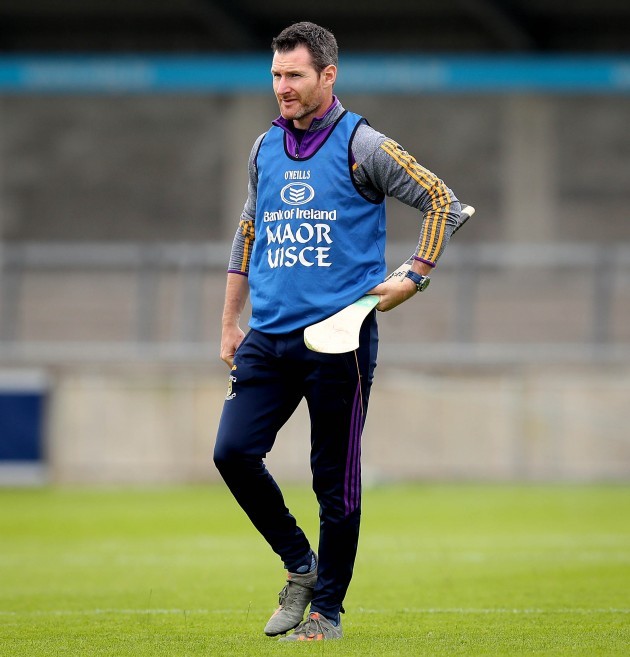 Corcoran during the 2020 Dublin SHC.

He can see similarities in how Brennan and Fitzgerald see the game. Corcoran also points out that having the manager and coach on the same wavelength is paramount for inter-county set-ups.

“Eddie was exactly that way. He was very clear in terms of what he wanted to do. His mantra was very simply that the man in the better position always gets the ball. Our discussions were around how to make that happen. Between Eddie, Tommy and myself we would have had a lot of discussions around that and how we practiced that.

“If the manager and coaches aren’t aligned then it doesn’t work and I think that’s where the initial two hour chat can come in. Then having lots of meetings around how we implement and develop different aspects of our play.

“It’s certainly not a matter of turning up on the pitch and delivering that. There’s a lot of planning and behind the scenes conversations that happen around that. My experience of Laois having Eddie and Tommy involved, that was the way we went about things.

“My initial sense of Wexford is that’s the way Davy likes to do things too. To include all the coaches in the conversation and be able to deliver a plan and ensure we’re all aligned in that plan. Because if we’re not aligned well then you’re giving mixed messages to the players and that’s what you want to avoid.”

Last year at 38 he transferred back to Meelick-Eyrecourt after 12 years with Crokes to line out with his brother and reconnect with some old friends in his home club. He plans on togging out with them again in 2021.

Between his studies, coaching juvenile players in Kilmacud, playing with Meelick-Eyrecourt and his involvement with Wexford, life will get busy for Corcoran when GAA resumes.

But he wouldn’t have it any other way.

Niall Corcoran was a guest speaker at a series of free performance analysis webinars hosted by Performa Sports. The webinars are available to watch back for free at https://www.performasports.com/webinars